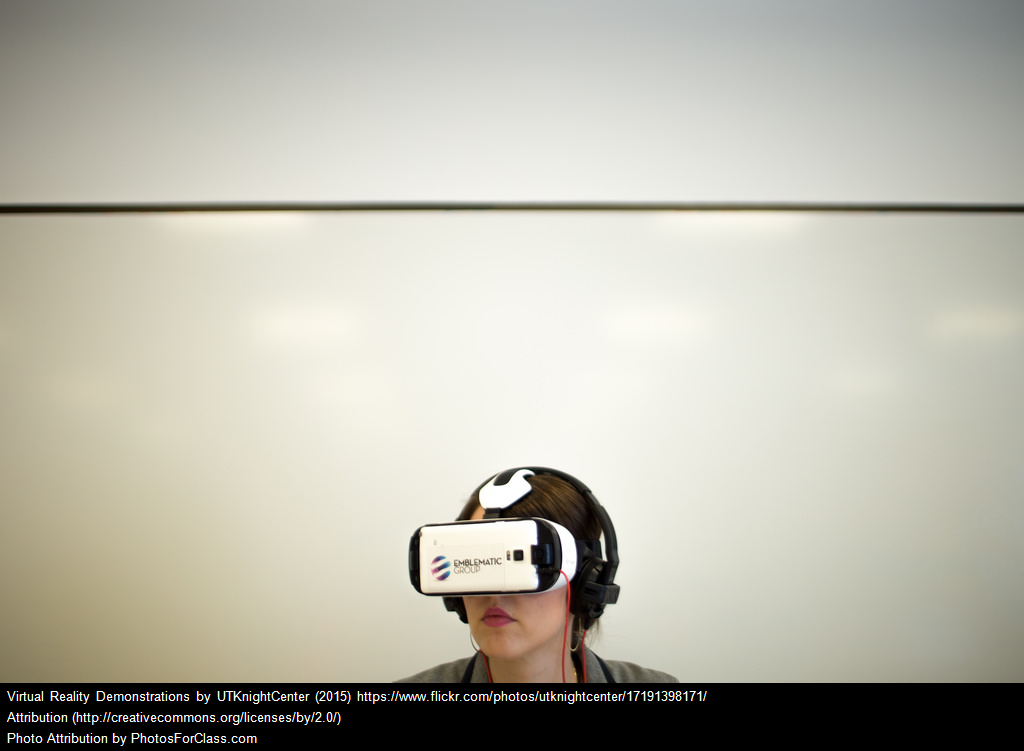 See Everything You Wanted To Know About How We’re Using Virtual Reality With ELLs, But Were Afraid To Ask

Google Expeditions is Now Available on Chromebooks! is from Richard Byrne, and is great news! It’s been problematic for us to use it up to now because students had to have phones, the phones they had needed to be able use the app, and they needed space to download it. Now, we should be able to use it with our Chromebook carts!

My student teachers and I have been making some initial attempts at trying out Google Cardboard with my English Language Learner students (I bought a few plastic ones from IMCardboard – the actual cardboard ones are just too flimsy for my high school classroom).

Unfortunately, the WiFi doesn’t seem up to the task of streaming VR videos. Until we work out that problem, we’re going to experiment with using photos.  One lesson we’re planning to try is to write up a list of the elements that make-up a good VR photo, explore two of them, and then have students write a short argument essay about which one is better (we’re in the middle of an argument essay unit).  Of course, we could do the same exercise with regular photos, but I suspect engagement will be higher doing it this way.

After that experiment is complete, we’ll start using it in our World and U.S. History classes.  I’m still trying to figure out what value-added benefit it gives if we can’t access the VR videos.  All suggestions are welcome (we also have a camera that can take 360 photos, and I’m trying to figure out how we can use that, too).

In the meantime, I thought it would be useful to bring together my past posts about Virtual Reality in education, along with new resources I’ve been collecting.  Feel free to offer your own suggestions.

Is virtual reality ready for school? is from Brookings.

5 Apps to Use with Google Cardboard is from Class Tech Tips.

Ripping Learning off the Page is from Edutopia.

Coincidentally, later today, Richard Byrne is hosting a Google Hangout on this very topic. If you can’t make it, I assume it will be archived (it is, and you can find it here).

Virtual Reality Could Transform Education as We Know It is from Ed Week.

Future Ready: VR, AR, and MR in the classroom beyond the novelty is by Micah Shippee.

Embed 360° photos and Virtual Reality (VR) Content is from Edublogs.

IATEFL presentation : Virtual Reality in the EFL Class is from IATEFL.

Using virtual reality to step into others’ shoes is from The Hechinger Report.

Tips For Getting Started With 360° Photos And Virtual Reality (VR) Content is by Sue Waters.

Augmented Reality vs. Virtual Reality – What’s the Difference? is from Voice of America.

Augmented Reality vs. Virtual Reality is from Richard Byrne.

Google opens Expeditions VR education app to the public is from TechCrunch.

5-Minute Film Festival: Teaching With 360-Degree Videos is from Edutopia.

How to Create Virtual Reality Panoramas is from Richard Byrne.

Google for Education Launches Beta for ‘Create Your Own’ Virtual Reality Experience is from Ed Week.

Google Geo Tools : Virtual Reality in the Language Classroom is from the FLT Mag.

Everything You Need to Know to Get Started With AR/VR in the Classroom is from Ed Surge.

Introduction to Using Google Expeditions in Your Classroom is from Richard Byrne.

Students Can Create Their Own Tours to Share in Google Expeditions is from Richard Byrne.

The Times has published dozens of films that use V.R. technology on topics including exploring Antarctica and Pluto, civil rights issues and the Hiroshima bombing. Here are ideas about how to teach with them!https://t.co/iQxxgGrs1H

The NY Times Learning Network has published Virtual Reality: Realizing the Power of Experience, Excursion and Immersion in the Classroom.

VR – the next big thing in ELT is from Adaptive Learning in ELT.

Teaching Languages in Virtual Reality: Tips and Tools for Getting Started is from FLT Mag.

Augmented Reality in Language Education is from FLT Magazine.