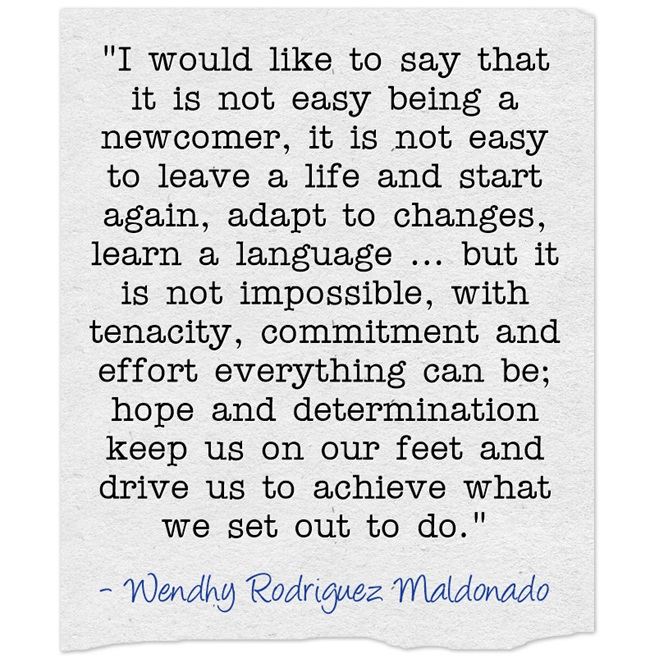 When Wendhy Rodriguez Maldonado was added to my Newcomer English Language Development (NELD) class I could tell that she had native language literacy and significant receptive comprehension. I worried that the Newcomer class would be too low for her.

On the contrary, Wendhy is an impressive scholar who thrived in the class. At the end of the year, she asked to write a reflection. Our newcomers don’t always possess the language to express themselves. I offer Wendhy’s words to all Newcomer teachers. She speaks for your students.

On October of 2016, I started eleventh grade in a new High School, it was the second one since I had moved, I was very happy, I realized change was something I should get used to. Sometimes it is common to perceive it in a negative way, but on the contrary, I think it is not precisely a bad thing, if we open our mind to the possibilities, there are lots of elements we can enjoy if we take the opportunity to expand our horizons.

When I was in my country, I learned basic English, a knowledge that I did not know would help me so much during the process of being a newcomer, or ESL student. Although I could not start a conversation yet, or even understand one, I could recognize several written words and orient myself in a context, and that represented an advantage, nevertheless, there was still much to learn. Initially, the classes did not make too much sense to me, and it resulted frustrating the fact of not understanding, but just like when I was a kid, the senses started to guide me to the comprehension and learning, directed undoubtedly with the help of teachers. I heard and caught some words until I could get an idea. In my first school my English improved a bit, I already had listening comprehension, but I was still struggled with what was perhaps the biggest problem; the speaking, to me, it was incredibly difficult to communicate verbally, I was thinking too much in the order, the words, and something barely coherent was what came out of me, this was a problem, I later understood that in real-world dialogues, no one waits for you. I believed that this could get better with time, but, time passed and I did not seem to progress, so there was something wrong, and I craved to overcome it.

Later I began the next year in another school, and again, my nerves were present in the new environment, I was assigned a schedule with the respective classes, and on my first day, I started with one in particular; NELD. When the door opened, the first thing to greet me was a gentle smile from my teacher who holding a wand in her hands, gave me a “Welcome” and then “Say hi to our new student” whilst the rest of the students greeted me and joined in the class. In that moment, I was aware of what was happening in my mind; after of all the difficulties that had been presented for so long, that my eyes were appreciating that colorful and cheerful classroom, full of friendly and enthusiastic people was very welcoming, it was a breath of fresh air, I felt as if a big weight fell from my shoulders. As the days passed, that room began to feel like home, and I am sure that as I had perceived it, so had the rest of my classmates. 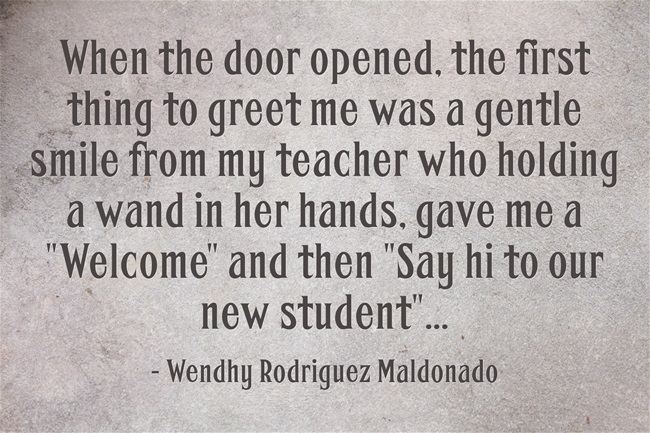 During the lessons, a word was always present in my mind; dynamic, yes, because if I could choose a word to describe the class it is definitely that one. I perfectly remember that on that first day, I made a little poster with my name and country written on it, in that way, the others could identify me, and I also to them; we read aloud, wrote in a sheet, and got up to read that writing to another partner that had “Similar shoes to ours”. There were students from many countries; Siria, Cuba, Japan, Congo, Bolivia, Sudan, Mexico… I had never shared with so many cultures in one place, it was fascinating. Our English was not perfect, some of us were just beginning, and others had a little more experience, but in that instant, it was English what united us, the desire for learning, and no matter how much or little we could say, we had a teacher that exhorted us to learn and that through her amusing methods of teaching helped us to improve every day, and even to teach others; when we least expected it, we were already talking to our classmates and participating in the lessons.

From the first moment, we did a lot of activities in just a few minutes of learning a day, some of them were, for instance: silent and aloud readings, writings, News in Levels, Kahoot! games (Pure adrenaline, everyone’s favorite), watched some videos and even made crafts on special dates. We made letters, posters, and also analyzed a written work and met its author, traveled to a plantation, a historical evidence, and met an archaeologist. Because all these activities were according to our age and context, they were engaging, motivated us and allowed us to know each other as a group, and to understand what was around us; our school, community, state, country and, in general, the world, and what I personally appreciated, was learning all this but preserving our identity and culture. I must mention that a very important part at this stage was undoubtedly doing a presentation, they were free will, therefore, each student had the freedom to choose one of the two topics given, or any other they wanted to explain. I always believed that our room was a good example of cultural diversity and integration and that as each person is a world, it was composed of stories. At this point, I felt the reality as never before, I witnessed vivid and profound stories and experiences, I reflected, I learned, and I admired all the young people who, in front of me, spent a few minutes explaining a little of their lives, or that of some mode is part of them. They took my tears and smiles too because it was a source of inspiration. The values of our base and the knowledge of our best instrument to reach our goals. Sitting there at my desk, I was very fortunate.

When I started at NELD, my teachers and counselor, thought that perhaps taking the class would not be meaningful to me because I had previous knowledge and an intermediate level of English, however, I took the class for a lapse, and I finished it along with the school year. I would like to say that it is not easy being a newcomer, it is not easy to leave a life and start again, adapt to changes, learn a language … but it is not impossible, with tenacity, commitment and effort everything can be; hope and determination keep us on our feet and drive us to achieve what we set out to do. Words are not enough to thank all the participants of our learning, before and now, who with love and benevolence spend time in teaching, a beautiful work. Teachers and people like you make it simpler, and for us, it means a lot to have your support.

I’m glad I could take NELD, it was and will always be one of the best experiences, regardless of the level of knowledge that is owned, opportunities to learn something new are inexhaustible, classes are a place to which all contribute and receive mutually, where minds grow, as well as people. Thank you, thank you very much for allowing me to be part of it, I will always appreciate it.

Guest Post: How to Scaffold the RACE Writing Strategy for Newcomer English Learners