A Look Back: Our School Is Not ‘Flush With Cash’ & Our Students Are Not ‘Deprived Of All Knowledge’ 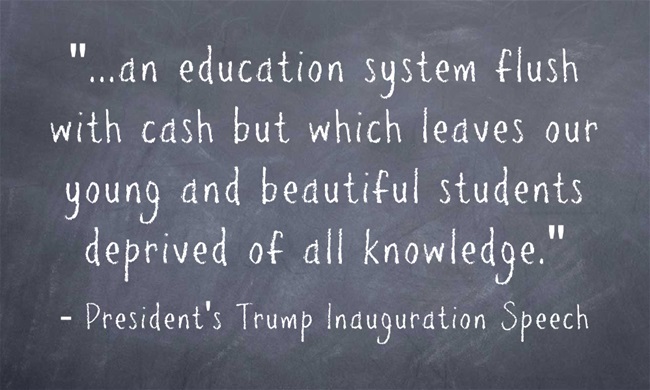 President Trump didn’t say much about schools in his Inauguration Speech, but the little he did say was inaccurate, bombastic, and pretty insulting to a lot of us. That particular section is highlighted at the top of this post.

Libby Nelson at Vox has a useful, though not perfect, analysis of it (see Trump’s vision of education begins and ends with schools being bad), so I’m not going to say much more (You can also read this Ed Week piece).

The Best Data On How Much Money Teachers Pay Out Of Their Own Pocket – What Do You Spend?

Trump defenders have begun sharing this chart, which education researchers have been dismissing for a long time as one of the worst and most inaccurate they have seen. You can read more about it at my previous post, Education Research & “The Graph That Will Never Die.”

A Look Back: Here Are Covers For The Three Books We’re Editing: Math, Science & Social Studies