The Best Teaching Resources For The Movie, “Coco” 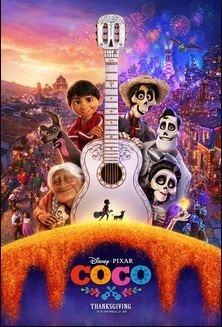 Disney’s movie, Coco, is out in the theaters, and I’m certainly looking forward to seeing it!

It also seems like a potential great teaching and learning resource, both using many of the language-learning strategies found in The Best Popular Movies/TV Shows For ESL/EFL, as well as for more critical discussions on how cultural traditions are used commercially (Disney initially attempted to copyright the term, “Dia de los Muertos.”). After the ensuring uproar, they made big attempts at being as “authentic” as possible in their story line.

I’ve previously created a similar list for another movie: The Best Resources – Critical & Positive – For Teaching With “Moana”

Here’s what I have so far, and I’ll be adding to it – feel free to offer additional resources in the comments section:

Pixar’s Coco is sweet, visually stunning, and much too predictable is the Vox story where I learned about Disney’s ill-fated copyright attempt…

You can find a ton of clips at the movie’s official site.

‘Coco’: A Latino-themed movie that gets it right is from NBC News.

They release this short prior to the movie’s release, and I’ve used it with my ELL students:

With ‘Coco,’ Pixar sets out to broaden US narrative on Mexico is from The Christian Science Monitor.

‘Coco’ forced Pixar to dive deep into a real-world culture — and add some diversity is from The Washington Post.

How Pixar Made Sure ‘Coco’ Was Culturally Conscious is from The NY Times (available in English and Spanish).

We hear from @laloalcaraz, a consultant for Disney’s new movie, @pixarcoco, which debuts in the states on Thanksgiving weekend. https://t.co/9bzRihEWUi

“Coco” has opened a discussion about death with a younger audience, and it introduces them to the beliefs of a different culture https://t.co/fKHebBUbqd

Three Videos On This Year’s “World’s Best Teacher: A Palestinian”

Quote Of The Day: “The Satisfaction Of Teaching…”