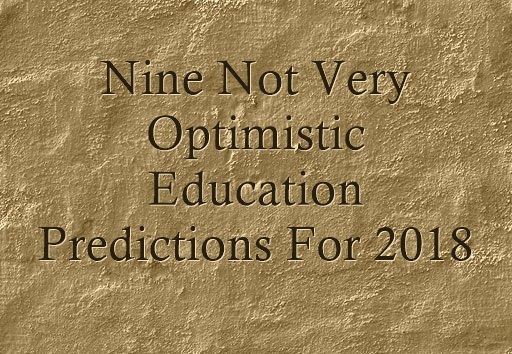 Valerie Strauss at The Washington Post always publishes my annual predictions list, and she’ll reprint it in late December.  Here’s an early peak at it.

Here’s my annual list of predictions for the upcoming year.  Though they’ve taken a decidedly pessimistic turn since the election of President Trump, there are still a few positive ones among them.

Let me know which ones you think are right or wrong-headed and share your own in the comments section.

* Now that Justice Neil M. Gorsuch is seated, the U.S. Supreme Court will be set to deal a major blow to teachers, students and their families – and public employee unions everywhere – when they rule on the Janus case.  The five-to-four decision will eliminate requiring worker payment of union fees – even though they benefit from union organizing and negotiations.  Schools across the country will have to deal with its disastrous consequences, and everyone can see a preview by learning about what happened in Wisconsin when legislators passed a similar law.

* Two of the biggest foundations in the U.S., the Gates Foundation and the Chan Zuckerberg Initiative, recently announced plans that appear to focus less on “top-down” emphasis and more on community-driven ones.  I’m predicting that one will actually learn from their past mistakes and genuinely work with educators on the ground – and not only charter supporters – while the other will fall back into bad habits.  However, I’m not ready to say which is the one that will genuinely follow-through with its good rhetoric.

* Hate crimes against people of color – particularly against Muslims – will continue to rise. As The Washington Post pointed out after the 2017 FBI report on hate crimes was published: “…it’s noteworthy that many of the groups against whom crimes rose by double digits were the focus of inflammatory rhetoric by Donald Trump over the course of his presidential campaign.”  There is no sign that rhetoric is decreasing, and more and more teachers will be supporting our students and their families defend themselves against these attacks.

* States will finally begin implementing their plans to comply with the Every Student Succeeds Act. Most efforts will go relatively well or, at minimum, elicit a “meh” from educators on the ground.  However, there will be one exception – how schools comply with the law’s emphasis on schools “reclassifying” English Language Learners as proficient in the language. Notwithstanding what might be good intentions behind the law, ESSA will begin to have a dangerous impact on ELLs as schools feel pressured to “meet the numbers” and reclassify ELLs who still need extra support.  These practices will be similar to how schools “gamed” student test scores during the No Child Left Behind era.

* More academic studies will be published supporting the effectiveness of restorative practices as a school discipline strategy (particularly in high schools); the substantial impact of teacher bias on student discipline; and the inadequacies of standardized test scores to accurately measure student growth. The new research on restorative practices will help continue its momentum, the studies on implicit bias will help overcome resistance to that concept from at least some educators, and the work on standardized tests will have absolutely no impact at all.

* Congress and Trump Administration will come to an agreement to all the “Dreamers” under DACA to stay in the United State permanently.  However, immediately after signing the bill, President Trump will direct that 150,000 child immigrants who came here as unaccompanied minors fleeing violence be deported. His order will be challenged in court and ultimately be ruled illegal.  In the meantime, however, high stress levels among many of our students will go even higher and provide additional challenges to learning.

* This next one is a guarantee – residents of Flint, Michigan, including children, won’t have access to safe water from the tap – they won’t have it until 2020.  This tragedy, which obviously impacts local schools, has spurred communities across the country to look at their own pipes and water, especially at schools.  Some progress will be made over the next year, but not enough.  Just as Flint as faded from the front pages, interest in local communities will decrease, as well.

* In an effort to stave off losing Congress, the Trump Administration and Congress will delay further moves on degrading the safety net that so many of our students and their families depend on, and this will include forgetting about repealing Obamacare and promoting school choice. Their strategy will be successful: Democrats will only narrow the Republicans’ majority by a net-gain of one seat in the Senate and by picking up fifteen in the House.  Those results should mean an even pessimistic list of predictions from me for 2019.

* I borrow this last one from educator Bill Ivey every year. He predicts that “each and every school day will bring tens of thousands of reasons to celebrate in schools across the country.” That sure sounds good to me…

You might want to review my previous years’ predictions and evaluate the quality of my foresight:

The Best Mobile Apps For The Classroom: An Open-Ended Crowdsourced List

The Best New Sites Students Should Use With Supervision