The Best Education “Year-In-Review” Round-Ups For 2017 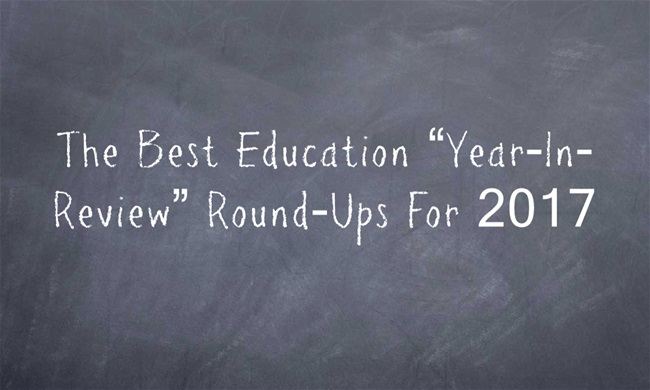 This is one of my last year-end “Best” lists and, as holds true for all my lists, I’m being pretty picky about what ends up here.

The Best Education “Year-In-Review” Round-Ups For 2016

The Best Education “Year-In-Review” Round-Ups For 2015

Here are my choices – so far (I’ll be adding more over the coming week as they are published elsewhere):

Of course, Alexander Russo’s Best education journalism of 2017 has to be top on this list.

Writing Prompts, Quizzes, Lessons and Graphs: Our Most Popular Teaching and Learning Resources in 2017 comes from The New York Times Learning Network.

The Best of 2017 is from Teaching Tolerance.

Top 10 Educational Leadership Articles of 2017 is from ASCD (hey, my article, Student Engagement: Key to Personalized Learning, is on that list!).

My The best — and worst — education news of 2017 appeared in The Washington Post.

Ed Week has a ton of them, including:

The Teaching Profession in 2017 (in Charts)

Ed Week also published a list of their most popular videos of the year, and this one I did with them about “Transfer Of Learning” made the list!

DeVos In Charge, Teacher Well-Being And Chronic Absence: Our Year In Review is from NPR.

Must-Read Education Stories From 2017 is from The Atlantic.

9 Charts That Show What Education in America Is Like in 2017 is from The Atlantic.

This week we’ve been highlighting some of our top articles and videos from 2017. Before the ball drops, here’s a recap of the 10 most read, retweeted, discussed, and loved Edutopia posts of the past year. #BestOf2017

Teach English, Teach About The Environment

Reading Strategies, Student Engagement, & The Question Of “Why?”