Which Christmas Message Should We Be Sending? 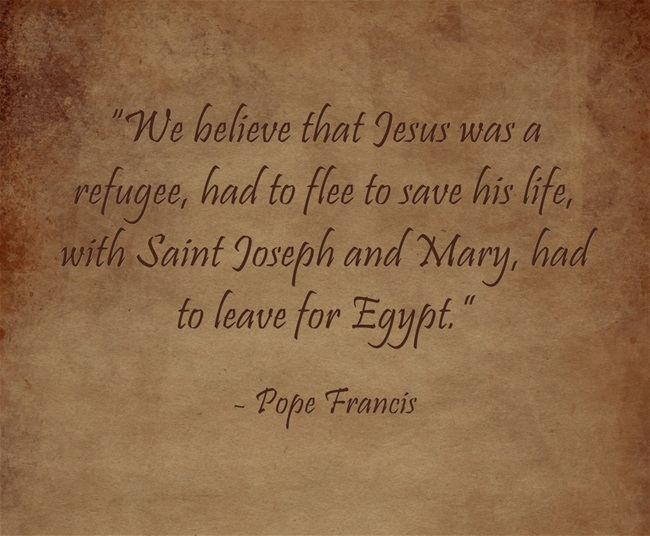 (from Pope Francis: ‘Jesus Was A Refugee’)

As Christmas approaches, it might be worth taking moment away from its commercialization to consider what it recognizes:

The newborn child was a refugee. His parents had traveled a great distance from one jurisdiction to another in obedience to a political mandate they did not fully understand. Exhausted from a long day’s journey, they sought lodging but were turned away, so they took shelter in a stable. Amid farm animals, the labor pains began and the woman gave birth.

(from The story of Christmas makes it clear: Welcome the refugee in the L.A. Times)

It might also be worth considering the messages being put out by the Trump Administration these past few days about immigration. I suspect that I’m not the only person struck by irony/tragedy/sadness:

Mr. Trump then began reading aloud from the document, which his domestic policy adviser, Stephen Miller, had given him just before the meeting. The document listed how many immigrants had received visas to enter the United States in 2017.

More than 2,500 were from Afghanistan, a terrorist haven, the president complained.

Haiti had sent 15,000 people. They “all have AIDS,” he grumbled, according to one person who attended the meeting and another person who was briefed about it by a different person who was there. Forty thousand had come from Nigeria, Mr. Trump added. Once they had seen the United States, they would never “go back to their huts” in Africa, recalled the two officials, who asked for anonymity to discuss a sensitive conversation in the Oval Office.

And, this, from Vox’s article, Donald Trump just compared legal immigrants on diversity visas to trash:

“They give us their worst people, put them in a bin… they’re picking the worst of the worst, congratulations you’re going to the US.”

The Trump administration is considering measures to halt a surge of Central American families and unaccompanied minors coming across the Mexican border, including a proposal to separate parents from their children, according to officials with knowledge of the plans.

What message do these Trump Administration comments and actions send to our immigrant and non-immigrant students and their families?

Where You Can Send Donations To Help Sandy Hook Victims

Wash. Post Published My Education Decade In Review AND Predictions For Next Ten Years