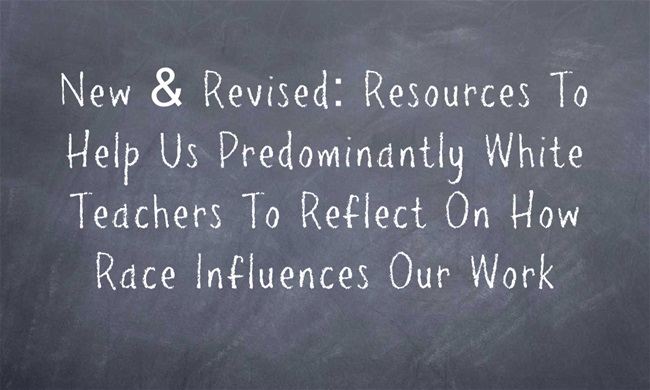 Many of the resources on that list are there using Storify, a tool that will be going off-line soon.  So, I’m using that change as an opportunity to cull and re-organized those links over the next few months into a series of “New & Revised” Best lists.

This is the third one (New & Revised: The Best Resources For Understanding Why We Need More Teachers Of Color was the first and New & Revised: A Collection Of Advice On Talking To Students About Race & Racism was the second. You might also be interested in The Best Resources About “Culturally Responsive Teaching” & “Culturally Sustaining Pedagogy” – Please Share More!).

Obviously, race influences our work in many ways, including in segregation (see The Best Resources For Learning About School Desegregation (& Segregation) – Help Me Find More).

This list is more specifically designed to provide resources to help us reflect on how race and racism can affect our day-to-day actions in the classroom:

We Should Be Obsessed With Racial Equity is a post I wrote that includes many links related to teacher implicit bias.

On the Importance of Mirrors for Students (and Teachers) appeared in The Huffington Post.

‘White Educators Must Sharpen Their Humility’ Before They Discuss Race is the headline of the final part of a three-part series in my Ed Week Teacher column.

Schools’ Discipline for Girls Differs by Race and Hue is from The New York Times.

Read This: “Teachers More Likely to Label Black Students as Troublemakers” is by Renee Moore.

On Racism and White Privilege is from Teaching Tolerance.

Approaching Racial and Cultural Sensitivity is from Edutopia.

10 Ways Well-Meaning White Teachers Bring Racism Into Our Schools is from Everyday Feminism.

‘Racial Mismatch’ May Affect Which Students Are in Class is from Ed Week.

Morning Video: Controversial Atlanta Teacher-Student Dance Video is from Alexander Russo, who then links to a very interesting post by Christopher Emdin.

Questioning Payne is a good piece from Teaching Tolerance. I’m adding it to The Best Critiques Of Ruby Payne.

Principals Share Advice on Addressing Racial Bias in Schools is from Education Week.

Teacher perceptions and race is from The Brookings Institution.

Depressing Statistic Of The Day: Many White Teachers Have Low Expectations Of Black Students

Depressing Statistic Of The Day: Schools With Police Officers But No Guidance Counselors

7 findings that illustrate racial disparities in education is from The Brown Center.

The insidiousness of unconscious bias in schools is from Brookings.

Beyond Bias: A series examining efforts to recognize and overcome discrimination in schools. http://t.co/8AF7SR8AXb pic.twitter.com/aW5YxmhTy1

Study: Black Girls Are Being Pushed Out of School — required reading post-Spring Valley, by @karenbates https://t.co/Bu8IjkhDO8

Conscious or not, bias creeps into the way teachers discipline students, and that has serious consequences: https://t.co/jTTs1PancW #equity pic.twitter.com/2gWLkvRCbD

Excellent & important: 10 things every white teacher should know when talking about race https://t.co/Xr2rhdxN0D

When Whites Just Don’t Get It, Part 2 is by Nicholas Kristof at The New York Times.

When Whites Just Don’t Get It, Part 3 is by Nicholas Kristof at The New York Times.

When Whites Just Don’t Get It, Part 4 is by Nicholas Kristof.

Racial Bias, Even When We Have Good Intentions is from The New York Times.

Color-Blindness Is Counterproductive is from The Atlantic.

“I’ve never been so disgusted by my own data,” says author of study showing reactions to “black-sounding” names: http://t.co/NTAxyrgKRm

My Grandmother Who Escaped Nazis Told Me to Always Speak Up. So, I’m Calling Out Racist Teachers. appeared in Education Post.

Everyday Equity in the Classroom: A Start is by Josh Parker and appears in Ed Week.

Disproportionality in student discipline: Connecting policy to research is from Brookings.

The myth about smart black kids and “acting white” that won’t die is from Vox.

Why Schools Fail To Teach Slavery’s ‘Hard History’ is from NPR and it has an accompanying interactive quiz.

Some Tips for a White Teacher Trying to Stop Being Racist is by Tom Rademacher.

How Inclusive Is Your Literacy Classroom Really? is by Tricia Ebarvia.

Racial Microaggressions Perpetuate Inequity: An Infographic is from The University of North Carolina.

Man @JamilSmith dropped the mic in the opening paragraph’s of the new @Time’s issue with #BlackPanther on the cover. pic.twitter.com/R3U2a1653M

BRYAN STEVENSON ON WHAT WELL-MEANING WHITE PEOPLE NEED TO KNOW ABOUT RACE is from The Pacific Standard.

When Is it Time for a Hard Conversation? is by Elena Aguilar.

The ‘Belief Gap’ Prevents Teachers From Seeing the True Potential of Students of Color is by Lee-Ann Stephens.

Q & A with Ebony Elizabeth Thomas: Why children need more diverse books is from Penn GSE.

Everyone Keeps Talking About Implicit Racial Bias But What Is It? is by Tom Rademacher.

Harming Students with “Slave” Assignments is by Kelly Wickham Hurst.

Checklist: 8 Steps to Creating a Diverse Book Collection is from The Open Book.

Q&A Collections: Race & Gender Challenges is the headline of one of my latest Education Week Teacher columns. It includes links to all Classroom Q & A posts from the past seven years on race & gender challenges – in one place!

Black children subjected to higher discipline rates than peers is from Eureka Alert.

Why white teachers don’t like talking about a lack of diversity. is by Anne Schwartz.

To Future White Teachers, Here’s a Resource Guide So You Don’t Have to Ask Your Co-Workers to Explain Racism is by Tom Rademacher.

How Can White Teachers Do Right by Students of Color? is by Justin Minkel.

Building Anti-Racist White Educators, an initiative based in @CaucusofWE & @TAGPhilly, just sent out our first monthly discussion guide using an article/podcast by @Angela_Watson. Check it out! #PHLed #barwe215 https://t.co/hY3scXG14R

I updated my post on teachers who use “tribe” to refer to the students in their classrooms. I learned that a lot of teachers use a “Tribes Learning Community” program, and that is part of the update: https://t.co/4vaWxVLJ91 Pls share w teachers.

Robin DiAngelo: White people are still raised to be racially illiterate. If we don’t recognize the system, our inaction will uphold it. is from NBC News.

Follow up: This presentation #DisruptTexts did https://t.co/tPknRNQ7gy ! “When you don’t want to change, ask: what are you maintaining?” YES! Thank you @triciaebarvia @nenagerman @TchKimPossible @juliaerin80 This is not just about lit. curriculum, it is for ALL teachers! #critlib

And here’s a related post from Pernille Ripp: Small Disruptions in Text.

WOW! CHECK OUT PROPUBLICA’S “MISEDUCATION: IS THERE RACIAL INEQUALITY AT YOUR SCHOOL?”

Check out these great resources at the website of Robin DiAngelo, author of “White Fragility.”

Checking Yourself for Bias in the Classroom is from Teaching Tolerance.

GREAT REFLECTION: “THINGS WE (ALL EDUCATORS) NEED TO LEAVE IN 2018”

Q and A: How White Educators Can Move Beyond ‘White Fragility’ is from Ed Week.

How to Discuss Race With Black People: FAQ Part 1 — Beginner appeared in Medium.

“What Does It Mean to Be Young, Black, and Female in America?” is a three part series at my latest Education Week Teacher column.

Must Be Nice…… is by Shana White.

9 THINGS EDUCATORS CAN DO TO LIBERATE THE MINDS OF BLACK CHILDREN is by Sharif El-Mekki.

“WE ALSO SHOULDN’T LET WHITE PEOPLE OFF THE HOOK”

What’s My Complicity? Talking White Fragility With Robin DiAngelo is from Teaching Tolerance.

Here’s What I Wish White Teachers Knew When Teaching My Black Children is from The Education Post.

Why Diverse Texts Are Not Enough is by Tricia Ebarvia.

White Teacher, Here’s How You Can Successfully Partner With Black Families is by Sharif El-Mekki.

How to Be an Antiracist Educator is by Dena Simmons.

NEW PBS NEWSHOUR VIDEO SEGMENT: “HOW THESE OREGON TEACHERS ARE FIGHTING BACK AGAINST WHITE NATIONALISM”

Nazi Symbols and Racist Memes: Combating School Intolerance is from The NY Times.

Black Boys and White Educators is by Kassandra Minor.

Video Interview With Authors Of “Stamped: Racism, Antiracism and You” PLUS Free Teaching Guide

Teachers Are People Too: Examining the Racial Bias of Teachers Compared to Other American Adults is from AERA.

TED has just released this video on YouTube, and you can read the transcript here.

What should educators know about implicit bias? is from Ed Week.

Educator bias is associated with racial disparities in student achievement and discipline is from Brookings.

How the racism of ‘good’ teachers can hurt kids is from The Hechinger Report.

The Best Resources On Class Instruction In 2017 – Part Two

Good Advice On “De-Escalating Power Struggles In The Classroom”