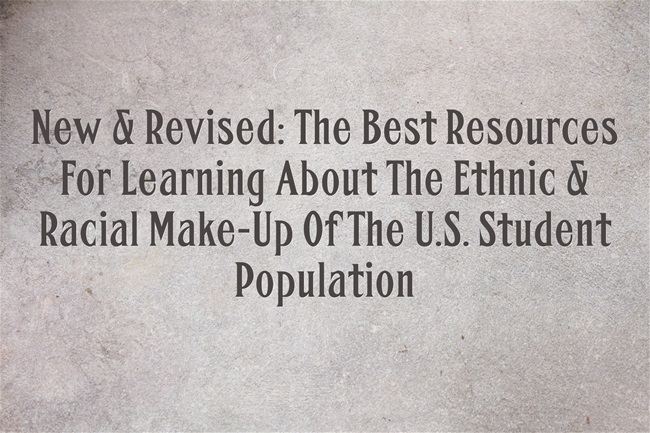 Many of the resources on that list are there using Storify, a tool that will be going off-line soon.  So, I’m using that change as an opportunity to cull and re-organize those links over the next few months into a series of “New & Revised” Best lists.

New & Revised: The Best Resources I’ve Used In Lessons About Race & Racism is where you can find most of my re-organized resources, and I’ll be adding a link to this post over there.

For specific date on the English Language Learner population, you can explore The Best Ways To Keep-Up With Current ELL/ESL/EFL News & Research.

Here are resources for learning about the make-up of the changing student population in the U.S.:

Dept. of Ed. projects public schools will be ‘majority-minority’ this fall is from The Pew Research Center.

AMERICA’S SCHOOLS ARE MAJORITY-MINORITY. NOW WHAT? is from Slate.

Education by the Numbers is from The NY Times.

Fast Facts is from The National Center For Education Statistics.

STATISTIC OF THE DAY: STUDENTS OF COLOR NOW COMPRISE MAJORITY OF K-8 POPULATION

Children of color projected to be majority of U.S. youth this year is from The PBS NewsHour.

Suburban Public Schools Are Now Majority-Nonwhite. The Backlash Has Already Begun and The ‘Dramatic’ Demographic Shifts Reshaping Suburban Schools: 7 Key Data Points to Know are both from Ed Week.

National Education Data: K-12 Enrollment More Racially Diverse Compared to a Decade Ago is from The 74.

Here’s How I Ended My Classes This Year