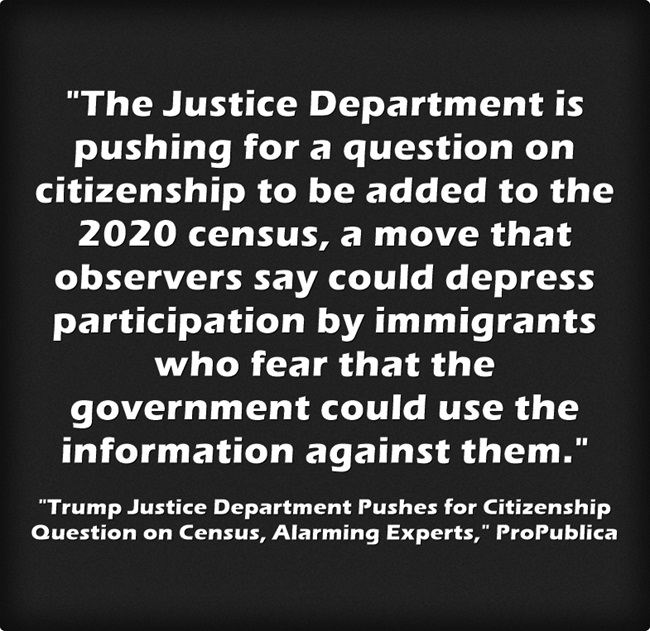 This post was originally titled “Terrible Idea: U.S. Justice Dept. Proposing That Questions About Immigration Status Be Included In Census.” I changed it after more and more attention was brought to this…terrible idea.

Make no mistake: This action is designed to erase our undocumented friends, family, students, and educators from the #2020Census. It’s unconstitutional and unconscionable. https://t.co/95Z0e4b2o6

Most up-to-date update: TRUMP ADMINISTRATION ABANDONS PLAN FOR CENSUS CITIZENSHIP QUESTION – GREAT FOR OUR COUNTRY & GREAT FOR MY LESSONS NEXT YEAR, TOO!

Boy, that’s sure to increase the odds that people will want to answer Census questions – NOT!

During the last Census, my English Language Learner students organized a neighborhood campaign, including bilingual materials they produced, to encourage immigrants to complete the Census. It’s always a challenge to get high participation rates in immigrant communities – both because of language and trust issues. But it’s critical to get as many people as possible to answer because of the resources it can bring into those areas.

But, really, who would trust that the Trump Administration wouldn’t use data from that question against immigrants?

The question that could sabotage the census is a CNN piece on the same issue.

Critics Say Asking About Citizenship Could Wreck Chances for an Accurate Census is from The NY Times.

The Controversial Question DOJ Wants to Add to the U.S. Census is from The Atlantic.

Why Asking About Citizenship Could Make the Census Less Accurate is from The New York Times.

Secret use of census info helped send Japanese Americans to internment camps in WWII is from The Washington Post.

Are you a citizen? Here’s what happens if you lie on the census. is from NBC News.

Adding the citizenship question to the census represents at best extreme recklessness, and at worst the weaponization of statistics, upending a basic constitutional command, says @_justinlevitt_ https://t.co/FpHaKsUvQP

17 states and 6 cities have sued the Department of Commerce over the citizenship question on the 2020 Census. https://t.co/ZfBzxBYZ8w

What to know about the citizenship question the Census Bureau is planning to ask in 2020 https://t.co/3gbf0HSqpc pic.twitter.com/0K5Y7Q3aXV

If the addition of a citizenship question to the 2020 census reduces participation of noncitizens, here are the states that could be affected most: https://t.co/xAAg9NC57L pic.twitter.com/Tu2I3eJkOc

The best explanation of the Census citizenship question (by far) by @DLind. Don’t form an opinion without reading this (or update appropriately). https://t.co/QN1kqRNqZF

Our Article of the Day Q’s help students understand what’s at issue in Trump’s decision to add a Q about citizenship to the US census: https://t.co/thxeXIIIPG

Judge rules Ross can be deposed over Census citizenship question

The Supreme Court agreed to hear the census citizenship case. Here’s why that matters. is from The Washington Post.

Some Japanese-Americans Wrongfully Imprisoned During WWII Oppose Census Question is from NPR.

The Citizenship Question Isn’t Quite Dead Yet is from The Atlantic.

A Supreme Court Case That Will Affect Every Aspect of National Life is from The Atlantic.

Citizenship questions on the census have no historical pedigree is from The LA Times.

K-12 Aid at Stake in Suit Over Census’ Citizenship Question is from Ed Week.

See 200 Years Of Twists And Turns Of Census Citizenship Questions is from NPR.

How The Citizenship Question Could Break The Census is from Five Thirty Eight.

The Census Adds the Citizenship Question is a good infographic.

Adding a citizenship question to the 2020 Census would undercount Hispanics and put hundreds of millions of dollars in federal funds at risk for some states. https://t.co/3YMIb3xMoL pic.twitter.com/NYzLbn7Xd6

Why do educators care about the #2020Census?
$14 billion+ in Title I grants for 24+ million students;
$11.3 billion in special education grants;
$13.6 billion for the National School Lunch Program;
Funds for Head Start
Teacher quality grants#WeCount.https://t.co/FxP97sIosJ

LA schools supe out with a reaction: “If the question is eventually included, it could lead to a loss of as much as $20 million every year in Title I funding,” he says. “The citizenship question is not some abstract, legal issue. It has real consequences in our schools.” pic.twitter.com/96m4pm5vD1

Why The U.S. Counts People Without Documentation For Congressional Districts is from NPR.

NY Times Video: “The Secret History of Muslims in the U.S.” – This Seems Like Something Every Teacher Would Want To Show