What?! Teacher Tells African-American Student He Will Be Lynched If He Doesn’t Do His Work 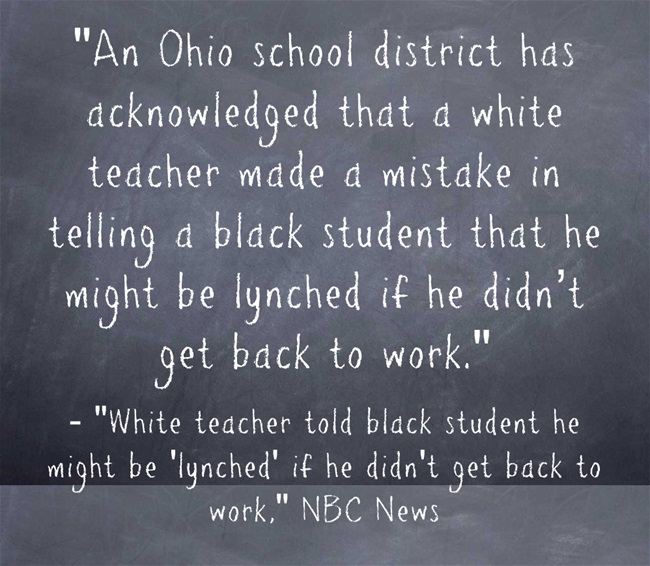 White teacher told black student he might be ‘lynched’ if he didn’t get back to work from NBC News and Mason Middle School teacher won’t be suspended or fired for ‘lynching’ comment from Cincinnati.com tells a crazy story.

Here, in the teacher’s own words, is what she said:

“I said to him, (redacted) get to work,” Thole wrote. “Your classmates are tired of you costing them points. When you come in tomorrow without your homework completed, you (sic) classmates are going to be angry and then become a mob who will want to lynch you.”

This is the day after a teacher at a private Christian school in Wisconsin gave out an assignment asking students to least three “good” reasons for slavery. See School Homework Asks Kids To Give 3 ‘Good’ Reasons For Slavery.

Combine these incidents with President Trump’s comments today (What Message Does It Send To Our Students When President Of U.S. Calls African Countries & Haiti “Sh_tholes”?) and, if we didn’t have enough reasons this Martin Luther King, Jr. Day to reflect on the role of racism in our country and what we need to do about it, we sure have more now….

An Ohio teacher who told a black student that his friends would "lynch" him if he didn't finish his work has been put on leave https://t.co/qRyF6XLbzK pic.twitter.com/jOQZph9M3I

Video: “What if America Was Never Colonized?”

Resources On The Tiananmen Square Protests