NOTE: This post was originally headlined “Quote Of The Day: Teen Shooting Survivors Call For Change.” However, because of its importance and subsequent articles appearing in the media, I turned it into a “Best” list… 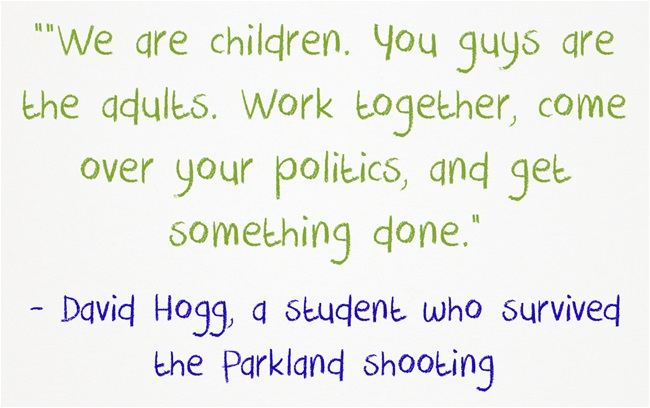 The Righteous Anger of the Parkland Shooting’s Teen Survivors is a very interesting, and inspiring article, on The Atlantic’s site today.

The video, for those who are asking. pic.twitter.com/KCCfuiFhQK

A loud, new voice after the latest school shooting: Kids wanting to know why adults hadn’t done more is a similar piece that appeared in The Washington Post.

A ‘Mass Shooting Generation’ Cries Out for Change is another article in the NY Times.

In wake of another shooting, calls for a national school walkout is from The San Francisco Chronicle.

COURAGEOUS GRIEVING AND THE TRAGEDY IN PARKLAND is from Wired.

You might also be interested in Florida School Shooting Tragedy Resources, Including Advice On Talking With Students.

And here’s a related video:

Updated with much more on the role of student voice: Resources for Talking and Teaching About the School Shooting in Florida https://t.co/jidXkeBpk9 #edchat

Perspective: The students at Florida’s Douglas High are amazing communicators. That could save lives. https://t.co/YaYqPm4cNm

Florida student Emma Gonzalez to lawmakers and gun advocates: ‘We call BS’ is from CNN.

Speaking publicly at a rally, Emma González, a senior, pledged that her school would be the site of the nation’s last mass shooting. How could she know? Because, she said, she and her peers would take it upon themselves to “change the law.” https://t.co/ihuobqsAwv

Survivors of the Florida school shooting announce a nationwide, student-led march in Washington on March 24 to push for gun control https://t.co/k7YyNnzd8k

“Our job is to go to school, learn and not take a bullet. You need to figure this out. That’s why you were unfortunately elected.” pic.twitter.com/BJ3et4rKrI

Student Emma Gonzalez’s message to Congress: “This is our fight now, because you messed it up so badly that you left it to the kids. Now it’s our job, and you can’t try to take that back from us.” pic.twitter.com/7PwYCpJUmH

So far, Parkland is *not* fading from the news the way that mass shootings usually do. (The graph shows Google searches for the term “gun control”.) The students speaking out makes a pretty big difference. pic.twitter.com/8IcJuJ6yTS

My parents chose Parkland to settle in because of the high school’s stellar reputation, and because we thought that it was a safe place to live. But that isn’t true anymore. The promise of safety and security failed us. https://t.co/lj1sHIse73

.@MomsDemand and @Everytown along with @GiffordsCourage applaud Parkland students hosting marches in DC and across the country on March 24. Join us: https://t.co/ekhfMsm6yg #marchforourlives

He survived the Florida school shooting. He vows not to return to classes until gun laws change. is from The Washington Post.

Florida students plead with Congress: It’s about the guns is from The Washington Post.

Why Parkland students have emerged as a powerful political voice is from The Washington Post.

Quote Of The Day: “…Marjory Stoneman Douglas High really could be the last school shooting in America”

Teens ‘Lie In’ At White House To Protest For Stronger Gun Control https://t.co/NDGivM1UvU

Children have changed America before, braving fire hoses and police dogs for civil rights is from The Washington Post and is today’s “must-read” article of the day. 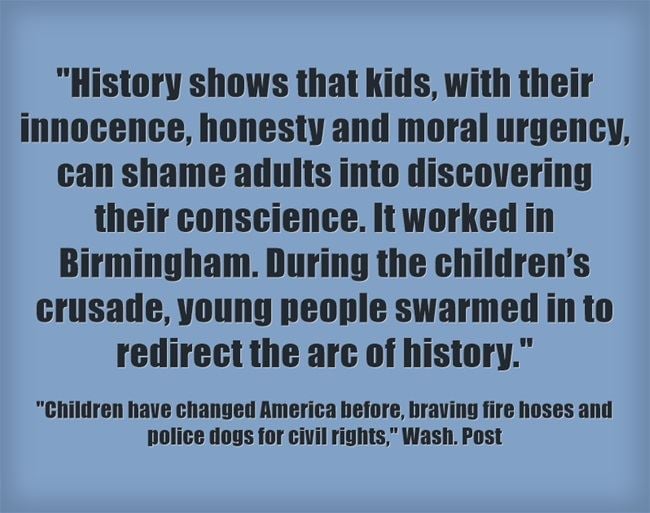 Students in Miami-Dade and Broward counties are walking out of school to protest for gun reform. These kids are incredible. ✊
pic.twitter.com/ApWdOvzadz

“This is what democracy looks like.” Tallahassee, Florida. pic.twitter.com/iZhqXnnNfO

Here’s What It’s Like At The Headquarters Of The Teens Working To Stop Mass Shootings – BuzzFeed https://t.co/JLQeGG9jeG via @nuzzel

The Incredible Teenagers From Stoneman Douglas High School Are Giving America the Conversation About Guns It Desperately Needs to have https://t.co/C5Er9TY99H pic.twitter.com/oO8Vy01cya

Quote Of The Day: Shooting Survivor Wants Her School To Be Remembered For Starting “A Revolution”

The Power of the Parkland Town Hall is from The Atlantic.

Watch this video on The Scene.

The Parkland Students Aren’t Going Away is from The Atlantic.

When it comes to guns, the Parkland shooting survivors aren’t here to play nice is from The L.A. Times.

The conspiracy theories about the school shooting survivors in Parkland, Florida have roots dating to the civil rights movement https://t.co/c9UYTrsMT3

Political scientists and scholars of student activism say there are several key factors driving the new movement for gun reform. One of them is the affluence of the kids speaking out, @aliaemily reports. https://t.co/6h0oRIAAEB pic.twitter.com/YmfaoI0feY

Parkland is sparking a difficult conversation about race, trauma, and public support https://t.co/g1Gw9t6n8F

How did students turn the Florida school shooting into a movement? “We know how to use social media.” https://t.co/j3YahY548F

In one short week, the students of Marjory Stoneman Douglas High School have modeled power, eloquence, truth-telling, and hope. Via @Slate The Student Teachers https://t.co/OA1JNsd3t2

I wrote about the CNN town hall, the Parkland students and the teenage superpower of not knowing what you’re not supposed to be able to do: https://t.co/ZHBf320BOc

Delta, United Airlines and Metlife are among the companies who have cut ties with the NRA https://t.co/aCYMzKcXHU

“We need to do something. And you know who is doing something? These amazing high school students. Oh my god, what a force to be reckoned with.” pic.twitter.com/vnHho9Z6aN

After the shooting in #Parkland, FL, high school students around #America are getting organized and politically active. Here’s a state-by-state list of where 16 and 17 year-olds can #preregister to vote. Share it wide. https://t.co/RD9kSMi8Ab pic.twitter.com/Cs8zwj47LL

Quote Of The Day: Parkland Student Emma González On Her Organizing Efforts

How Parkland Students Changed the Gun Debate is from The Atlantic.

How the student activists of Marjory Stoneman Douglas High demonstrate the power of a comprehensive education. is from Slate.

Baltimore students face gun violence daily. But will their voices be heard in the student-led #NeverAgain movement? pic.twitter.com/xsPrT8pK28

The teenage strategy sessions that built an anti-gun movement out of the trauma of Parkland in one week https://t.co/E7CbffY4QN pic.twitter.com/M4m8pj24SO

(1/4)Yesterday, the members of @AMarch4OurLives got to meet up with some of the most wonderful and most strong spoken students of Chicago. “Florida’s safest city” and one of the cities in America most affected by gun violence came together to share stories, ideologies, and pizza. pic.twitter.com/3SIDgvAnDM

“I don’t even want more school resource officers. Do you know the racial discrepancies they have against African-American and Latino students? We’re going to create a system where we widen the school-to-prison pipeline.”
— David Hogg https://t.co/Dq8JI8WEOB via @outline

Students calling for change after the Parkland shooting is from 60 Minutes.