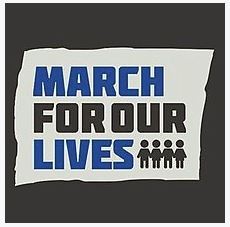 Survivors of the Parkland shooting and students from around the country are organizing The March For Our Lives on March 24th in Washington,D.C. and in other areas to protest against gun violence.

Here is a beginning list to learn about the March – I’ll be adding more in the future:

The March For Our Lives official site.

March for Our Lives: Everything you need to know about the #NeverAgain event is from ABC News.

Dear National Rifle Association: We Won’t Let You Win. From, Teenagers. appeared in The NY Times.

March for Our Lives falls on 20th anniversary of deadly Jonesboro school shooting is from ABC News.

Sensing their moment, Florida students balance school and activism planning the March for Our Lives is from The LA Times.

This Columbine survivor is now a mom, teacher. Here’s why she’s headed to March for Our Lives. is from ABC News.

‘The march is just the start’: Parkland students and lawmakers speak out about gun violence is from The Washington Post.

“We, the youth of the United States, have built a new movement to denounce gun violence and call for safety in all of our communities. This is only the beginning.” @Emma4Change pens a searing op-ed on this generation’s plans to make change: https://t.co/MV34GJgrdI #NeverAgain pic.twitter.com/FWTpOD1WKL

Students hope the March for Our Lives sends a message that their generation has arrived: “It’s going to look scary to politicians” https://t.co/Z25bf3PNnK

The March For Our Lives is Saturday. Here’s what you need to know. https://t.co/S7YiZylYEa

Students are gearing up for the nationwide March for Our Lives on March 24. “Our parents and grandparents did not succeed in ensuring our safety at school. So we must do it ourselves,” write three organizers of New Jersey’s march. https://t.co/Gw6uWCeFD4

Perspective | Our kids were murdered at Sandy Hook. We’re marching for them this weekend. https://t.co/OPskyQZXX4

Latino students, families mobilize for the ‘March for our Lives’ is from NBC News.

THE BRIEF: DOWNLOAD THESE POSTERS FOR MARCH FOR OUR LIVES is from Ad Age.

You’ll be able to watch it live on this NBC feed:

‘When you march this weekend, don’t forget the teens who face gun violence every day.’ via @seventeen #MarchForOurLives https://t.co/ZTf7QWmcWf pic.twitter.com/bsSCs8JYJh

“I am here to acknowledge and represent the African American girls whose stories don’t make the front page” –Naomi Wadler, 11-years-old pic.twitter.com/SMDgcPHHtg

Photos from the #MarchForOurLives protests around the world https://t.co/FlH4sFfhhY pic.twitter.com/wOnW0db6Ql

March for Our Lives’s Edna Chavez speaks for the kind of gun violence that doesn’t make front pages https://t.co/Y7UNsLPsST

Aerial footage shows the turnout at various March for Our Lives events across the US today https://t.co/K4g34viFVh pic.twitter.com/Iu8266uwGi

“Never give up. Never give in. Keep your faith and you’re going to have a victory.” Rep. John Lewis who marched with MLK, speaking at #MarchForOurLives rally in Atlanta pic.twitter.com/AcBKXzixr8

“I am here to acknowledge & represent the African-American girls whose stories don’t make the front page of every national newspaper, whose stories don’t lead on the evening news,” says Naomi Wadler, an 11-year-old from Alexandria, Va. https://t.co/jujbxM0M4i #MarchForOurLives pic.twitter.com/3lLhpHhDby

The 6 most memorable speeches at the March for Our Lives in D.C. https://t.co/fMIfkbaV2o @MrSmall215 That little gal’s speech is on here.

Video: “The Doomsday Clock Is Closer to Catastrophe Than Ever Before”