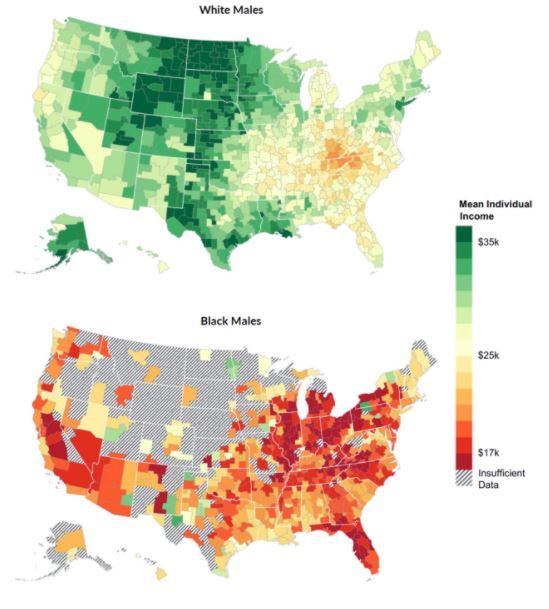 The Equality of Opportunity Project unveiled a huge new study on race and economic inequality today. And The New York Times did a big interactive explanation of it.

Forget Wealth And Neighborhood. The Racial Income Gap Persists is from NPR.

Here are some useful tweets:

Another policy takeaway: Promoting marriage will not solve this inequality. Black boys with two parents at home still fare worse than white boys with a single mother who earns *less*.

The incarceration data in this study is staggering. Sons of black millionaires were as likely to be incarcerated during the 2010 census as sons of white families earning about $36,000. pic.twitter.com/miek6O1LVN

That doesn’t mean that we shouldn’t pursue mobility strategies. But we have to be conscious that moving kids to opportunity doesn’t mean they can easily access it.

One of the most startling findings to me was the perfect parallel between these two lines. The adult income gap between black + white men holds whether they grow up poor, rich or anywhere in between. pic.twitter.com/WyXKQ0z2vO

Vox also just came out with a good text explanation: The massive new study on race and economic mobility in America, explained

Race, not just poverty, shapes who graduates in America — and other education lessons from a big new study is by Matt Barnum.

We (by which I mean @KevinQ) made more charts comparing income mobility for girls, Asian Americans and other groups. There's also a tool here for you to make your own chart — pick the categories and watch what it means to grow up in America: https://t.co/IJFc0SjfAL

New research on social mobility is incomplete. Let’s shift the scrutiny from the plight of black people to the privilege of white people. We must end the policing of black love and marriage. https://t.co/x2oqjGgCMl via @BrookingsInst #diversity

My Best Posts On New Research Studies In 2011 — So Far