Linda Brown, Of Brown vs. Board Of Education Case, Dies – Here Are Resources About Her Life 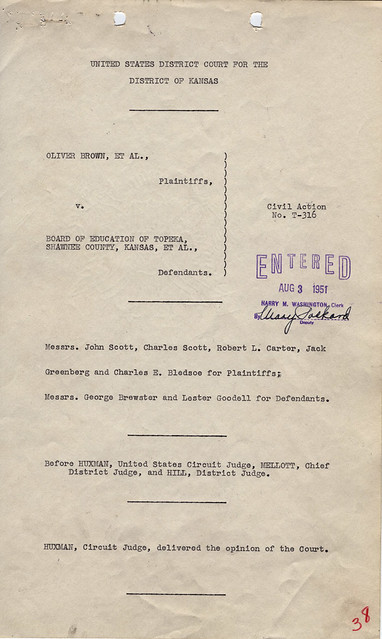 Linda Brown, the plaintiff in the Brown vs. Topeka Board Of Education case that brought down (legally, at least) school segregation, has died.

BREAKING: Linda Brown, who as a little girl was at the center of the 1954 Brown v. Board of Education Supreme Court decision that ended school segregation in the United States, has died at age 76. Details: https://t.co/LoTwrLFqks

Here are some additional resources about her life:

Here’s a biography from The Biography Channel.

Linda Brown, the central figure of the Brown v. Board of Education case, has died

Linda Brown has died. The Kansas schoolgirl came to symbolize the transformative Brown v. Board of Education desegregation ruling of 1954.https://t.co/fLOrl9Pisn

Linda Brown walked about a mile each day, bypassing the nearby white school, just to catch a bus to attend the all-black Monroe School. Her push against school desegregation inspired a landmark 1954 court ruling. Her family announced her death Monday. https://t.co/noQ8Qg6z7g pic.twitter.com/fhT5iCa5by

You want to honor her memory? Her fight? Her heroism? Do something about the segregation — the separate and unequal education — that most black children still experience. Otherwise, stop pretending you honor her, because you don’t.

Linda Brown’s death is a reminder of how much segregation still exists in America’s schools https://t.co/JMx9jDwo7t https://t.co/twU8AL3kTb

Linda Brown and the Unfinished Work of School Integration is from The New York Times.

A Visit To Topeka: Reflecting On Linda Brown’s Legacy is from NPR.