Santa Fe High School & Illusion Of An American “Can Do” Spirit 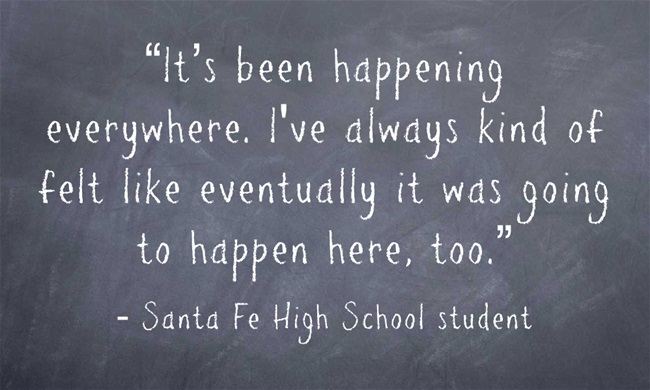 Heartbreaking moment as Santa Fe High School student is asked if she thought a shooting ‘would not happen’ at her school:

“It’s been happening everywhere. I’ve always kind of felt like eventually it was going to happen here too.” https://t.co/kymFDSH6D5 pic.twitter.com/0akC5liZn4

I guess the American “can do” spirit doesn’t apply to saving our students from gun violence, even though we know how to effectively deal with the problem:

An ever-growing body of research consistently reaches the same conclusion: The only variable that can explain the high rate of mass shootings in America is its astronomical number of guns https://t.co/tH1B5vqaJ5

And one of those solutions is not reducing the number of entrances to schools:

I’d also encourage you to read This Is School in America Now, which just appeared in The New York Times.

Unfortunately, I’ve had to post numerous other related school shooting resources that you can find at:

A Collection Of “Best” Lists Related To Schools, Students & The Fight Against Gun Violence

Statistic Of The Day: Hey, Teachers, Maybe We Can Give Our Students A Break As We Enter Great Depression Territory?