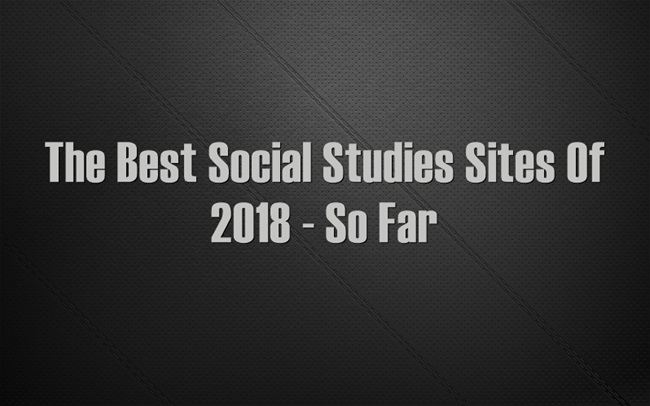 Here are my choices for The Best Social Studies Sites Of 2018— So Far:

As you probably know, Starbucks closed all their company-owned stores to have their staff be trained on racial bias. They’ve now made their curriculum public, and you can view the videos and download the materials at The Third Place: Our Commitment, Renewed. I’ve added it to to New & Revised: Resources To Help Us Predominantly White Teachers To Reflect On How Race Influences Our Work and to New & Revised: The Best Resources I’ve Used In Lessons About Race & Racism.

Not Very “Best” Lists Of The Week: Gun Violence

“Best” Lists Of The Week: Tools For Teaching About Economics & Jobs

And here are some new Social Studies “Best” lists I’ve posted over the past few months:

The Best Tools For Comparing Demographics Of Different Countries

Google unveiled a “3D digital archive of endangered wonders of the world—a lasting record of monuments at risk of disappearing.” Check out Open Heritage. I’m adding it to The Best Sites For Learning About Various “Seven Wonders”

Matthew Desmond is author of the amazing book, Evicted. He also just unveiled a new called called The Eviction Lab. It’s an interactive map that can give you a detailed report (even by Census Tract!) about history of evictions taking place in what looks like any community in the U.S. You can also read more about it in this New York Times article, In 83 Million Eviction Records, a Sweeping and Intimate New Look at Housing in America. It will be an indispensable tool for any class that is analyzing/comparing neighborhoods, like the annual lesson my Intermediate English class does, A Lesson Highlighting Community Assets — Not Deficits. The Lab also has a Teacher’s Guide, though I’m less impressed by that than I am the actual Lab.

Bomb Blasts is a new interactive tool that – in terrifying detail – lets you see the impact a nuclear bomb blast would have anywhere in the world, including in your neighborhood. It also shares information on how the public can learn more about how to reduce the risk of their use. I’m adding it to The Best Sites For Learning About Nuclear Weapons.

Americans is an online interactive exhibit from The National Museum of The American Indian. I’m adding it to The Best Sites For International Day Of The World’s Indigenous People, where I’ve included many other resources on Native Americans.

Geography Writing Frames For ELLs (They Can Be Used In Other Subjects, Too)

What Unites Us is a new and impressive Washington Post interactive. It includes people from each of the fifty states sharing their perspective of what unites our country. It’s also divided into thematic categories. I’m thinking that they could be used as models for students to share their own perspectives. They could also write/say their critiques of what different people said.

The Pudding created an interactive map – with audio – where you can see and listen to the number one song (in December, 2017) in 3,000 locations around the world. It’s pretty cool. I’m adding it to The Best Sites For Learning About The World’s Different Cultures.

How the World Expresses Itself in GIFs is a particularly creative and insightful feature in The New York Times. Not only do they show the GIFs, but also provide a very interesting analysis. It’s an obvious new addition to The Best Sites For Learning About The World’s Different Cultures.

Deliverance From 27,000 Feet is the headline of a New York Times article and interactive that tells a tragic story of climbers and body removal at Everest. I’m adding it to The Best Sites For Learning About Mount Everest.

The New York Times has published a series of 360 videos on “The New Seven Wonders.” You can see all of them by clicking here and scrolling down.

Advice From Ta-Nehisi Coates To Teachers

As I’ve mentioned before, I haven’t always been the biggest fan of iCivics, the popular learning games site begun by former Supreme Court Justice Sandra Day O’Connor. I’ve thought that many (but not all) of their games have been overly-complicated, and they really put their foot in it with a horribly-done one on immigration (see Sandra Day O’Connor’s Site To Change Immigration Game Because Of Your Comments). Last year, however, they began to make some very positive changes (see iCivics Steps Up Its Game Big Time With Free Virtual Classrooms & Primary Source Interactive). They’ve followed those moves with another good one that is highlighted in The Washington Post: Spanish-language video game aims to teach students about civil rights. Yes, they’ve produced a Spanish and an English version of the same game, Do I Have A Right?

National Geographic has a nice “This Day In History” feature. It shows an image, along with an accessible short narrative description of the event. What makes it stands-out, though, from other sites on The Best “Today In History” Sites list is that it also provides “tags” that lead you to related educational resources and lesson plans.

“Reading Through History” has a large selection of short, well-done videos about U.S. and World History. Importantly, the audio narration is slow (with accurate closed-captions), which makes them accessible to English Language Learners.

USA Learns is on many “Best” lists, including The Best Online Homework Sites For English Language Learners – Please Offer Your Own Suggestions. It’s an excellent – and free – resource with several interactive courses for different levels of English Language Learners. They’ve just added a new feature – a course to prepare users for the U.S. Citizenship test. Not only is it great for students who are studying for that test, but it also would be helpful to those who are in U.S. History classes. I’m adding this particular addition to The Best Websites For Learning About Civic Participation & Citizenship.

Core Knowledge has released their elementary school History and Geography curriculum, and it is free to download and use.  I doubt if most educators would want to use it all “as is,” but it certainly has some resources from which to pick-and-choose.  You can read more about it at Education Week.

I have some concerns about Laurene Powell Jobs’ effort to reinvent high schools  (see The Best Articles For Learning About Laurene Powell Jobs’ Project To Redesign High Schools). However, her organization has just released an online tool students can use to explore possible interest in various careers.  It’s called Sokanu and seems fairly engaging and somewhat useful. I wish the descriptions of the different careers was a bit more engaging than a long piece of text, though. Nevertheless, I’m adding it to The Best Websites For Students Exploring Jobs and Careers.

Brainpop videos are good, and I have a teacher’s subscription to them. But you have to pay in order to see them. Simple History is a YouTube channel that provides a decent selection of comparable – and in some cases, better – animations. They don’t offer the extras, like quizzes, offered by Brainpop. And if your school or district pays for Brainpop, the additional student creation options are great. However, if you’re in a school that doesn’t pay for it, and you’re already spending your money on a ton of other school-related resourced (see The Best Data On How Much Money Teachers Pay Out Of Their Own Pocket – What Do You Spend?), then Simple History is worth a look.

A Collection Of “Best…” Lists On Vocabulary Development