The Best Online Learning Games Of 2018 – So Far 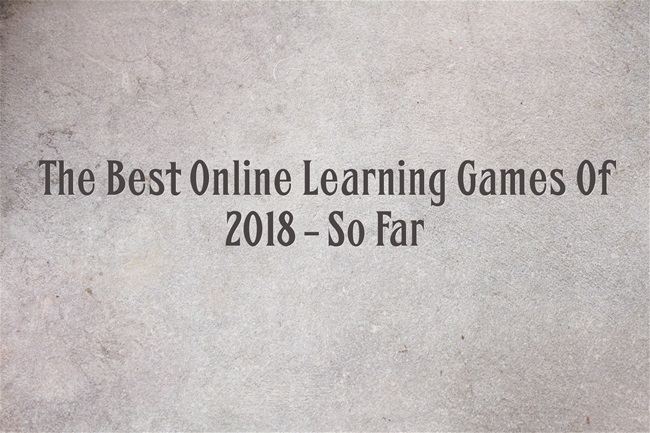 * be seen by me during the first six months of 2018. So they might have been around prior to this time, but I’m still counting them in this year’s list.

Here are my choices for The Best Online Learning Games Of 2018- So Far:

Google launched a a word game called Semantris. Basically, your shown a bunch of words in blocks. Then, you type in a word that you think is related in some sense to one of the words in the boxes. Google’s Artificial Intelligence then tries to guess which word the one you typed in is connected to and, if it’s correct, the blocks get higher. I’m not saying it’s the best word game in the world, but I think Intermediate and Advanced ELLs would find it useful and fun.

Free Rice, the venerable online vocabulary game that is operated by the United Nations World Food Programme (and has been on The Best “Cause-Related” Online Learning Games forever) now lets teachers create virtual classroom and track student progress. To be fair, it may have had this feature for a very long time, but I just learned about it. I’m adding this info to The Best Sites Where Students Can Work Independently & Let Teachers Check On Progress.

Fake It To Make It is an online game about fake news. I’m adding it to The Best Tools & Lessons For Teaching Information Literacy – Help Me Find More.

As I’ve mentioned before, I haven’t always been the biggest fan of iCivics, the popular learning games site begun by former Supreme Court Justice Sandra Day O’Connor. I’ve thought that many (but not all) of their games have been overly-complicated, and they really put their foot in it with a horribly-done one on immigration (see Sandra Day O’Connor’s Site To Change Immigration Game Because Of Your Comments). Last year, however, they began to make some very positive changes (see iCivics Steps Up Its Game Big Time With Free Virtual Classrooms & Primary Source Interactive). They’ve followed those moves with another good one that is highlighted in today’s Washington Post: Spanish-language video game aims to teach students about civil rights. Yes, they’ve produced a Spanish and an English version of the same game, Do I Have A Right?

Game On! is a Quizziz/Kahoot-like game that is primarily, though not exclusively, focused on Geography. I learned about it from the Teacher’s Tech Toolbox. I was having some issues with it when I tried it out, but I assume it was just a temporary glitch. I’m adding it to The Best Online Geography Games.

GameBuilder lets you create lots of different types of learning games – see the screenshot above to see the options. Once you create it, anyone with its url address can play. The site also has a large collection of games created by its users. The site is sponsored by Wisc-Online, which “is a creation of Wisconsin’s Technical Colleges and maintained by Fox Valley Technical College.” And it’s free! I’m adding this site to The Best Websites For Creating Online Learning Games.

Aquation is a game unveiled by the Smithsonian. Here’s how they describe it:

It’s probably not accessible to Advanced ELLs and proficient-English speakers, but it’s a useful game, nevertheless. I’m adding it to The Best Resources For Teaching & Learning About World Water Day.

The Best Sites To Learn About The Hindu Festival Of Holi

The Best Online Learning Games To Play During Distance Learning – Share Your Additions!