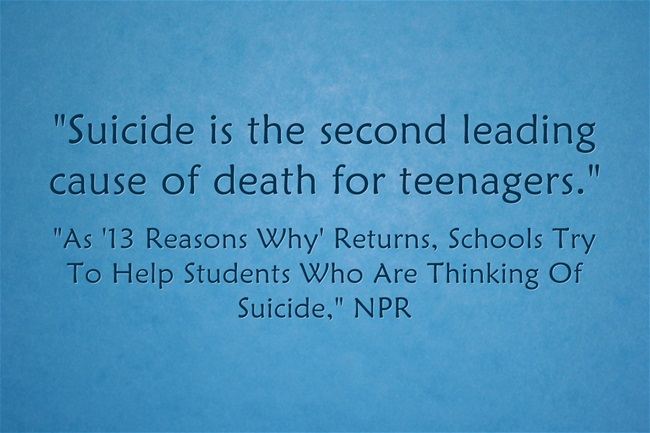 With the suicides of two celebrities over the past two days, this issue is obviously in the news.

Educators can find useful related in information at:

As ’13 Reasons Why’ Returns, Schools Try To Help Students Who Are Thinking Of Suicide from NPR.

Resources for suicide prevention, post-attempt survivors and their families is from TED Talks.

US suicide rates have risen sharply over the past 20 years.https://t.co/MKAw4itiOr

With two high-profile suicides this week, you may be thinking about how you can be there for students in crisis. In this edition of The Moment, you’ll find some strategies for supporting students and helping them support each other. https://t.co/XzFpdELSdq pic.twitter.com/TFepFKxWHq

“Preventable Tragedies” Is An Important Article To Read About Suicide

What Educators Need to Know About Suicide: Contagion, Complicated Grief, and Supportive Conversations is from Ed Week.

NEW PBS NEWSHOUR VIDEO: “HOW THE WAY WE TALK ABOUT SUICIDE CAN PREVENT IT FROM HAPPENING AGAIN”

NOT GOOD STATISTIC OF THE DAY: TEEN SUICIDE RATE INCREASES

Teens are increasingly depressed, anxious, and suicidal. How can we help? is from Vox.

TERRIBLE STATISTIC OF THE DAY – SUICIDES INCREASE AMONG TEENS

I treat teens who attempted suicide. Here’s what they told me. is from Vox.

The Pandemic Has Researchers Worried About Teen Suicide is from NPR.

Suicide Prevention: What Teachers Can Do is from Cult of Pedagogy.

Suicide Is Rising Among Younger Students. Here’s How Schools Can Prevent Tragedy is from Ed Week.

Nearly Half of LGBTQ Youth Seriously Considered Suicide in the Last Year, Survey Finds. A Simple Strategy Could Save Lives is from Th 74.

The Best Sources For Advice On Using Flip Video Cameras

No Surprise Here: Study Shows Teachers In U.S. Are Underpaid