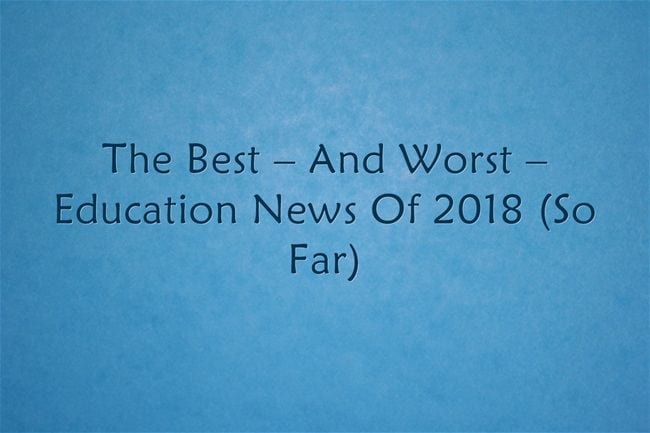 I usually just do year-end education news “round-ups,” but a whole lot has happened in the first six months of 2018. As usual, I don’t presume to say it’s all-encompassing, so I hope you’ll take time to share your own choices. I’ll list the ones I think are the best first, followed by the worst. It’s too hard to rank them within those categories, so I’m not listing them in any order.

*The Gates Foundation admitted that, after spending $575 million on pushing teacher evaluation efforts, the policies they were pushing didn’t work.  The good news isn’t that they wasted their money.  Instead, the good news might be that a failure of that magnitude might reduce their level of hubris going forward.

* The amazing organizing led by teachers in West Virginia, Kentucky, Oklahoma, Arizona, Colorado, and North Carolina for both increased salary compensation and more state support for education is a model to all of us.

* School shootings are tragic and are highlighted in the “Worst News” section.  However, how students have channeled grief and anger into organizing against gun violence has to be listed here under “Best News.”

* I’ve been long-concerned about The manipulation of Social Emotional Learning and what can often be its lack of connection to racial equity issues. The Aspen Institute just published a report raising those issues very eloquently: Pursuing Social and Emotional Development Through a Racial Equity Lens: A Call to Action. I have questioned the value of some of the reports Aspen has put out about SEL, but I think this one should be studied by every school that thinks they are emphasizing SEL at their site.

* A misleading “graph that never dies” is often used by opponents of school funding to supposedly show that, despite evidence, additional education monies do not help students. At long last, two education journalists published accessible explanations about how that graph, and other versions of it, are wrong. You can read Matt Barnum’s article here and Matthew Di Carlo’s here.

* New York City Mayor Bill de Blasio has initiated an effort to make the city’s specialized high schools more diverse.  A similar effort is going on in our Sacramento school district.  We can only help that these are just tips of the iceberg, and that schools around the country will create initiatives to increase the number of students of color in academically advanced programs/schools.

* Horrible school shootings, at Parkland and at Santa Fe High schools, along with others, make The Onion’s headline, “No Way To Prevent This,” Says Only Nation Where This Regularly Happens, a regular truism.  However, the “Best News” section highlights the incredible organizing done by students in response to gun violence.

*The Supreme Court ruling in the Janus case is a huge blow to teachers unions, educators, students and their families.  On the face of it, letting people gain the benefit of union representation without having to pay for it is just not fair.  But it’s safe to say teachers unions are here to stay.  As the saying goes, “Don’t mourn – organize!”

* The terrible Trump Administration policy of separating refugee parents on our southern border from their children has rightfully resulted in widespread revulsion, including from educators. These families must be reunited, the children need to attend school, and their requests for asylum must be given due process.

* The planned closure of 265 schools in Puerto Rico is certainly not going to help families there recover from Hurricane Maria.  Plenty of research has shown the negative impacts that school closures have on students and communities – in fact, a new study just came out last month.

* Teacher pay is terrible.  Fortunately, as you can see in the “Best News” section, educators around the country are successfully organizing to change that situation.

* The Trump Administration is proposing to merge the Education and Labor Departments.  It’s a bad idea, and won’t go anywhere.  I wish I could say that about of the Administration’s policies.  And speaking of bad ideas, Secretary of Education DeVos has proposed eliminating the federal office supervising English Language Learners.  After all, there are only five million ELL in our nation’s schools – why should there be a federal office looking out for them?

* Secretary DeVos certainly did not make millions of students and their families feel safe when she initially said that it was up to individual schools if they wanted to report undocumented students to immigration authorities.  She finally admitted that she was wrong, but it’s not like immigrant families need more reasons to feel insecure.

* Speaking of the federal Department of Education – they have begun dismissing hundreds of Civil Rights complaints.  They are taking these actions, and others, despite a Government Accountability Office report finding racial disparities in school discipline. By the way, you can check out if there have been complaints at your school at this ProPublica data base.

Best and worst education news of 2015 — a teacher’s list

Best and worst education news of 2014 — a teacher’s list

The best and worst education news of 2013

Can You Boil Down Well-Known Education Books To One Sentence?

The Best Resources For Learning About – & Supporting – The West Virginia Teachers