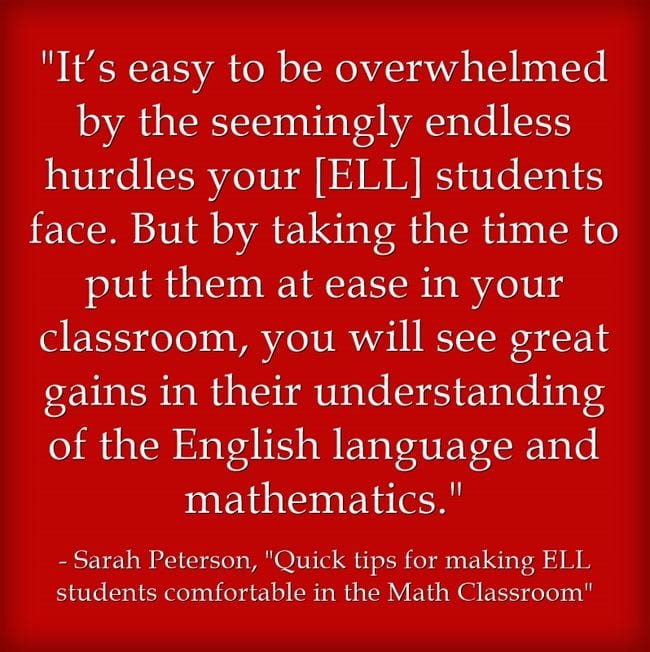 The first in the series was “Speaking of Math: It’s time to talk in class” by Alycia Owen.

The third was  Teaching Math To English Language Learners by Hannah Davis.

The fourth was Supporting ELLs in Math Instruction by Nicholas Pesola

Sarah Peterson is a mathematics teacher for 10 years in the New York City Public Schools.  She has taught Algebra 1 and Geometry to the ELL and SPed population throughout her career.  Sarah can be reached via email, speterson@marblehillschool.org.

When I tell someone outside of Teacher World that I teach math to English Language Learners I continuously hear the same two responses. The first is “You must speak Spanish ” Well the truth is, I don’t. Not even after six years of taking it in school, and teaching math to ELL’s for ten years. Even if I did, it wouldn’t help me too much because I have students from Ghana, Yemen, Albania and Bangladesh in the room. The second is  “Well isn’t math just numbers, the universal language?” I wish this was true. But numbers in Arabic look different, many countries use a comma as a decimal separator, and most math problems these days are contextual. Word problems full of non content specific vocabulary words. What’s an ELL math teacher to do?

Put yourself in their shoes. To keep me humble I will have students explain a math problem to the class and in their native language. Woah, to hear the slope formula explained in French is a real eye opener. Their brains are overloaded all day with all the new content and learning the language. Give them more time to think and formulate an answer.

Data shows that ELL talk much less in class than their non ELL peers. I break the ice in the beginning of the year by reading a math problem that I put into Google Translate to one of the languages a student in the class speaks. By the time I am done they are laughing so hard, and teasing me about my pronunciation and accent. It shows them we are all learning a new language together and it’s okay if it doesn’t sound perfect every time we speak.

I create a list of sentence starters that the students can use when answering or posing a question. The sentence starters are posted in the classroom and are written in the students notebooks for reference. Some examples are: I agree with you because…., another strategy that can be used is ……, I can connect this to when we learned about…. Until they have the confidence to speak on their own this is very helpful to them.

When I was in my Masters program in Secondary Math Education, there were no ELL math classes offered. So I had to find my own way. I speak slowly and use more wait time than I would with a native English speaking class. I repeat and paraphrase throughout the lesson. Often having the students paraphrase what I just taught.  But I do not shy away from using the same math vocabulary as I would for native English speakers, I have the students use the vocabulary when answering questions, and they have a vocabulary section in their notebook to reference. I gesture throughout the lesson and reference pictures, graphs, examples whenever possible.

It’s easy to be overwhelmed by the seemingly endless hurdles your students face. But by taking the time to put them at ease in your classroom, you will see great gains in their understanding of the English language and mathematics.

Starting Off The New Year With Even More Excellent Classroom Advice

A Collection Of “The Best…” Lists On Blogs & Blogging