Editor’s Note: I’ve paid-for, and used, regular Brainpop, Brainpop Spanish, and Brainpop, Jr. videos for years in my ELL classes. I had some concerns about the original Brainpop ELL program, but they have made some major revisions since that time.

Getting a subscription so you can show the movies in class is doable for many individual teachers. However, individual student accounts are only available if you get a full-school subscription. As part of our upcoming Long-Term ELL pilot class, we made arrangements to have those individual student accounts, and tried out the Brainpop ELL program during  our summer school Newcomers class. It was taught by Kelsie Burnell, who had been my student teacher (and a phenomenal one at that), who was assisted by several peer tutors (see Guest Post: Peer Tutors Write About Their Summer School Experience Helping ELL Newcomers).

Kelsie is now getting ready to begin her first year of teaching, but was kind enough to write this article about her experience with Brainpop ELL.  As you can see, as I mentioned earlier, it is dramatically improved from its initial version.

Working with the ELD population at Luther Burbank in south Sacramento this last summer was an incredibly rewarding experience.  Students were in the classroom four days a week from 8-3, for a total of five weeks. In order to break the day up, we utilized the school library and were extremely fortunate to have had the online BrainPop ELL resources presented to our class.  Each day, students would come to the library for one hour and practice on various English learning programs. Of the 30+ students in the classroom, the three native languages spoken were Spanish, Farsi, and Thai. All the students were very engaged with BrainPop and used it more frequently than any of the other language learning programs the school has access to.  Since there were a total of six sections, and five videos in each section, students had plenty to do and a variety of video selections to choose from in BrainPop ELL.

The reason that BrainPop was so successful for students was because they were able to work at their own pace and I was able to monitor student work each day.  Students took a placement test when they first created their accounts, and from there were placed into the proper section based on their score. Students were able to complete a vast amount of activities within each section, testing their knowledge throughout. My students particularly enjoyed watching the movies and taking the graded quizzes.  Another awesome feature they enjoyed was the “Hear it, Say it” feature, which allows students to hear a word or phrase, and then repeat it back into the microphone, where it is then played in their headphones to hear. I personally pushed my students to use the “write it” function, which has students write their own sentences based on a prompt. The higher the level the student was, the more rigorous the writing became. 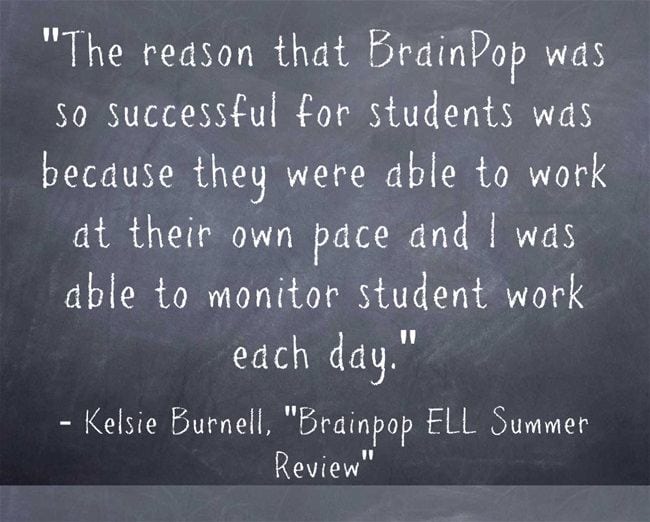 The reason BrainPop was a success in my book, as the teacher, is because I could see the measurable growth in students’ reading, writing, and listening skills at the end of the five weeks.  Students were able to practice verb tenses, something all EL’s struggle with because English is such a crazy language to learn! Students were also engaged in what they were learning and felt empowered when seeing their scores immediately after taking their quizzes.  My only critique for BrainPop is that they do not have BrainPop Jr. as part of the programs that allow you to “assign” work to your students. Students are able to do the assignments that they choose and submit them to you, but you do not have the ability to assign them, as you would with regular BrainPop.  I have no doubt they are working to change this very soon. There were so many options for videos and assignments students could choose from, there was no end to what they could do in those five weeks. For the higher proficient students, they were able to move onto BrainPop Jr. and submit assignments to me there, allowing me to track their progress and understanding of the content.  One final amazing aspect of this program, which really pushes me to the five star rating, is that if students forget their password or username, I can look up their username and reset their password for them under my teacher admin dashboard. This simple addition made life so much easier for my students and myself!

What Books Will You Be Reading This Summer?