New “Opportunity Atlas” Provides Interesting Details, But I Don’t Think It Tells Us Anything We Don’t Already Know 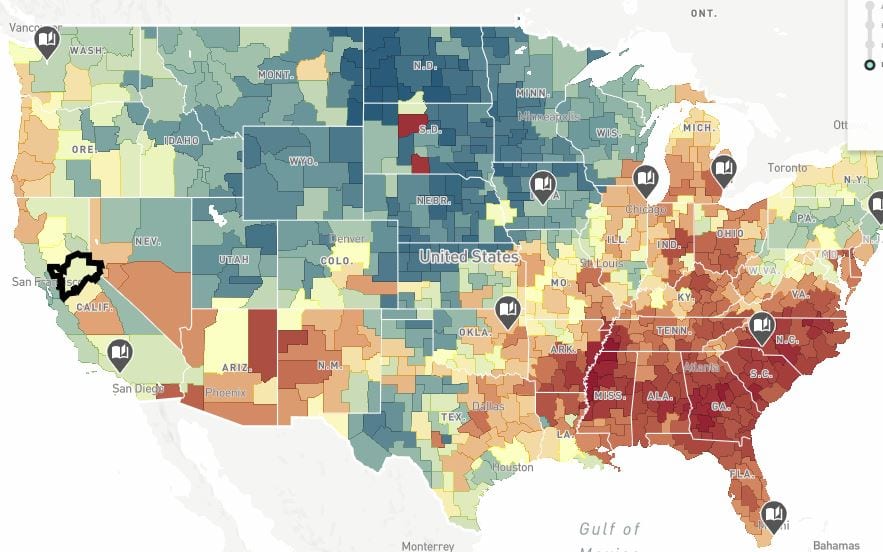 The media has gone gaga today about the new Opportunity Atlas, created by Harvard researcher Raj Chetty and the U.S. Census. It provides very detailed views of individual census tracts, and shows where young people have the best, and worst chances, of escaping poverty.

Here are some of the most useful media pieces on the project:

Detailed New National Maps Show How Neighborhoods Shape Children for Life is from The NY Times.

The American Dream Is Harder To Find In Some Neighborhoods is from NPR.

In reviewing the atlas and the articles about it, I don’t think anyone is going to be very surprised by what it tells us.

And, though, it might prompt some action in a few places (the NPR piece shares what’s happening in Charlotte, which I suspect will be the exception, rather than the rule), there’s no reason to believe more work to fight poverty will result from it (and I’m speaking from the experience of my nineteen year community organizing career here).

A lot of the media seems to believe that information or knowledge is power when, in truth, only “power is power” – it’s only if you choose to do something with that information or knowledge that makes it powerful (see A Look Back: Knowledge Isn’t Power — “Power is Power” and Quote Of The Day: “Knowledge Isn’t Power”). A zillion research studies have shown what causes poverty and what will effectively fight it – another one isn’t likely to make much of a difference.

I’ve posted a lot about Raj Chetty’s work, and have often commented positively about them. However, I will never forget his first major research, which attacked the work of teachers.

I’m certainly open to hearing that I’m wrong with the perspective shared on this post, though, so please comment away.

This Atlas may be useful in my lesson where we compare neighborhoods (A Lesson Highlighting Community Assets — Not Deficits).

And, I’m adding it to The Best Tools For Analyzing Census Data and to The Best Visualizations Of Poverty In The U.S. & Around The World.

Boy, There Are Sure A Lot Of Numbers To Mull Over In This NY Times Column…

Special Edition Of Research Studies Of The Week

Study Finds That Nurture Equals Nature In The United States