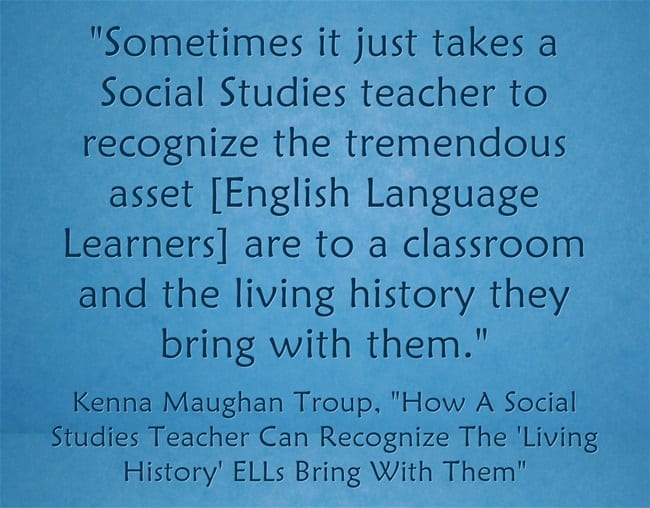 Over the past few months, I’ve published several series of guest posts from teachers of English Language Learners: one on teaching math, another on ELLs and Special Needs, and the most recent one on teaching Science to ELLs. I also published a mini-series on evaluating foreign transcripts.

The first post in this series was by Kayla VanLeuvan:  GUEST POST: TEACHING SOCIAL STUDIES TO ELLS

Kenna Maughan Toup is currently an EAL teacher part-time (two days a week) with the local Scottish Council and four days a week for a local private school (Being a boarding school we have school on Saturdays).  She is also an Educational Doctorate student at the University of Strathclyde (Glasgow)—with her courses based in the “Supporting Bilingual Learners in the Mainstream Classroom” Program. There 1300 EAL pupils in her rural Scottish “county,” with about 300 being actively monitored or directly taught by our team of two, travelling teachers and three bilingual Community Link Workers, spread across 2000 square miles. The main languages of their EAL pupils are Polish, Romanian, Bulgarian and Hindi/other Indian languages. The Private school (population 520) has an EAL population of around 20% with the majority of pupils coming Hong Kong, Mainland China, Russia, Spain, Germany and Mexico.

In 1984 Richard Ruiz wrote the seminal paper on language identity where outlined policy orientations seeing language as a problem, a right or a resource. These same three viewpoints can be taken in considering how to teach social studies to EAL [English as an Additional Language] pupils.

Too often teachers assume Social Studies is too writing intensive or its vocabulary too complicated for ELLs to grasp. On the contrary, use of visuals, maps and first language resources can help ELL pupils understand the lesson and at times provide tremendous insights to the class.  Through highlighting their migration stories, the factors that brought them into your classroom, their families experiences and their world views, a teacher can not only help ELL students feel welcome through listening to their “voice,” and being valued in a school, but also teach native English speakers that Social Studies is not actually about dates, definitions and textbook diagrams. No one is a better living ambassador of the study of people than pupils who have different past experiences from your general classroom population.

EAL pupils have the right to participate in age-appropriate curriculum and learn with their peers so any scaffolding which makes the curriculum more accessible to them is fulfilling the school’s legal responsibilities (a living lesson in social contracts, civics and “equal protection under the law.)” Social Studies teachers more than perhaps any other field of teachers, should recognize their opportunities to educate those for whom English is not their home language. It is one thing to teach a seventy-year old Civil Rights lesson on “separate but equal” but to have pupils in class, who some claim should be in a separate unit until they can communicate, or are not entitled to school due to their parents immigration status presents a microcosm for teachers to model compassion and human decency.

A fantastic way to include students of any age and English stage in a Social Studies classroom is to make an early assignment the “Google Maps” Project. Originally used by a teacher in Glasgow who was trying to help her Chinese pupil share her previous school accomplishments, I have altered it to be more about geography and location, but it has never failed to engage students.  It has always had an equally dramatic impact on the entire class as the ELL is allowed to present it to the class, read their slides and answer questions from others.

In this project pupils (over the age of 8, so they know their previous address) are asked to go onto Google Maps and use street view to find their old home/village or neighborhood. (From previous experience, it does not work in China and parts of Brazil—so check their country first before assigning it). Students are shown how to use PowerPoint and then work with a peer, an aide or a teacher to cut and paste (using “Print Screen”) these street view shots of their “other life” and write sentences to describe where they lived, who they lived with and things about their previous life. Sentences can be as simple or complicated as a student is able, but it puts the ELL as the center of knowledge and is a great motivator for them to speak.

After a cover slide (where they often display their flag), Slide Two is a picture of their old residence (or village if they would prefer as some do not want to show their old house to their new peers– even with Syrian Refugees we used Google Images of now destroyed cities for them to talk about).

Slide Three are their sentences that describe their house/village.

Slide Seven is their describing sentences. Slide Eight is a picture of the current school and Slide Nine is their sentences. If their English allows, Slide Ten is a comparison (We use weather, food, holidays, etc).. and Slide Eleven is “The End” in their home language.

Just as nations believe that their citizens should have an understanding of its history and culture and require a citizenship test to test these facts, schools too are teaching common geographic culture and one way to help EAL pupils integrate is to share history, civics and understanding regarding how the community functions. Although some of the concepts are more difficult than “New to English/”Beginner vocabulary can explain, often times the pushing or pulling factors which brought new arrivals to your classroom are an ideal “living example” of Social Studies. From Syrian refugees, to economic migrant Latvians who came for the soft-fruit industry, to Polish families working in the hospitality sector or Roma’s fleeing discrimination in Slovakia, these children are real-life examples of voting patterns, racial segregation, economic policy failure (or successes), historical warfare fallout and lobbying efforts. Sometimes it just takes a Social Studies teacher to recognize the tremendous asset they are to a classroom and the living history they bring with them.

Google Chromecast Has Arrived & Here’s What I Think Of It

“Seriously Amazing” Questions Get Answered At The Smithsonian