Would You Pass “The Anne Frank Test”? 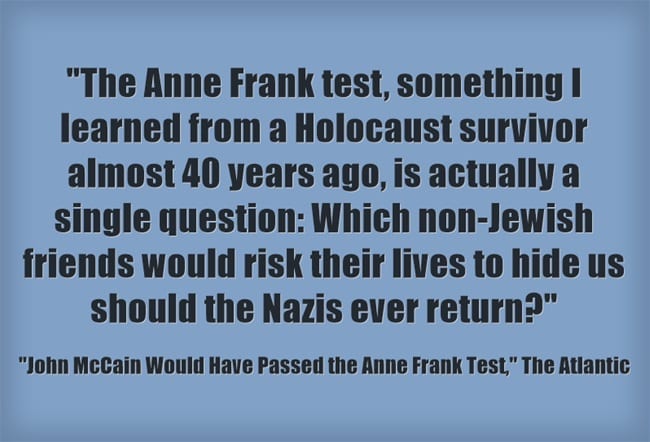 John McCain Would Have Passed the Anne Frank Test is an article from August that I’m just getting around to writing about.

The most important piece in it is the passage I highlighted at the top of the post.

It seems to me that it would be worthwhile discussing it both in Theory of Knowledge class when covering ethics and, of course, in History class.

It reminds of of some of the most amazing class discussions I’ve ever had – over ten years ago when we were learning about the California Missions in my ELL U.S. History class.  I asked students what they think they would have done if they had been Native Americans forced to stay in the Missions – fought back violently, run away, stay there, or done something else.

All the non-Hmong refugee students at the time said they would fight back violently.  Then, some Hmong students said they would run away, and talked about their experiences of resistance in Southeast Asia and how their families had decided to run-away through the jungle.

You could hear a pin drop after they were done describing what had happened to family members who had chosen to resist against overwhelming odds.

Then, most of the other students changed their mind and said they would run away instead of fighting.

These kinds of conversations happened each year for a few years…

I’m adding it to The Best Sites To Learn About Anne Frank.

The Best Sites For Learning About Easter And Passover