Editor’s Note: I’ve invited Pedro De Bruyckere to write this guest post on differentiation. You might also be interested in all my “Best” lists related to differentiated instruction.

Pedro De Bruyckere holds a position as educational scientist at Arteveldehogeschool in Ghent, Belgium and at Leiden University, The Netherlands. He co-wrote the popular book “Urban Myths about Learning and Education” with Paul Kirschner and Casper Hulshof and is an avid blogger on research in education.

One of the biggest possible differences between learners, is their prior knowledge. And this matters a lot as prior knowledge can have a huge influence on what pupils learn.

Let me explain this with an often used example: chess. If you don’t know a lot about the game you won’t be able to understand a lot of the following chess board situation and it will be difficult to read the explanation you read in the post about this game: 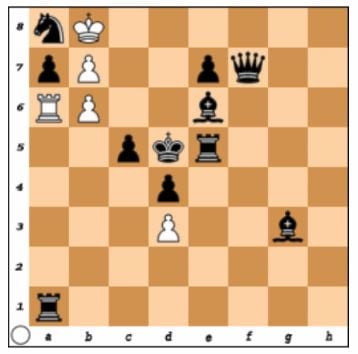 This will be much different if you are an experienced chess player. Than there is a big chance you will enjoy what you see and probably learn a thing or two from what you read.But how can we differentiate based on prior knowledge?

For my book The Ingredients for Great Teaching I tried to figure out one of the most simple forms of differentiation, one we have been using in our teaching training department for some time now. Try this in a lesson in which you experienced before that the differences in prior knowledge between your pupils or students are huge.

First step: what prior knowledge to your learners need to understand what will be taught. I don’t mean what will be discussed in class, but what they need to have learned before. This excerpt from my book now continues:

After you have decided what prior knowledge your pupils need, choose five core words that they should already know if they possess this knowledge. The pupils who can describe four or five of the core words with relative ease can immediately be allowed to explore the subject of the lesson by themselves. For pupils who know three core words (or perhaps even four, but still don’t really feel confident), you should provide a short text that refreshes their memory of the themes involved (this text is some-times referred to as an advanced organizer). The pupils who know just one or two (or even none) of the words need to be taken aside and given direct instruction by the teacher, so that they can then work independently later on in the lesson, once they have gained the necessary prior knowledge.

Is it a miracle solution? Of course not, there aren’t that many in education, but it sure can help so give it a try. Oh, btw, in my experience this works best if you work together as a team when discussing what prior knowledge is needed

Sometimes You Just Have To Take The Risk, Jump In, & Grab An Opportunity Because It May Not Be There For Long…