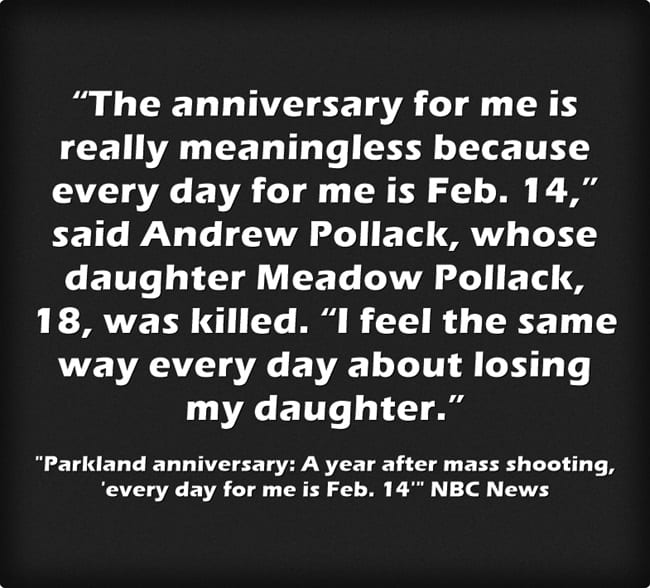 This week is the one-year anniversary of the Parkland shootings.

You might also be interested in a series of Best lists on gun violence, which you can find here.

Here are some resources specifically on the anniversary, and I’ll continue to add to this list:

Parkland anniversary: A year after mass shooting, ‘every day for me is Feb. 14’ is from NBC News.

To Honor Parkland Victims, David Best Is Building A Temple, Then Setting It On Fire is from NPR.

‘Parkland changed everything’: As anniversary approaches, new book examines the school shooting and the students who turned their sorrow into a movement is from The Chicago Tribune.

“Now You Have A Seven-Hour Rehearsal Where You Have To Sing And Cry”: After Parkland Students Survived The Shooting, Their Show Had To Go On. is from BuzzFeed.

A school shooting a year ago in Parkland, Fla., kicked off a year of debate over a whole span of issues related to school safety and guns. And it forever changed the lives of those most personally affected. Hear it in their own words. https://t.co/aTNqbDrMSq pic.twitter.com/yYY0hDjQhk

A group of teenage reporters have written obituaries for every child who died since Parkland due to gun violence.

You can read them here:https://t.co/xbpM1PrqCY

As the anniversary of #Parkland approaches, we talk to young people who are generally left out of our guns convo: young black and brown kids who experience violence in their neighborhoods sometimes every day. https://t.co/fjWrBaiMND

Parkland: A Year After the School Shooting That Was Supposed to Change Everything is from The NY Times.

Parkland Student Survivors Brace For 1st Anniversary Of School Shooting is from NPR.

For the project “Since Parkland,” teenage journalists wrote profiles for every child killed by gun violence in the year since the school shooting in Parkland, Florida https://t.co/k8F7pZ994j

At @sunsentinel, Tony Montalto — whose daughter Gina was killed in the Parkland shooting — reflects on loss. https://t.co/NOBhEXKvii

Gun control. Red flag laws. Arming teachers. Here’s how America has responded to the Parkland massacre over the past year. https://t.co/GfowtiwgtI

Black students at the Parkland school felt ignored in the aftermath of last year’s school shooting. But they have something important to say. pic.twitter.com/tdIAD0gtjm

"My life is not normal. It will never be like before."

Anthony Borges, 16, suffered 5 bullet wounds as he barricaded a classroom door to protect other students. His wounds have healed but his recovery is far from over. https://t.co/8QiCquQCiY pic.twitter.com/QRFQMQeV00

"Most victims were minorities in communities awash in firearms." https://t.co/KOir9a5FxJ pic.twitter.com/S3E7CIZvd2

On the anniversary of Parkland, a psychiatrist writes about her newfound hope about the possibilities of preventing school shootings. https://t.co/5hkSAUwaVm

Teens across the U.S. shared their voices with Extra following the #Parkland tragedy. Their responses poured in and then poured in some more. #MSDStrong https://t.co/R8fbJ2Tir8

The Best Thirty-Five Web 2.0 Applications For Education In 2019