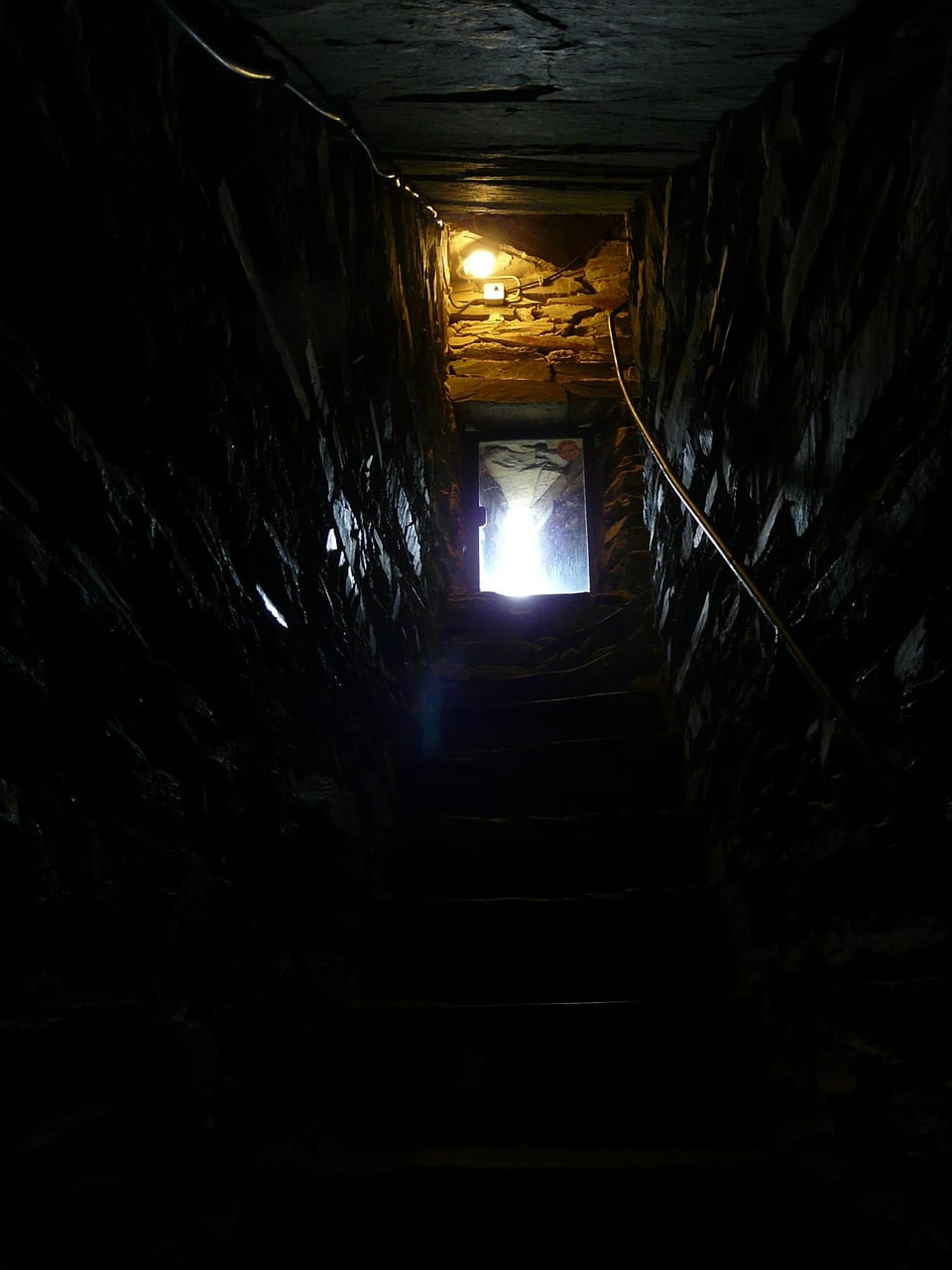 Editor’s Note: Phil Taylor is a colleague at Luther Burbank High School, and has written several previous guest posts on classroom management and restorative practices. I’m adding this post to The Best Resources For Learning About Restorative Practices – Help Me Find More.

Phillip Taylor is an educator of over 20 years experience who has performed research investigating the efficacy of restorative practices.  He currently runs a restorative discipline office at his school site for two periods of the school day.

Research into teacher/student relationships in connection to classroom management has shown how important positive relationships with authority figures can be in connection to school discipline (Clayton, Cook, Coco, Zhang, Aria, Fiat, Doung, Renshaw, Long, & Frank, 2018).  We know that developing positive relationships can and does elicit better classroom behavior.  If we are going to get serious about turning our most troubled kids around, then we need to apply approaches research has shown are effective, rather than more “traditional” approaches, which propose we give kids escalating consequences until they “step in line.”

In fact, research has not only shown that relationships are the key to improving classroom behavior, but that simply providing consequences for non-compliance and escalating those consequences can lead to what have been termed the School-to-Prison Pipeline (Fabelo, Thompson, Plotkin, Carmichael, Marchbanks, & Booth., 2011; Fowler, Lightsey, Monger, Terrazas, & White, 2007; Fowler, 2011).  Despite our knowledge on this subject, in the face of frustration over consistent misbehavior, teachers and administrators can still fall to what I have termed the “Dungeon Theory” of school discipline.  “Dungeon Theory” manifests in a variety of ways.  For example:

“They shouldn’t enjoy detention, they should be uncomfortable when they’re in there.”

“They WANT to go to detention. We should make detention someplace they don’t want to be.”

“They LIKE the vice-principal in charge of discipline!  That isn’t right, they should be afraid of him and hate him!”

“He isn’t responding to detentions!  He doesn’t even care about them!  We should make him do something he hates so he gets the point!” 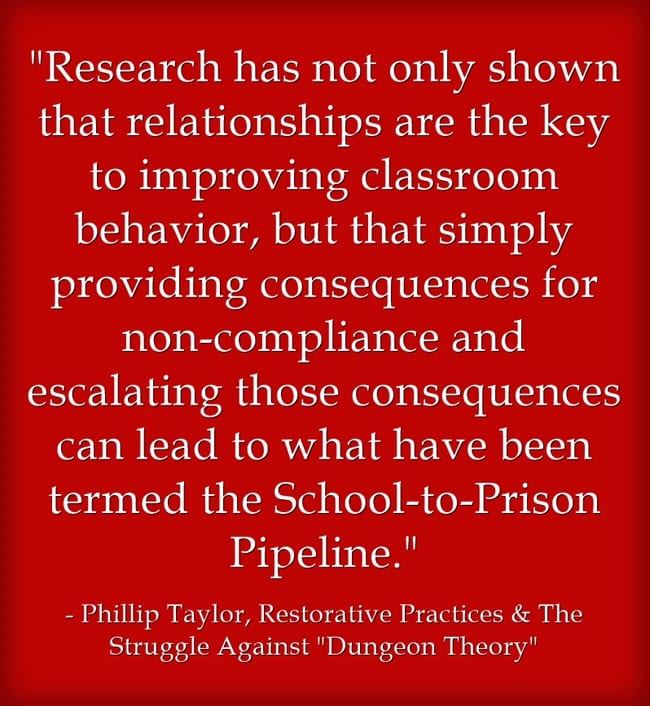 The focus on pain in such frustrated exclamations have caused me to adopt the term, “Dungeon.”  Often, educators fall to the belief that consequence = pain.  Thus, detention must “hurt” in order to get students to change their behavior.  While research has shown that “reintegrative shaming” may have some ability to help shift student behavior, pain, more generally, does not shift student behavior (Braithwaite, 1989).  Such an error in our thinking is actually the opposite of what we know works.  Certainly, students shouldn’t be watching their favorite television shows during a consequence, or shooting dice, but we should be helping students to cultivate positive relationships with authority figures and positive peers, since we know such relationships are the key to positive changes and adopting our values about how students should conduct themselves (Clayton, Cook, Coco, Zhang, Aria, Fiat, Doung, Renshaw, Long, & Frank, 2018; Taylor, 2018). Other examples of such errors in thinking I frequently hear are:

“They should be made to pick up trash or something they hate to do, and if they refuse, give them another detention until they do…”

“They should do an essay about how their behavior is bad and if they refuse, they should get another detention until they write the essay…”

Many times, teachers believe that such efforts are ‘restorative’ because we’re trying to make students write an essay about their misbehavior, or pick up trash, or something “reflective,” or positive for the community to “get through” to them.  Unfortunately, when we frame any such activity as a “do it or else” proposition, we have left the ‘restorative’ world and entered the punitive world.  Perhaps such efforts as picking up trash or writing an essay will work as an alternative to a detention, but when we frame these efforts as an ultimatum, we are essentially saying, “grow up NOW, OR ELSE!!!”   Such approaches are more likely to cause an already willful student to become more entrenched in an opposing position, rather than soften up and hear what we are trying to tell him about the self-destructive nature of his actions.  When caught up in such frustrating scenarios with students, we are forgetting that many of the students we are working with have no support at home, and nothing in their lives to prevent consequences from progressing to the point of expulsion.  This is one of the reasons why no tolerance policies led to the school-to-prison pipeline in the first place.

Thus, in the midst of our frustration, it is important to set aside “Dungeon Theory” in favor of theories and approaches that have been shown to actually work.  What can be frustrating about the approaches we know to work, oftentimes, is that such approaches sometimes work slowly.  For many students, our efforts are long-term.  “Dungeon Theory” is seductive in that many educators believe in the moment of frustration that it will work faster.  It demands immediate change “or else.”  Unfortunately, the “or else” proposition is what leads to the chain of escalating consequences that ends in suspensions and expulsions for minor offenses:  The School-to-Prison Pipeline.

This is not to say that consequences such as detentions and other traditional approaches to school discipline are inherently problematic.  Some research has suggested that such consequences framed within the context of a positive relationship and/or explained in a reasonable tone are perceived by students to be restorative and effective at convincing students to adopt the ethos we are trying to teach them (Taylor, 2018).  This research goes on to suggest that even restorative approaches to school discipline can feel punitive to students if there is a toxic relationship with the teacher and/or authority figure.  Thus, our efforts to “get through” to a student must be founded on the effort to foster a positive relationship, rather than on a chain of escalating consequences. 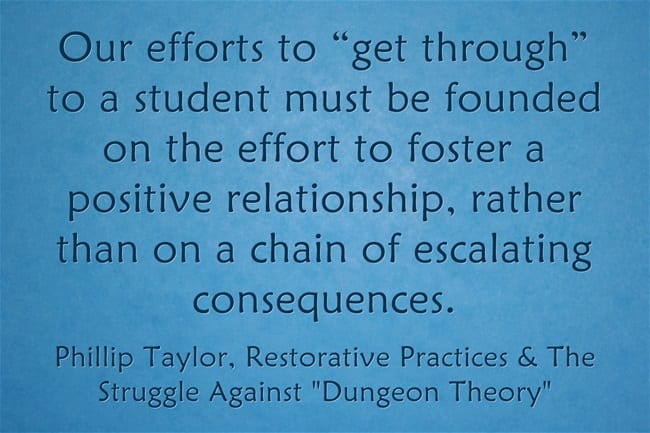 In essence, we can give consequences such as detentions, we can attempt to reach out and build a positive relationship with students, but such efforts also implicitly mean that we are leaving room for a student to reject our efforts.  Restorative methods of school discipline may work better, but they aren’t magic. Part of what makes restorative discipline efforts more effective is that they leave room for the student to be who they are and make choices, even wrong choices.  The effort to remain calm in the midst of providing reasonable consequences and efforts at relationship building can be a Herculean effort in the face of repeated misbehavior.  Such dynamics can become so repetitive that it is understandable for us to get frustrated and seek to try something new to put a stop to the dynamic.  But in the midst of such creative explorations, we must be mindful and watchful of “Dungeon Theory,” and continue to cleave to methods we know work.

Thus, our efforts to “get through” to a student must be founded on the effort to foster a positive relationship, rather than on a chain of escalating consequences.

Part of what makes restorative discipline efforts more effective is that they leave room for the student to be who they are and make choices, even wrong choices.

The effort to remain calm in the midst of providing reasonable consequences and efforts at relationship building can be a Herculean effort in the face of repeated misbehavior.

Quote Of The Day: “Asking Advice Makes a Good Impression” & Its Connection To The Classroom

It Appears That GoEnglish.me May Rise Again — In Some Form