New – To Me, At Least – Research On Intrinsic Motivation 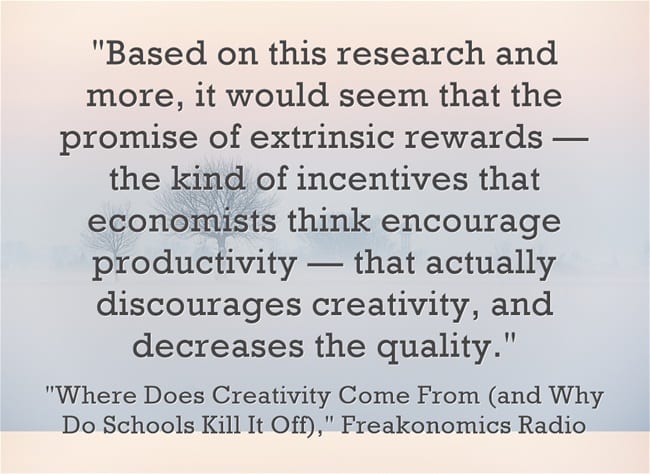 As the author of several books on how to nurture intrinsic motivation in our students, and as a sharer of many related resources (see Best Posts On “Motivating” Students), I’m pretty familiar with research on the topic.

One early and well known experiment found that children who were promised a reward were less interested in creating art than those who did not get that promise (it’s cited in just about every motivation study you can find).

In this Freakonomics episode from last October, though, Teresa Amabile talks about a variation on this experiment that she organized.  In it, students were told their artistic creations were going to be judged, and those children’s creations turned out to be much less creative than those from the control group.

She goes on to say:

I think that the biggest mistake we make in our schools, and I’m talking about everything from kindergarten now up through college, is to focus kids too much on how the work is going to be evaluated. Part of that is the extreme focus on testing in the United States right now and the past several years….

There’s too much focus on “what is the right answer, what are people going to think of what I’m about to say?” and too little focus on “what am I learning, what cool stuff do I know now that I didn’t know last week or a year ago, what cool things can I do now that I couldn’t do before?” And I think that if we could if we could switch that focus, we would do a lot to open up kids’ creativity.

In other words,  teacher judgment itself, especially, I assume, if it’s handled poorly, has the potential of being as damaging to student creativity as any other kind of more explicit reward.

Another Depressing Statistic On Wealth Inequality