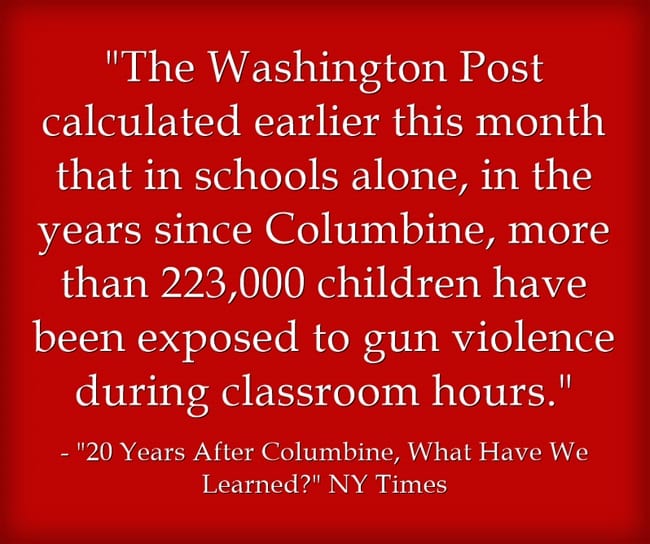 The 20th anniversary of the Columbine shooting is coming up, and there will certainly be more articles and videos on the topic (which I will add to this list).

I have many other “Best” lists related to gun violence, which you can find here.

20 Years After Columbine, What Have We Learned? is from The NY Times.

The number of copycat shooters inspired by Columbine has surged, our investigation shows https://t.co/8izRbgMy0e

Breaking News: Hundreds of Denver schools are closed as the police search for an 18-year-old woman who made threats ahead of the 20th anniversary of Columbine https://t.co/86KZm3v2t0

‘I’ve Had a Lot of Survivor’s Guilt’: Columbine High’s Former Principal on Healing His Community is from Ed Week.

Saturday marks the 20th anniversary of Columbine, the largest mass shooting a high school had ever seen. Hear two survivors open up about that day, and what it took for them to move on, this Friday on @MorningEdition. pic.twitter.com/Icxud2Fo00

After Columbine, An Unlikely Friendship Bound By The Trauma Of Mass Shootings is from NPR.

20 Years After The Columbine Shooting, Students And Staff Reflect On What Happened is from NPR.

"Twenty years ago, at Columbine High School in Colorado, two student shooters killed 13 people and themselves — a mass shooting so shocking that it would have been hard to imagine it would ever begin to seem routine." — Vox's @germanrlopez https://t.co/OCdVjdex4d

"Columbine offers hope," says former Columbine principal Frank DeAngelis. "That's what I hope, 20 years later, that we're doing, that we're reaching out to other people — the Parklands, the Santa Fes, the Sandy Hooks."

Since Columbine, Fears of School Violence Have Grown. Research Shows That Schools Are Safer. https://t.co/clsixtA6A1

With the 20th anniversary of the Columbine shooting looming, several grieving parents and survivors sat down with @NBCNightlyNews to talk about what has changed and what, sadly, has not. https://t.co/921sUBxxC2 (1/4)

He Was a New Teacher at Columbine During the Shooting 20 Years Ago. Here’s Why He Never Left. is from TIME.