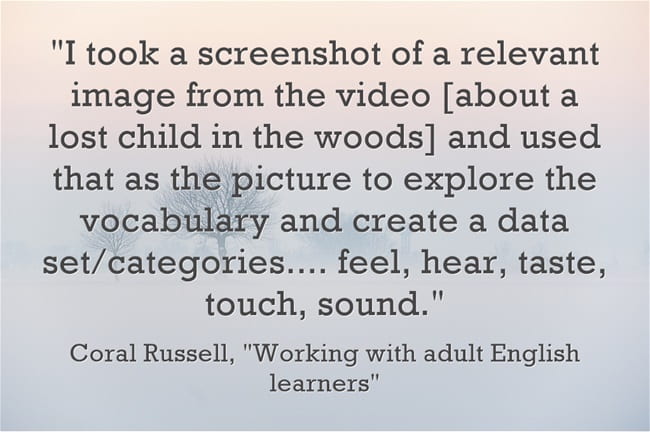 Editor’s Note: I recently invited readers to contribute short posts about their experiences teaching adult English Language Learners. Many have responded – and there’s room for more!

The second one was by Leighton Suen.

Coral Russell has a Master’s in TESOL and has been teaching ELLs in the US, Korea, China, and Venezuela for thirteen years. Currently she is the ESOL Coordinator and Instructor with the EGCC Aspire ESOL program in Ohio.

I have been a follower of Mr. Ferlazzo’s blog since I taught in the public school system in Missouri as an ESOL teacher and co-chair of the ESOL department. His resources were invaluable for a first year ESOL teacher. Fast forward thirteen years and I am happy to have gotten both his books ESL/ELL Teacher’s Survival Guide and the ELL Teacher’s Toolbox. I am now ESOL Coordinator for the EGCC Aspire ESOL program in Ohio. Aspire provides adult education for students trying to complete their High School Equivalency test, pass a job performance basic skills test and those who want to learn or improve their English language skills.

After reading through the books, looking at the handouts and taking notes I picked out several activities I wanted to try that I had not done before in the classroom. Although I knew the different strategies I felt I hadn’t fleshed them out as completely as what was presented in the books.

I teach Level 1-2 so I searched YouTube for a short video. I took a screenshot of a relevant image from the video and used that as the picture to explore the vocabulary and create a data set/categories. I also added these categories and asked for student input – feel, hear, taste, touch, sound. We used Google translate. I was surprised that the students could come up with a lot of words on their own and they were interested in the mood of the picture. I found out later why some students reacted positively and loved the idea of being in the woods as a child and others found it scary. The title of the video was Lost Child and sure enough some of them had gotten lost in the woods at a young age.

The students were engaged with the activity and discussed what they thought the picture was about and what it might mean in the video. We then wrote simple present tense sentences using the vocabulary words. Some could write more independently than others. After getting permission first, I edited the sentences in Google Docs using a projector/Smartboard. I used the suggested edits tool so they could see the changes as I made them. Then they wrote their corrected sentences again and practiced reading. Some students chose to read their sentences to the class. Those that did not just read it with me.

All of this was done over several classes since we meet three times a week. The final activity was to watch the video. I really wanted to try the Back to the Screen approach and after we did some more vocabulary review and games I thought they might be ready to try it. I paired the students up because I wanted a stronger student who seemed to know the vocabulary better with a student who was still learning the vocabulary. This worked out fairly well although there was still a lot of helping between teams and as a class. Since my students are adults I tried to get away with a video that had a mild jump-scare at the very end. This left the students with their backs to the video wondering what had happened and the students who’d seen the video trying their best to explain. After that we all watched the video together.

The next challenge is we have new textbooks/workbooks/ESOL Standards/placement test to put into effect for the upcoming year. The strategies from the books will come in handy when trying to pull all of this together.

There are challenges in working with adults. They choose to come to class when they want/need to or when they can work it in around other commitments to family and their job. This means a lot of missed classes or simply having to stop or put their studies on hold before they can really get started. I don’t have any easy answers. For the upcoming year we are working on having more of a blended class. All of the lessons will be available online so even if a student misses a class they will be able to access something that they can study so when they do come back they will not have missed anything.

At the lower levels when newer students come in every couple of weeks it can feel as if you’re always reviewing and never moving forward. We are going to use a bilingual tutor (the majority of our students speak Spanish) to help keep the classes moving forward. We are also putting together a list of resources for students to use as part of an ESOL Distance Education class. They will be able to use a smartphone or their computer to complete lessons and check in with a teacher every week.

Community involvement, networking and building a bridge between our classes and students and their families will be another focus for the upcoming year. Because of my background I will stay involved with the Spanish and Korean speaking community and will ask my teachers to pick another community in order to develop relationships with students and community leaders.

There are several more things I’m planning to try and implement over the coming years and would love suggestions from other adult teachers about what is working in their program. I happy to say that we’ve had positive support from local churches, public schools, and agencies like Headstart.

One new step Ohio Aspire is going to implement is using the TABE CLAS-E placement test. We asked to be early adopters of this test. So far it has worked out well. If a teacher/staff is familiar with public school standard tests or the TABE tests then this has nothing new. What is new for us at least is that this test covers all domains: listening, speaking, reading, and writing. One positive aspect I’ve found is that students can’t hide their English. A lot of students play down how much they know because they want to start at the beginning or Level 1. When we used other tests that only tested one domain or another it wasn’t easy to tell right away. With the TABE CLAS-E they can’t hide it as easily, the urge to do well is too strong. The test is also detailed enough that we can review the results with the student and show them exactly what skills they are weak in (according to this test). It has also pointed out gaps in our teaching, for example, we found out students were having a difficult time with dialogues and giving directions/sequencing events.

Of course no placement test is perfect and it is slightly outdated. Ohio is waiting on NRS approval but based on the testing we’ve done so far I think it has been very accurate placing students. It also allows for some tie-in to the TABE 9/10 test which is an academic/basic skills placement test Level M. We’re planning on using this with students that test beyond TABE CLAS-E but they can still find academic areas in English to study or give them the confidence they need to pursue their goals. I had one student who completed one year of college in Puerto Rico but because of the hurricane she had to relocate to the US. She was unsure she had enough English to start studying here. I knew she was a high level student and after giving her the TABE CLAS-E test I was able to show her that she was a high level student, in fact the highest, Level 6. I’m happy to say we’re now working toward getting her re-enrolled in college.

Guest Post: “The Welcome Back to School Letter I Wish I had Received”