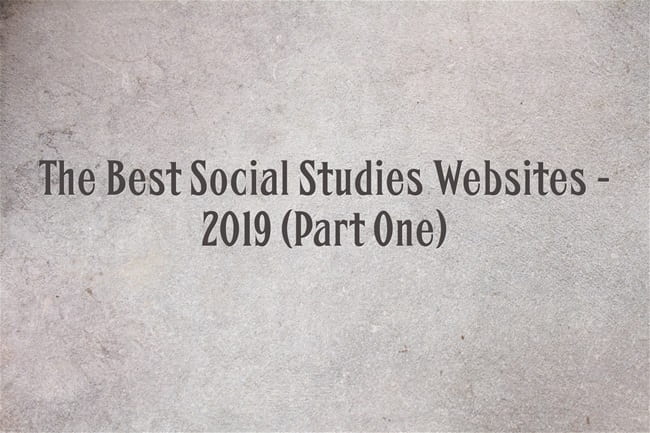 You can see all my previous Social Studies “Best” lists (and there are a lot since I’ve doing this since 2007) here. Note that they’re also continually revised and updated.

THE DANGERS – & POSITIVE POSSIBILITIES – OF HISTORY SIMULATIONS is a post about an important topic.

This is a pretty cool video:

Write Our Stories is a huge collection of stories from NBC News related to Asian American and Pacific Islander Heritage Month. And the stories are substantial, not fluff.

Thanks to an article in The New York Times (Splat! Bam! It’s the Federal Reserve to the Rescue), I learned that the Federal Reserve Bank publishes comic books, along with lesson plans for how to use them in middle and high school, about economics. They look pretty accessible to me.

Schools keep teaching slavery and civil rights history in ways that traumatize black students is from Vox. I’m adding it to New & Revised: Resources To Help Us Predominantly White Teachers To Reflect On How Race Influences Our Work.

You’ve never seen the “rise and fall” of colonial empires visualized in this way before:

“The decline of the largest maritime empires of the 19th and 20th centuries using a ludic and organic metaphor that incorporates mitosis-like spilts.”

A BEGINNING LIST OF THE BEST RESOURCES FOR TEACHING ABOUT REPARATIONS

I’m adding this new video to The Best Websites For Teaching & Learning About World History:

Thanks to Rebecca Marsick, Maggie B. Roberts and @ShawnaCoppola,  I learned about Thinkalong. It’s a free project of Connecticut Public Radio and Television designed to promote medial literacy and critical thinking, and has all the resources you need for lessons that promote both. Here is how they describe themselves:

Thinkalong is a learning tool designed for middle school students to build critical thinking, media literacy and debate skills. Thinkalong asks students to put social issues under a microscope by evaluating sources, considering multiple sides of an argument, and engaging in respectful dialogue.

Even though it’s designed for middle schools, I can easily use it in high school, too. This is how they explain how it works:

Thinkalong provides a framework for evidence-based discussion with its three-step process, investigate, contemplate, and debate. Students read, watch, and listen to credible news sources, analyze them with a media literacy lens, and debate the question with their peers.

I’m adding it to The Best Resources On Teaching & Learning Critical Thinking In The Classroom,

Racism Scale is a useful, and there’s no other way to put it, scale describing racism. I’m adding it to Revised & Updated: Useful Resources For Learning About Race & Racism.

SlaveVoyages.org just unveiled a revamped website, and it’s amazing – and tragic. Here’s how it describes itself:

This digital memorial raises questions about the largest slave trades in history and offers access to the documentation available to answer them. European colonizers turned to Africa for enslaved laborers to build the cities and extract the resources of the Americas. They forced millions of mostly unnamed Africans across the Atlantic to the Americas, and from one part of the Americas to another. Analyze these slave trades and view interactive maps, timelines, and animations to see the dispersal in action.

I’m adding it to our U.S. History class blog where there are other visualizations of the slave trade.

THE BEST RESPONSES TO “I DON’T SEE COLOR”

Thanks to Melanie Bean, I learned about an impressive interactive timeline of the Holocaust, accompanied by teaching materials. It’s from Echoes and Reflections, an education organization sponsored by the ADL and USC Shoah Foundation, along with others. I’m adding it to The Best Sites For Learning About The Holocaust.

I was reading the San Francisco Chronicle and saw an article headlined ‘Rise Up!’ helps students and teachers find their inner Lin-Manuel Miranda. Apparently, a group of Bay Area educators and artists teamed-up to create a free curriculum inspired by the musical called Rise-Up! An American Curriculum. It looks impressive. I’m adding it to The Best Teaching/Learning Resources On The Musical, “Hamilton”

What If A Girl In The Holocaust Had Instagram (also called Eva Stories) is an amazing Instagram story that dramatizes the actual diary account of Eva Heyman, a teenager who perished in the Holocaust. I learned about it from Julia Jee, and from The New York Times article, A Holocaust Story for the Social Media Generation. What Social Studies teacher will not use it in class? I’m adding it to The Best Sites For Learning About The Holocaust.

The Best Resources For Teaching About Why Blackface Is Racist

Newsmap.com (not to be confused with Newsmap.jp, which is on The Best Visually Engaging News Sites list, is an interactive map linking to local news media in different countries around the world. You can also filter it by language. I’m adding it to The Best Tools To Help Develop Global Media Literacy.

Cultural Jambalaya has a sizable collection of original videos and photographs about the world’s different cultures, along with free accompanying study guides. Their resources look pretty useful. Their videos are on Vimeo, however, and don’t provide closed-captioning. A few of their videos are on YouTube, though, and those do have subtitles. I’m adding it to The Best Sites For Learning About The World’s Different Cultures.

This interactive is called This is a chart about the world through the eyes of the US. They analyzed NY Times headlines from the past 120 years and created an interactive showing which country received the most attention month-by-month. It would be a great tool in a U.S. History class. I’m adding this info to The Best Websites For Teaching & Learning About U.S. History.

Real Country Sizes Shown on Mercator Projection will show you, with a click of a button, the real size of countries compared to what it looks like on a Mercator map. So simple and so powerful. I’m adding it to:

The Best Resources On Different Types Of Map Projections

The Zinn Education Project is a great resource, and has been on The Best Teacher Resource Sites For Social Justice Issues list it began. They just unveiled a redesign and expansion of their website, and it looks great! One of the new features I’m most excited about is a complete and searchable “Today In History” page. It’s a great addition to The Best “Today In History” Sites.

Quartz has created an interactive that lets you find the expected life expectancy for people living in most census tracts in the United States. All you have to do is type in an address to get the result. And the results can be eye-opening. For example, the life expectancy of people in the census tract where I live is six years greater than those living in the neighborhood where I teach. This tool would certainly be thought-provoking to use in the classroom.

GBD Compare is an impressive visualization of the causes of death in every country around the world. You can choose to have the data displayed in different chart forms. I’m adding it to The Best Sites For Learning About The World’s Different Cultures.

The Best Posts On Books: Why They’re Important & How To Help Students Select, Read, Write & Discuss Them

More Resources On The World Cup