Best Videos For Educators In 2019 – Part One 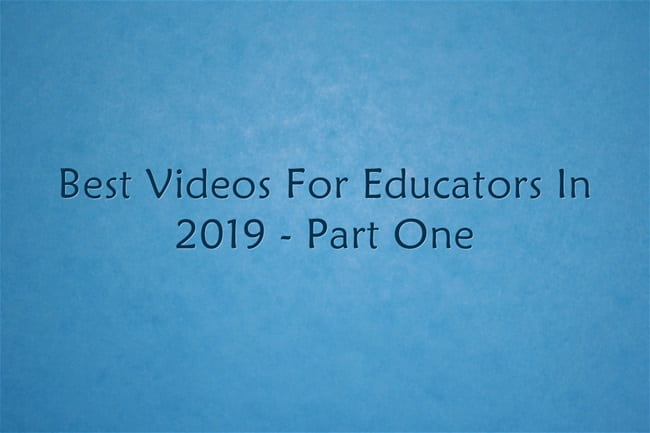 It continues to be time for mid-year “Best” lists.

The second was The Best Social Studies Websites – 2019 (Part One).

“It’s Hard To Delay Gratification. Just Ask Cookie Monster” is a new fun video, accompanied by a useful short article, from NPR. I’m adding it to Best Posts About Helping Students Develop Their Capacity For Self-Control.

Last fall, Katie Hull and I worked with Ed Week to create a very popular animated video introducing differentiated instruction. Then, Ed Week send a videographer to our classrooms to do some filming and create two more: one on differentiating instruction for English Language Learners and the other providing advice for how all teachers can plan ahead to differentiate.

Ed Week published those two new videos under the title How to Differentiate Instruction (Without Losing Your Mind) and at Differentiated Instruction: How to Make Lessons Accessible for All: A Video Series. Each of those links has additional resources, along with the videos. And the three videos are also embedded below.

I’m adding them to:

Best Lists Of The Week: Differentiated Instruction, where I have tons of curated resources on the topic.

I’m also adding them to my video page, where you can find quite a few other useful ones I’ve made or helped create on different topics. Those include an animated on transfer of knowledge, and we’ll be working with Ed Week to create more animated videos.

I’m adding this new video from Newsweek to The Best Sites For Learning About Various “Seven Wonders”:

The video was created by Budget Direct.

March For Our Lives (see The Best Resources For Learning About “The March For Our Lives”), an organization coming out of the Parkland high school shootings, recently unveiled this powerful PSA. I’m adding it to the other resources I’ve shared on gun violence.

I’m adding this new video from San Francisco public television to The Best Resources For Learning About School Dress Codes:

Here’s a fun video to use when demonstrating the importance of good pronunciation. I’m adding it to  I’m adding to The Best Websites For Practicing English Pronunciation:

Over on The Best Resources For Helping Teachers Use Bloom’s Taxonomy In The Classroom list, I have a lot of videos that use scenes from movies and television shows to teach the different questioning levels.  I’m adding this video to that list:

I’m adding this new Newsy video to The Best Resources On How Exercise Helps Learning — Please Contribute Other Resources:

I showed this Nike commercial to my English Language Learner students, including many young women from Afghanistan, and asked them what they saw in the video and what it meant to them:

I’m a big fan of “choose your own adventure” stories – both text and in video. They’re engaging for everyone, including English Language Learners (see The Best Places To Read & Write “Choose Your Own Adventure” Stories). Unfortunately, last year YouTube disabled the annotations tool that people were able to use to create those kinds of videos.  There’s still a way to do it, but it seems more difficult, and all the older videos that were on that list don’t work any longer as CYOA. However, I read on TechCrunch about the video creator Eko, which creates similar videos for their own site and others for BuzzFeed. I don’t think the ones they make on their own would work for class, but their ones for BuzzFeed would work very well for English Language Learners. For example, there’s one on ordering Ramen (when learning about food); another silly one on what kind of dog you might be, and another on reading Tarot cards (which could be dicey if some students find it conflicting with their religious beliefs). I’ll be looking for more as they come out…

This short video on ability-grouping is well-worth watching.

TED-Ed’s has a new lesson is on Frida Kahlo. I’m adding it to The Best Sites To Learn About Diego Rivera & Frida Kahlo:

Lively Data is a new YouTube channel that creates and shares animated infographics comparing the demographics of different countries. I’ve embedded a few examples below. I’m adding this info to The Best Tools For Comparing Demographics Of Different Countries:

TED-Ed has a new lesson and video is on “Harvey Milk’s radical vision of equality.” You might also be interested in The Best Ways To Support LGBTQ Students:

The NY Times published this great video that will be perfect of IB Theory of Knowledge classes (and others). It teaches about confirmation bias and various fallacies, and is done in the style of School House Rock.

Measles is trapped inside a test tube at the C.D.C.! Under the guidance of her wise buddy Polio, she sets out on an adventure to go viral and infect Americans. And lucky for her, there are many parents who subscribe to the logical fallacies that deny science and the success of vaccinations. Can she succeed?

I’ve previously shared interviews done with Angie Thomas, author of The Hate You Give. Here’s one from The Daily Show. Here it is:

Seth Meyers did about “WHITE SAVIOR: THE MOVIE TRAILER” spoof (it’s the second video clip embedded below).Thanks to Venus Evans-Winters, I learned about a more serious examination of the issue that was published by Insider. That clip is titled “How White Savior Movies Hurt Hollywood,” and is the first video embedded below.

Though I haven’t yet used it in class, I’m still adding this post to the “Race and Media” section of New & Revised: The Best Resources I’ve Used In Lessons About Race & Racism.

There are a lot of lessons in this video – for teachers and for everyone else, too:

Here’s a TED-Ed video and lesson on James Baldwin. I’m adding it to James Baldwin Was Born On This Day In 1924 – Here Are Related Resources.

You’ll want to watch this short Oscar-nominated film (and you might want to show it to your students) about a pro-Nazi 1939 rally at Madison Square Garden. A Night At The Garden has a lot of potential for classroom use. You can also read about the lone protester who tried to disrupt it at The Washington Post’s When Nazis rallied in Manhattan, one working-class Jewish man from Brooklyn took them on. Vox’s article is also worth reading: 80 years ago, 20,000 New Yorkers cheered for Nazis at Madison Square Garden

I’m adding this new – and horrifying – History Channel video to the resources on slavery at our class’ U.S. History blog:

This TED Talk was released earlier this year (you can read the transcript here):

I’ve previously posted about the phenomenal series of animated poetry videos TED-Ed has produced (see WOW, TED-ED HAS HIT A GRAND SLAM WITH THEIR VIDEO POETRY SERIES). They’ve been posting them on Facebook and you can see them all there.

Recently, they posted half of them on the TED-Ed YouTube channel. You can see their playlist here.

Here are two of them:

The new book, Ghosts in the Schoolyard: Racism and School Closings on Chicago’s South Side, by Eve L. Ewing, looks like a must-read. You can read an excerpt at What led Chicago to shutter dozens of majority-black schools? Racism from The Guardian. She was interviewed on The Daily Show, and you’ll want to watch it below.

I’m adding this post to The Best Posts & Articles On The Impact Of School Closures — Suggest More!

I’m using this TED-Ed video, along with the info below it, in Theory of Knowledge class when we learn about how statistics can be misleading:

The National Review tweeted out an incredibly misleading chart on climate change, which they have since deleted. It’s perfect for when we study misleading statistics and graphs. You can read more about this, and still see a version of it, at The Washington Post’s Why this National Review’s global temperature graph is so misleading. 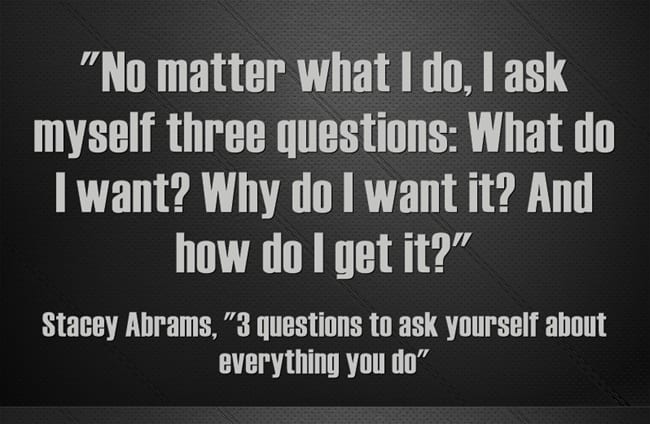 Stacey Abrams, the defeated (barely) candidate for Georgia governor, who had to fight huge voter suppression efforts, just gave an impressive TED Talk. It seems to me that it would be a video just about any teacher would want to show their students for inspiration, and to help them set goals. The three questions in the textbox above would be great ones for students to answer after watching the video. And here’s another line from her talk that will probably be up on a lot of classroom walls:

I’m adding this video to Best Posts On Students Setting Goals and to The Best Video Clips On Goal-Setting — Help Me Find More.

You can see the transcript of the video here, and I’ve embedded it below:

Here’s a new and good video from Newsy (an article accompanies it). I’m adding it to Best Posts On Books: Why They’re Important & How To Help Students Select, Read, Write & Discuss Them:

The American Museum of Natural History published this video. I’m adding it to The Best Sites For Learning About Human Evolution.

Years ago, I wrote a post that continues to be very popular. It’s called The Power of Stories. It’s worth a look, and has lots of good links. Here’s an excerpt:

During my nineteen-year community organizing career, our primary strategy was to learn people’s stories, have them share those stories with others, and then help them develop a new interpretation of those stories. This new interpretation then was the engine that would propel themselves to action. It’s similar to a challenge we face in the classroom—we need to help students connect our lesson content to their background knowledge and then attach new understandings and learnings to it.

Of course, the same thing can hold true in the “public relationships” we develop with students and their families.

Former President Obama provided an excellent summary of the importance of these stories in the context of making social change:

President @BarackObama on how listening to other people’s stories builds relationships, creates change, and helps you understand communities at the #ObamaSummit. pic.twitter.com/3PcTQV0bKR

I’m adding this to The Best Posts & Articles On Building Influence & Creating Change.

The Science of Racism is a new video from YouTube’s “Creators for Change” program. I’m adding it to Revised & Updated: Useful Resources For Learning About Race & Racism:

This is a new video from the PBS station in San Francisco.  You might also be interested in The Best Resources For Learning About Restorative Practices – Help Me Find More, not to mention an earlier post, ELEMENTARY SCHOOL ADMINISTRATORS & TEACHER SHOW PERFECT EXAMPLE OF RACIAL BIAS & INCOMPETENT CLASSROOM MANAGEMENT.

Video – And More: Google Releases Their “Year In Search”

Video: “Explainer: How Are Refugees Resettled In The U.S.?”

Great Christmas Video For ELLS – And Everybody Else, Too!