The Best Theory Of Knowledge Resources In 2019 – Part One 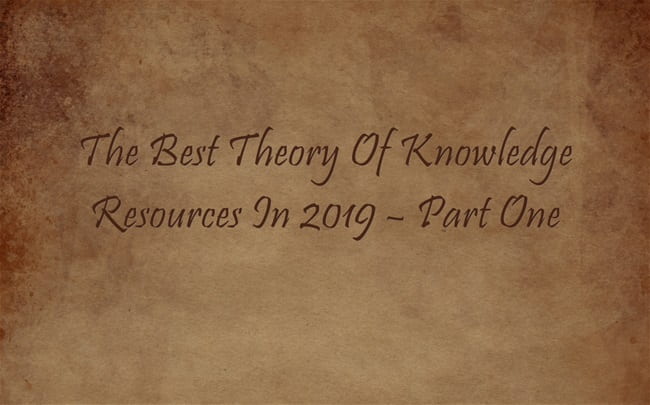 Here’s another mid-year “Best” list that I’m adding to ALL MID-YEAR “BEST OF 2019” LISTS IN ONE PLACE!

You can see all my many Theory Of Knowledge – related “Best” lists here.

Here are my picks from the last six months:

Every several years, the International Baccalaureate Program revises the curriculum for the Theory Of Knowledge class. The last revision was relatively minor. However, at least according to TheoryofKnowledge.net, a private site that creates supporting resources for the class, there are BIG changes afoot come 2022. I can’t confirm that their description of these upcoming changes is accurate, but they’ve been pretty on top of things in the past.I guess it’s time for me to make my once every-several-years dive into the labyrinth of the official IB website to figure out what’s going on. If you are more on top of what’s going on than I am with these changes, please let me know if you think TheoryofKnowledge.net’s summary is on the money. I can’t find anything else on the web about it.  A colleague just went to a TOK training, so I hope she’ll have some info on the future.

I do a lesson in my IB Theory of Knowledge class on moral relativism that generally goes pretty well (see HERE’S MY ABSOLUTISM/RELATIVISM PROJECT FOR TOK – HELP ME MAKE IT BETTER). The BBC published this short video on the same topic that I might add to that lesson.  Below that new one, I’ve embedded another video I found that could be useful, too:

This TED-Ed video is an intriguing one. It’s designed to show how the media can incorrectly report the findings of medical research. It explains three scientific studies – one at a time – and then shows a headline from a news story about it. You’re supposed to then pause the video and figure out why the headline is incorrect based on your understanding of the research. Then it tells you the answer before moving on to the next study. It would be a good video to show to IB Theory of Knowledge students when studying Physical Science.

I’ve previously shared a guest post from one of the developers of the Revised Bloom’s Taxonomy explaining how neither Bloom or the creators of the Revised version every used a pyramid to explain their research (see Guest Post From Lorin W. Anderson, Co-Author Of The Revised Bloom’s Taxonomy and “Knowledge” & Bloom’s Pyramid). Scientific American has published an article explaining that Maslow never used a pyramid, either, to explain his hierarchy of needs (see Who Created Maslow’s Iconic Pyramid?).

The authors of the Maslow article write this:

We are recommending, as some have before us, that a ladder is a better visual representation of Maslow’s hierarchy of needs. The pyramid is shown with horizontal lines demarcating the different levels. This makes it difficult to imagine a person simultaneously being affected by different needs. When one is on a ladder, multiple rungs are occupied by the feet and hands. Other rungs may be leaned on as well. Also, a ladder does a better job of conveying Maslow’s idea that people can move up and down the hierarchy.

This info will certainly come in handy when we cover Human Sciences in Theory of Knowledge class!

Two good pieces have recently come out on the value of intellectual humility: Intellectual humility: the importance of knowing you might be wrong is from Vox and Knowing What You Don’t Know is from Angela Duckworth. This topic has long been an interest of mine – see The Best Resources On The Importance Of Knowing What You Don’t Know. Even though this kind of skepticism is at the essence of IB Theory Of Knowledge classes, I don’t think I’ve ever done an explicit lesson on it. Any ideas?

You may have already seen this clip of Hasan Minhaj explaining to Ellen DeGeneres how to correctly pronounce his name and why it’s important. It’s great! We spend time in my IB Theory of Knowledge classes on names when we’re studying Language, and this will be a perfect addition. In addition, Slate published an excellent article about how Minhaj handled it, and I’ll also be using excerpts from it in class. Here’s the clip on Twitter:

This new video from The Guardian can be useful when we’re studying Memory in IB Theory Of Knowledge:

The entire six weeks we spend on Knowledge Questions and Oral Presentations  is detailed at our class blog, including lots of links, examples and hand-outs – all which are used by tons of TOK classes around the world. You can see samples of Knowledge Questions previous classes have chosen at:

Here are a few from this year:

How do ethics and emotion influence our perception of peace?

How can religion affect inequality?

To what extent does moving to a different place affect one’s perception of their home culture?

To what extent does gender affect our way of thinking?

How do parents’ perspective of gender roles affect their children?

To what extent are our adulthood senses of emotion and perception affected by the myths and legends we have heard as children?

Do what extent does our culture affect our emotions and sense of perception?

What roles do history and culture have in shaping our language?

What roles do reason and emotion play in sports?

I’ve previously posted about a lesson I use in my International Baccalaureate Theory of Knowledge classes when we finish our unit on the Arts. You can check out Play-Doh & IB Theory Of Knowledge: Student Hand-Out & Videos for more details but, basically, students have fifteen minutes to create something with a can of Play Doh and then quickly write a short paragraph – using evidence from what we’ve learned – explaining why their creation is “art.”

Here are three examples of paragraphs students wrote last week (published with permission), followed by short musical slideshows of artwork from both of my TOK classes:

I made a wave of 6 layers to represent my 6 IB classes and in the middle is me, ready to become consumed by the 6 layer wave.  On the outskirts, you have a series of bystanders who are cheering me on.

I decided to make the deathly hallows from Harry Potter.  I also created a snake to accompany it.  This is art because I produced something with emotion , which in this case is joy and bliss.  The Harry Potter Universe reminds me of my childhood and my pure innocence that comes from it – when things were simple.  Tolstoy’s definition of art is “The ability to transmit a feeling one has experienced to others through movements, lines, colours, etc.”  This is why I chose to make the deathly hallows.  I hope it radiates the same mirth with which it was made to other Potterheads.  The snake alongside with it represents my House, because I have Slytherin pride 😊

My creation is art because it is something that expresses emotion.  Throughout the whole lesson on art the only thing that I really understood is how it’s a “transmission of feeling the artist has experienced” (Tolstoy).  Art is one way humans are able to express everything they’re feeling.  I created what I interpret as the ocean – it makes me feel calm and I experienced a state of tranquility as I created it.  But others may have other thoughts when they view it.  What I have created is art because it explains everything I am feeling at this exact moment in my life – a state of balance.

The NY Times published this great video that will be perfect of IB Theory of Knowledge classes (and others). It teaches about confirmation bias and various fallacies, and is done in the style of School House Rock.

Measles is trapped inside a test tube at the C.D.C.! Under the guidance of her wise buddy Polio, she sets out on an adventure to go viral and infect Americans. And lucky for her, there are many parents who subscribe to the logical fallacies that deny science and the success of vaccinations. Can she succeed?

When we’re studying Perception in IB Theory of Knowledge, I often use videos about pickpockets to illustrate illusion.

Here’s a video from Wired that would work, too:

This new video and lesson from TED-Ed will be useful in my IB Theory of Knowledge classes when we study Human Sciences:

Why Does History Matter?

The Best Images Of Scary Views