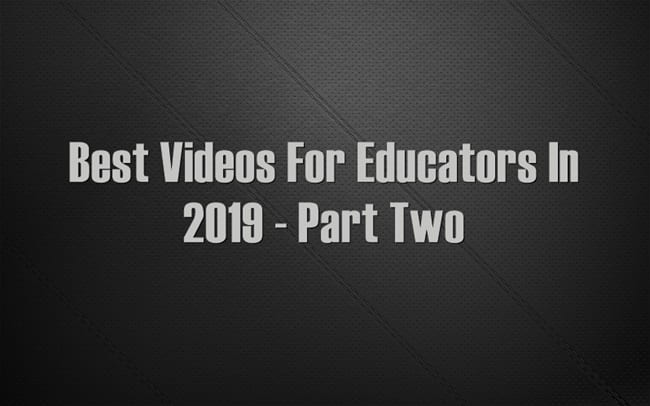 The first was THE BEST THIRTY-FIVE WEB 2.0 APPLICATIONS FOR EDUCATION IN 2019.

The second was The Best Social Studies Websites – 2019 (Part Two).

Now it’s time for the Best Videos For Educators.

Here are my picks from the second part of 2019:

Awhile back, a Swedish TV show on education interviewed me via Skype about student motivation. The show just came out, and they included what I think is a relatively decent three minute clip of me talking about student motivation and growth mindset. I’ve linked directly to that short clip here (they don’t allow embedding).  More importantly, though, Katie Hull and I are doing a four-part video series for Ed Week on student motivation.  They’re taping us next week and, with luck, they’ll be out before the end of the year.

The PBS NewsHour showed this very good overview of what has happened – and continues to happen – Flint:

I’m adding this new video from The SciShow to The Best Resources On Effective Note-Taking Strategies – Help Me Find More:

I’ve previously posted an animated summary of the book, Switch, which has a lot of ideas applicable to education. A revised version was recently published on YouTube by Productivity Game (which was the same site that published the other video two years ago. Here is the new one:

Here is Sandy Hook Promise’s new and powerful PSA on gun violence in schools. You can read more about it at The New York Times article, With Harrowing Ads, Gun Safety Groups Push a Darker Reality. I’m adding it to my other materials on gun violence.

TED-Ed originally posted this video on its Facebook page, and I wrote about it and their poetry series at that time (see ANIMATED POEM: “ODE TO THE ONLY BLACK KID IN THE CLASS” BY CLINT SMITH). They’ve since begun sharing them on their YouTube channel (see the playlist here). I think this one is the best they’ve done so far…. I’m adding it to The Best World Poetry Day Resources – Help Me Find More.

A new TED-Ed lesson and video is on “The secret student resistance to Hitler.” I’m adding it to The Best Online Resources For Teaching & Learning About World War II (Part Two). Even though the organizers of The White Rose were college students, I’m also going to add it to The Best Resources Sharing The History Of Teens Organizing For Justice.

I’m adding this new video from Edutopia to The Best Resources For Learning How To Best Give Feedback To Students:

I’m adding this new video from The New York Times to The Best Resources Sharing The History Of Teens Organizing For Justice:

This new animated video is pretty intriguing. Though it doesn’t really use the term “growth mindset,” it talks about the concept using a slightly different perspective using research on “the locus of control.” It basically means that by praising effort instead of natural ability, motivation is increased because it is within the person’s control. Obviously, not everything is within our students’ control – racism and other socio-economic issues affect that ability. But I think this video’s perspective is a nice complement to the ideas of growth mindset, agency and deliberate practice – all which emphasis the importance of student self-efficacy. I’m adding this post to:

The Best Resources On Helping Our Students Develop A “Growth Mindset”

The Best Resources For Learning About The 10,000 Hour Rule & Deliberate Practice

I’m adding this segment from PBS NewsHour to A BEGINNING LIST OF THE BEST RESOURCES FOR TEACHING ABOUT REPARATIONS:

The YouTube channel “Sprouts” has published this animated over of the International Baccalaureate Program. It’s not an official IB production, but seems to give a decent overview. As regular readers know, I’ve taught IB’s Theory of Knowledge class for years and regularly share related resources on this blog.

I’m adding this new video to The Best Posts, Articles & Videos About Learning From Mistakes & Failures:

I’m adding this new video from The NY Times to The Best Sites To Learn About Walls That Separate Us:

The BBC published this excellent new video. I’m adding it to Best Posts On Books: Why They’re Important & How To Help Students Select, Read, Write & Discuss Them. You might also be interested in The Best Resources On The Study Finding That Reading Books Makes You Live Longer.

Check out the new trailer for the upcoming movie featuring Tom Hanks as Mr. Rogers! And, just below that video, watch a genuine Mr. Rogers commencement speech…

Here’s how The NY Times describes this new video they published:

“…children read testimonies given by young migrants detained in Customs and Border Protection facilities. They reveal harrowing stories of children living in cages, going hungry and tending to infants without their parents.”

You’ll want to watch this new Vox video about the SAT Exam:

TED-Ed added a video of the famous poem on the Statue of Liberty, one that particularly important in light of the constant attacks on immigrants we’re experiencing these days. I’m adding it to The Best Sites For Learning About Immigration In The United States.

I’m adding this video from the PBS NewsHour to The Best Resources For Learning About School Desegregation (& Segregation) – Help Me Find More:

I’ve previously shared a fair amount about the concept of loss-aversion (see The Best Posts On “Loss Aversion” & Schools), and they’ve primarily been critical “takes.” Loss aversion is basically the idea that we can get more motivated by the potential of losing something more than by the prospect of gaining something. This new video, though, makes some interesting points about relating it to goal-setting – when we set goals, at least consider what we might lose by not achieving our goals, as well as what we might gain from it.

Video: “What exactly is a brokered convention?”

Video: “The Largest Cities Throughout History: Every Year”