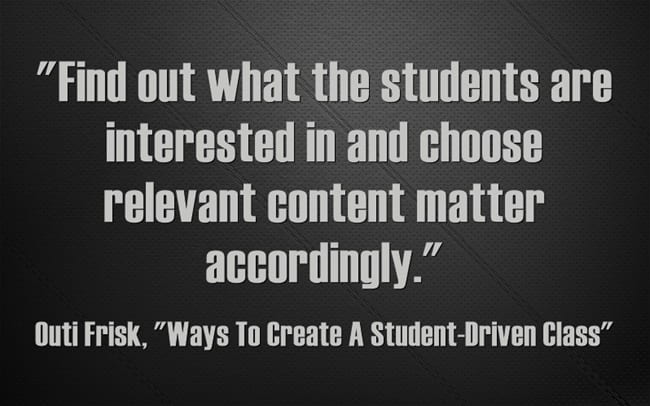 Editor’s Note: Earlier this month I published We Shouldn’t “Empower” Students – Instead We Should Create The Conditions Where They Can Take It, and invited readers to answer this question:

What are actions you take to create conditions for students to gain and exercise power in your classroom?

Outi Frisk submitted this previous guest post, which had previously appeared at Ditch That Textbook.

Outi Frisk is an English Language Educator in Sweden with a long experience of teaching English to all age groups, from young beginners to high school students and their teachers. She has a website for English (ESL/EFL) teachers, WebEnglish.se.

One day in 2005, my student, Malin, walked in looking for me just to tell me that she used to hate English before I became her teacher. The reason, she said was: When I got to decide a little myself, I could learn more because I was more interested.

That’s when I knew I was on the right track.

This is how it started: I was teaching a 5th grade ESL/EFL class in Sweden and there was a chapter in the textbook about King Henry VIII, who happened to be my favourite in the line of British monarchs. I told the story of his six wives the best I knew how with an amazing result: The class made a unanimous request to learn more stories like that!

I paused for about 5 sec, and said: “If you want, we can throw these textbooks out of the window”, while pretending to toss the book out, and continued: “and study only British history. I could tell you the stories and then you could write about what you have learned.”

They agreed and we started from Stonehenge; I collected the material into handouts with text and pictures, we discussed the stories in class and they wrote what they had learned as homework. The following lesson started with some students reading their stories before we went on to the next.

We continued even after the summer break, until we got to Queen Victoria. That’s when they felt tired of history and we chose something else to study, but I never looked back at textbooks after that.

An added bonus was their history teacher who told me later that this class had a generally better understanding of history than his other classes.

In these 20 years I have gradually developed the method and created a website WebEnglish.se to go with it.

5 steps to show your students that they are in charge

Ask your students what they can recall as having been the best and the worst activities in their former English studies.

I always say to my students: English is a World Language. You can read about anything in English.

If their wish is not in the WebEnglish.se list of topics, I still make it happen. One time, I learned a lot about the FBI after one student suggested it and the others agreed.

5 steps to let your students do the planning

Give your students a list of topics either on paper or digitally eg. in Google Forms.

When going through these steps, remember that the students only choose the topics to be studied. The teacher is responsible of the pedagogy and covering the curriculum.

Year Seventeen In The Classroom Begins On Thursday!

Guest Post: “Distance teaching of ELLs – a week in reflection”

“Middle School Teachers, Do You Need Advice? Check Out This Wisdom”