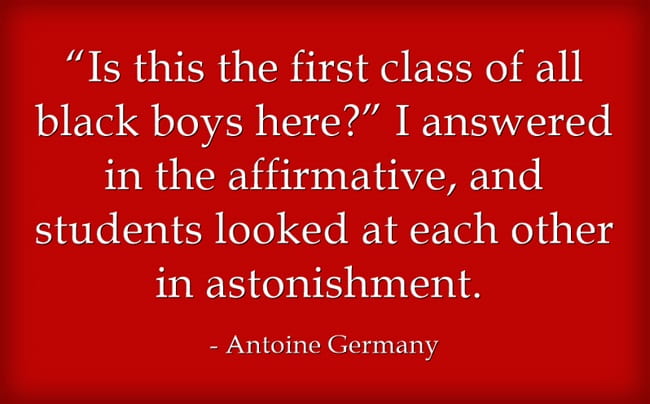 Editor’s Note: Yesterday, a study was released finding that classes supporting African American males resulted in reducing their drop-out rates. Following links to articles about that study, Antoine Germany, the head of our school’s English Department, writes about his experience teaching a similar class this year.

Here are links to articles about the study:

This is immensely encouraging evidence on reducing dropouts for African-American HS students.

I’m adding this post to The Best Posts On The Value Of Ethnic Studies Classes – Help Me Find More.

The other day one of my students raised his hand and flatly stated, “I’m surprised you haven’t given up on this class.” The other students in the class nodded their heads in agreement. Another student ventured a question, “Is this the first class of all black boys here?” I answered in the affirmative, and students looked at each other in astonishment.

The Men’s Leadership Academy is a class of a little over twenty black male, inner city students here at Luther Burbank High School in south Sacramento. The class is based on a body of research that points to young men of color achieving at higher levels when they are taught by men who look like them. This research suggests that placing students as a homogeneous group can have long term benefits for students such as having less behavioral issues, increased graduation rates and an increase in academic outcomes for the identified group.  Our principal, Jim Peterson, has taken a special interest in equity at our school and under his leadership has courageously made black student achievement one of his chief goals. It was under this goal that he tasked me with teaching a leadership class of all black males of mixed ability, grade level and academic success.

The class focuses primarily on issues of personal development and responsibility and touches on issues of mass incarceration, toxic masculinity, identity, and systemic racism.

When I first began teaching the class I was struck by several things: the first was how many of the students were used to not being held accountable for their actions. Let me be clear, students were used to being sent out of class for misbehavior or allowed to have extended bathroom breaks, but they were not used to being pushed to work consistently in class. Students kept commenting on how I wouldn’t let them off the hook or refused to kick them out of class. Being pushed to work, and think, and reflect in class from bell to bell was something so novel that students marveled at it. I got comments like, “You expect me to use sentences in this class?” Or, “Why are you always on me to use periods?” They genuinely were astounded that avoidance was no longer an option in this class.

My second observation was the amount of remediation many of the students needed when I started to view their work. Students were having difficulty spelling correctly, writing complete sentences or writing paragraphs. As an English teacher by trade, I realized that many of the students’ misbehavior or attempts at avoidance was based on them trying to cover up their academic challenges. I’m a firm believer that knowledge is power, but skills are its engine. Students that have limited skills in terms of reading, writing, speaking and listening are hampered in what they can actually do with knowledge.

The final observation I had was how tremendously talented these young men are. Their depth of thought, charisma, humor and unbridled enthusiasm was striking to me. Sometimes the students hid their talents through bravado or off-task behavior, but when they are challenged to do and be more they have always exceeded my expectations.

This leads me to where I began; the student who stated that he’s surprised I hadn’t given up on the class was uncovering an uncomfortable, unspoken truth that all the students in the class knew. These students are often the behavioral issues, the students excluded or confined to being “challenging” or in need of intervention. They were so used to being given up on, or teachers being afraid of them, that they were shocked that someone cared enough to continue to work with them despite the challenges. This has been the most profound lesson that I’ve learned from the young men in the class—that as a man of color, but more importantly as an educator, I have a responsibility to the young men who too often have been overlooked, over-disciplined, marginalized, categorized and dismissed to not give up on them, and to show up for them every day.

And the students noticed.

Here’s A Bunch Of “Fun Stuff” On Education – We Can All Use A Laugh!

Video: “The UN International Decade of Indigenous Languages begins in 2022”