A Look Back: Responding To Racist “Go Back To Your Country” Trope 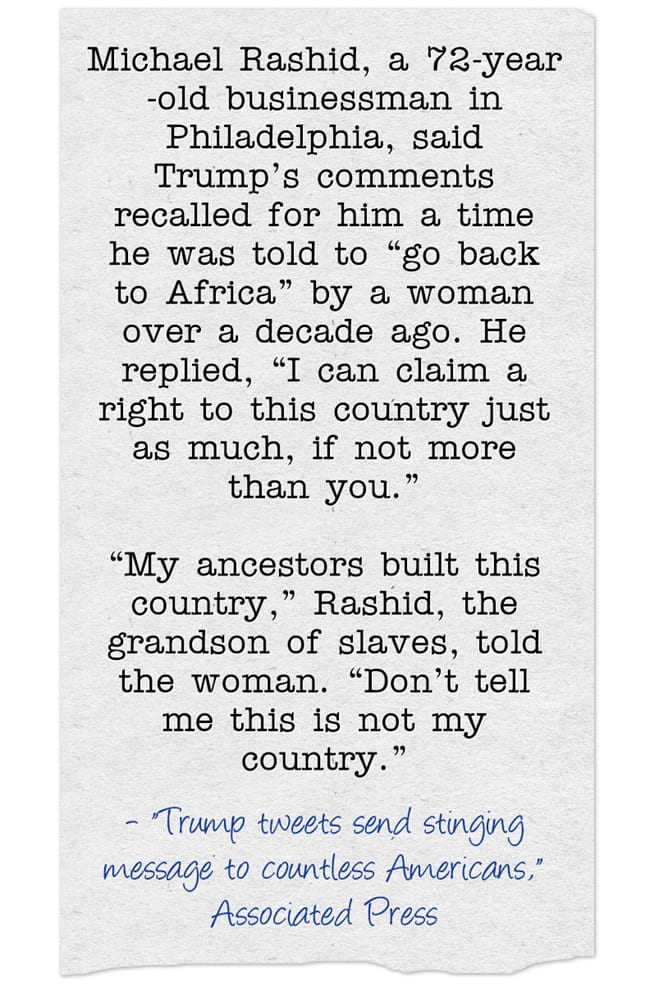 So many of our students have had to deal with taunts of “Go back to your country” over the years, and President Trump is doing his best to ensure it goes on for a long time to come.

Hate Crimes In U.S. Increased By 17 Percent last year, and I fear the numbers will continue to increase.

Behind Trump’s ‘go back’ demand: A long history of rejecting ‘different’ Americans is a good article in the Washington Post given some historical perspective on the “othering” of certain Americans, as well as NPR’s ‘Go Back Where You Came From’: The Long Rhetorical Roots Of Trump’s Racist Tweets.

Even though most of us are out of school now, it’s a safe bet that President Trump will continue with racist attacks after we enter the new school year.

Americans Are Sharing What It’s Like To Be Told To “Go Back To Your Country” After Trump’s Racist Attack from BuzzFeed News.

Have You Been Told to ‘Go Back’ to Your Country Even Though You Are American? Tell Us About It. from The NY Times.

Trump tweets send stinging message to countless Americans is from The Associated Press.

Over 4,800 people wrote to the ⁦@nytimes⁩ sharing painful, confusing stories of when they were told to “go back” home. I interviewed a few of them – all Americans – starting with a woman who was 7 years old when she first heard it. https://t.co/sSV3MDMfDe

Civil Rights leader Rep. John Lewis on President Trump’s racist tweets: “What he said, and what he continues to say, is racist. It is racism. You cannot hide it. You cannot sweep it under the American rug.” https://t.co/XcDKbjZ1ui pic.twitter.com/sPQDLL1JNd

The federal government body that polices racial discrimination at work, uses “Go back to where you came from” as literally textbook example of potentially unlawful bigoted harassment. https://t.co/X4odzVu7mD

“Go back to where you came from” is a vile phrase many of us have heard for years. It came up again when President Trump used it to attack 4 Dem. congresswomen of color. We asked readers if they’ve been asked to “go back,” and more than 16,000 responded. https://t.co/aeiUciaFbv pic.twitter.com/fBAureiBw0

A Look Back: “Three Videos Of English Language Learners Giving Advice To Teachers”