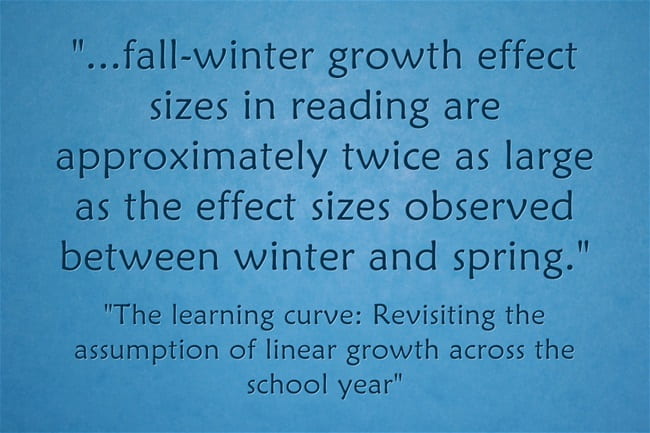 A couple of times when I’ve been interviewed this month, I’ve tried to put school closures in a bit of context: Seventy percent of the school year had already been completed by the time we closed. Of the remaining thirty percent, one week was going to be spring break and two weeks were going to be devoted to state testing, and not much learning happens during that time with all the disruption. The last two weeks of school are not known as times of high academic engagement, and of those last two weeks, our seniors, at least, leave a week early. So, I think we’re really talking about realistically missing about fifteen percent of learning time from the school year.  And it’s likely that most students will learn at least something through remote teaching.

Now, a new study adds even more context to the impact of school closures at this time of the year. The study’s authors find that learning gains happen at a much higher rate during the first part of the school year than in the last part.

Here’s a quote from The learning curve: Revisiting the assumption of linear growth across the school year by Megan Kuhfeld and James Soland:

The effect sizes show that, while the linear growth assumption appears tenable in some grades for math, growth in math for several grades and in reading across most grades appears to decelerate during the school year…. In the middle school grades, fall-winter growth effect sizes in reading are approximately twice as large as the effect sizes observed between winter and spring.

This is not to say that no learning loss will occur during school closures this spring.    But I also think the sky isn’t falling, either.

The paper’s authors don’t offer suggestions about why they think this fall-off occurs.  But I think it’s safe to say that some of the things I mentioned earlier – like the disruptions caused by standardized testing and the typical loss of engagement during the last couple of weeks of school play some roles.

Any teacher of English Language Learners also knows that ELL Beginners appear to make faster progress in English than those who are more English proficient.   I wonder if this could correlate to what happens in many other subjects – as students gain in proficiency, what they are learning becomes more complex and takes more time and effort?

The study also comments on what I would call misguided efforts to extend the school year:

…the questionable assumption of within-year linearity has implications for our understanding of how extending the school year might affect learning….Given much of the current justification for extending the school year assumes students will continue to learn at the same rate during the extra time added, our findings indicate that a portion of the related research base relies on an assumption that is often not justifiable.

You might also be interested in The Best Resources On The Idea Of Extending The School Day.

Some Posts On Motivation