Alice Mercer teaches third grade at an elementary school in Sacramento, CA. She started her career in Oakland, Ca, and moved to Sacramento in 2001. She is the parent of a now-adult son with ASD, and is a caregiver to her husband who is medically fragile. Alice is active in her union and on social media.

This comes from Tom Wolfe’s The Right Stuff, and describes engineers and pilots at Edwards listening to black box recorders from test pilots who did not survive. It was a slice of a moment meant to convey that while other people would be freaking out, calling for mom, God, etc. some folks will be analyzing the situation and trying to fix it until…the…very…end. I put this out there because I’ve been thinking about what happens when all the choices left are not great or just plain bad.

I had a conversation with a co-worker the other day, and we were reflecting on the transition to distance learning, and she said something that I hadn’t thought of and was kind of profound, “We were all in trauma as we were transitioning to distance learning.” I was so busy making things work, I didn’t think about it then, and since I made it work I don’t think much about it now, but we were all in trauma and we are still in trauma. We all bring our personalities and experiences to this trauma, and some of my thinking is not always helping.

Five years ago my husband of 25 years had a brain stem stroke. It was bad. The neurologist was doing that “I tried A, B, C,” statement. There are few things more rattling than seeing a trained and experienced medical professional run their entire repertoire of responses and come up short. If he fixed one problem, the other would worsen. Nothing but bad choices.

The doctor was bringing me up to date, and I was listening and asking not unreasonable questions. He then became mad at me, and started raising his voice, “I don’t think you understand how serious this is!” and words to the effect that this situation involved mortal peril. I knew my husband was dying and had no illusions about how serious the situation was. This doctor was in trauma because he cared about the situation, and didn’t like having a conversation with a youngish, potential widow. What the doctor didn’t know was that I had experienced trauma myself, and because of that, I learned not to respond to situations like this with a lot of emotion. That means that in extremis, even though I’m pretty emotional and can be hot headed, I will become quite cool. Sometimes, people react really strangely to that. They think you’re not listening, they think you don’t understand. What they don’t understand is that you could be in trauma. Even though I was keeping it together, I had to ask the hospice team to facilitate the communication with this doctor because I felt that I couldn’t be responsible for managing his emotional response, while I was dealing with my own, because although I looked like I was handling things, it was too much for me to deal with.

She was simply listing all the deficiencies, and was mad about it. Yes, this is not optimal for child development. This is not going to be great for a whole generation of kiddos who are expected not to hug their school friends. At this point, I blocked her. Not just for me, but for her, she didn’t need my telling her to tone down, and I didn’t need her tone. We weren’t friends. Probably by September, she’ll have this all worked out, but for now, it’s messy.

When I see folks having a very emotional response to proposals for how to return to school in fall and saying “It’s impossible!” or “No WAY!” or “This is awful! I wouldn’t send my kids into that!” I’m not being particularly patient. But it’s because they’re processing this, they’re working through it out loud because this is some scary stuff. I’m not being a good human being. Maybe I’m being like a mirror of that doctor and not giving them their space. On the other hand we’re all living through a real-life “Trolley Problem” now. There are not perfect decisions, and sometimes there are only really bad alternatives. 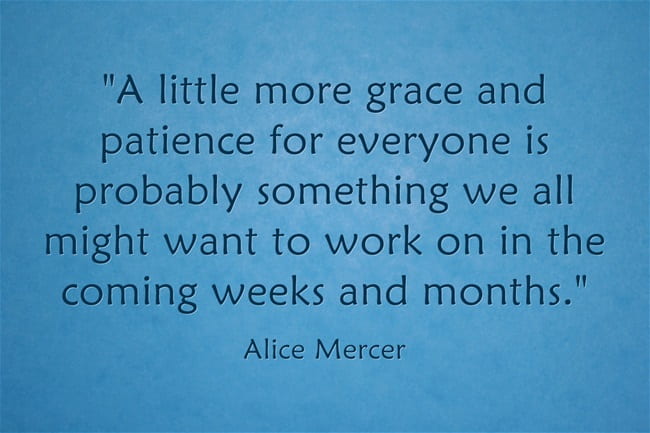 My problem is this, I’ve been in the land of bad choices before. I’ve learned to negotiate it.

I remember at some point after his stroke, we had a rehab option put to us for Terry that was nearby. I posted about it on Facebook. Someone who used to work for the company running it told me not to do it because it was awful, and I had to tell them, “Thank you, but where he is now is not good either and I literally have NO OTHER CHOICES.” I’m sure they thought they were saving me grief (it didn’t because the deal with our insurer fell through), but really, there were no good choices. I mean, seriously, no good choices. Eventually, I sent my husband 100 miles away to a skilled nursing facility because our insurance would not and could not provide care anywhere closer. I could have dug in my heels and forced them to keep him in the hospital (not like they could kick him out), but he wanted to start rehab, and that wasn’t going to happen effectively unless he went to a facility. It was awful, but it taught me, I can put up with a lot for a year.

Statistic Of The Day: Eight Million More People In US Fall Into Poverty Since May