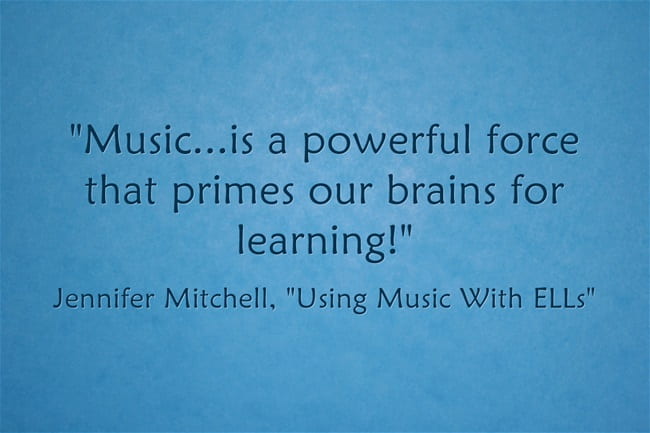 Jennifer Mitchell teaches high school ELs in Dublin, Ohio. Connect with her on Twitter: @readwritetech or on her blog.

Music has always held a special role in my life. I’m known for humming without even knowing it, and between songs in my Spanish classes (first as a student, then as a teacher) and my passion for marching band, my brain (and phone) are full of such a variety of songs that you never know if Maná, Chicago, or Wagner will leak out.

Even though music was always a part of my Spanish classrooms, I struggled to find where it fit in my shift to teaching ELs. However, while studying Zaretta Hammond’s Culturally Responsive Teaching and the Brain with colleagues last fall, the benefits of music clamored to make their way into my classroom. I realized (or remembered) that music is not just a fun activity, one way to connect with students, or listening practice; it is a powerful force that primes our brains for learning! (I wish I could pull evidence from Hammond’s incredible work, but that book has been locked in my classroom since we left in March!) There’s a reason J.K. Rowling has Albus Dumbledore call music “a magic beyond all we do [at Hogwarts]”: Music is one of those uniquely human experiences that digs deep into our hearts and our minds. Moreover, as I learned from Hammond, it’s especially powerful for students from collectivist cultures with rich oral traditions, an ever-increasing population at my school as more students come to us from countries such as Guatemala, one of the most collectivist countries on a list in the book.

Eager to tap into the power of music for ELs, I decided to implement a song study routine that would supplement another essential idea from Hammond’s work: frequent brain breaks. Songs during transitions could make our activities flow more efficiently while also providing important time for student brains to process information! But I knew that for my newcomer ELs, listening to songs in English would be most beneficial if the songs were comprehensible. Remembering Christopher Lehman’s work in Falling in Love with Close Reading, I realized that purposeful song study could be a powerful way to practice some of our most important listening and reading skills.

I brainstormed a variety of motivational songs and scoured YouTube for the best videos of them (preferably the real music video with closed captions, or if not, an accurate lyrics video), putting together a playlist of possible songs.

Once or twice a week, we went through the following song study routine with a new song:

After we studied a song, it became part of a rotation of songs that we’d listen to during transitions between activities or for a brain break. As we became more familiar with our favorite songs, there was plenty of singing, seat-dancing, and even full-blow dancing! Students also had the link to our playlist so they could listen to the songs on their own, and I hope some of those songs made their way onto their phones, just like those Maná songs from my high school Spanish class so many years ago.

Banning Racism With As Much Enthusiasm As Banning Fidget Spinners