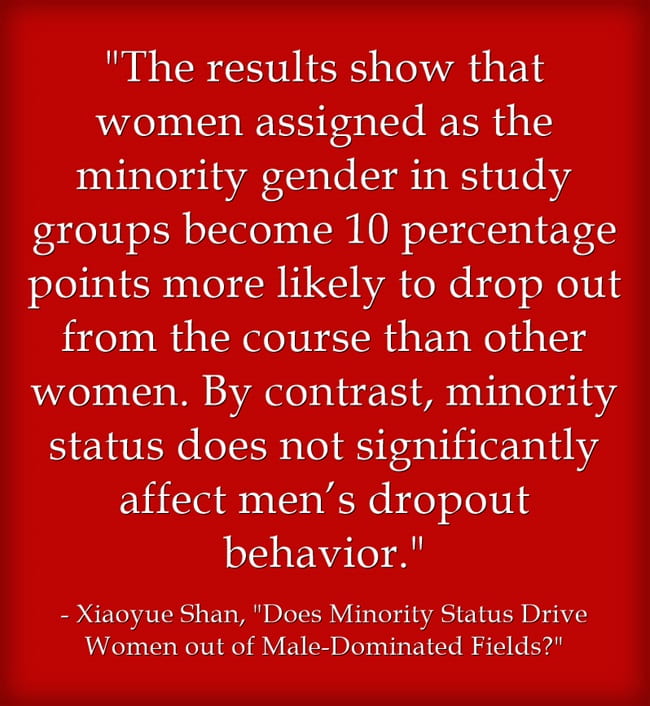 Does Minority Status Drive Women out of Male-Dominated Fields? is a study that just came out.

It suggests that women in a college course who are assigned to small groups where there are fewer women than men are more likely to drop the course.

Just this week a young woman in one of my high school classes asked me if she could be put in small groups that only had young women, and that’s happened a handful of times during my teaching career. Of course, in this case and in all prior cases I immediately inquired if there had been any harassment or inappropriate behavior by young men that prompted the request.

In this case, as in all previous cases, I was told no, they just felt more comfortable working in groups composed of women.

At the beginning of every year, I have my IB Theory of Knowledge students read an article from Scientific American, How Diversity Makes Us Smarter. It’s part of an on-going effort on my part to encourage students to freely choose to work in small groups that are diverse by gender, race and culture.

Though a single study isn’t making me rethink that strategy, it is raising questions in my mind. I do a lot of small group work and, come to think of it, it does seem that when students can choose, there tend to be more all-women groups than all-men ones.

I certainly don’t want young women to feel uncomfortable in small groups and, apart from those handful of times, the issue hasn’t come up.

Quote Of The Day: The Role Of Motivation In Language-Learning