The Best Videos For Educators In 2020 – Part Two 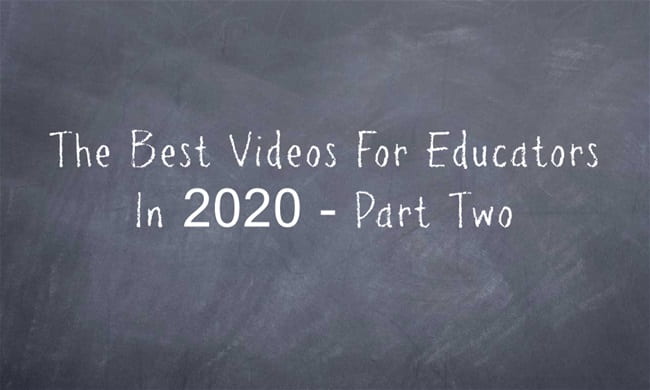 Now it’s time for the Best Videos For Educators.

Here are my picks from the second half of 2020:

A few months ago, I posted Implicit Bias Training Doesn’t Seem To Work – So What Should Teachers & Others Do, Instead? It examined the ineffectiveness of implicit bias trainings, and explored some possible alternatives.

This TED-Talk subsequently came out “How racial bias works — and how to disrupt it | Jennifer L. Eberhardt” and offers another idea (you can find the transcript at that link). She talks about creating “friction.” In other words, a tool that forces people to pause and think before they take an action.

I’m adding this new video to New & Revised: Resources To Help Us Predominantly White Teachers To Reflect On How Race Influences Our Work:

I’m adding this video from Stephen Colbert’s show to New & Revised: Resources To Help Us Predominantly White Teachers To Reflect On How Race Influences Our Work:

This TED-Ed video is on Noam Chomsky’s theory of universal grammar.

The Brainwaves Video Anthology is an impressive collection of short videos where retired educator Bob Greenberg interviews teachers around the world.

Here’s a new short one of my talking about “Teaching in the Pandemic”:

I’ve also embedded some quotes from it after the video.  I think they could be particularly useful in a classroom lesson.

“John Lewis will be a founding father of what will be a fuller, fairer America” President Obama

“You look at those pictures, and John looks so young, and he’s small in stature, looking every bit that shy and serious child that his mother had raised. And, yet, he’s full of purpose.,” President Obama at John Lewis’ service talking about images of Lewis right before Selma

“Once you learn something, once you get something inside your head, no one can take it away from you” – President Obama recounts what John Lewis’ mother told his son.

The VirtuEL Conference took place during the summer – it provides lots of great professional development sessions by ELL educators for ELL educators.  This one was its fourth annual one.

And, they invited me to give the keynote, which you can watch below.

You can access all of the great sessions, and there are a lot of them (in addition to sessions from previous years, here.

Education Week published a new video Katie Hull and I did with them sharing tips for new teachers entering a remote/hybrid teaching environment this fall.

I think veteran teachers might find it helpful too.

I’m adding it to my video page, where you can find quite a few other useful ones…

You can read about her and the film at “For a minute-long sequence, I cut together 480 clips”: This 15-year-old director’s short film about quarantine is going viral.

I sent out email messages on our Infinite Campus system a month before school began, tell students and parents/guardians how much I was looking forward to seeing them, and invite them to join the Google Classroom for our classes (it’s difficult to send them out directly from Google Classroom because our district has not yet “populated” that database).

When they joined Google Classroom, they will see this short welcoming video, along with see some opportunities to do some classwork in August for extra credit.

The videos I made for my ELL classes will be bilingual, but this one is English-only:

I’m adding it to TEACHING RESOURCES ABOUT IF POLICE SHOULD BE IN SCHOOLS.

I’ve done a lot of professional development sessions for teachers at our school, and having student panels are always the most popular parts of them.  Plus, they are great learning experiences for the students!

During the summer, I led a PD session virtually for the first time – boy, that’s a different experience!  It was on “Instruction & Student Motivation In Distance Learning.”

And, it had a student panel that included, but was not limited to, ELLs.

After the session, several agreed to present a version to be recorded – with parent permission, of course.

These were the questions they answered:

I’m adding it to THE VERY BEST RESOURCES TO SUPPORT TEACHERS DEALING WITH SCHOOL CLOSURES IN 2020 – PART ONE.

This is an interesting new video from Stats Media:

Nike’s new video honoring Kobe Bryant would be a great one to show to show to students and then ask them what things do they want to get “better” at and what their plans are to make that happen.

The Best Video Clips On Goal-Setting — Help Me Find More

As we all know, we teachers need to be very sensitive to the SEL needs of our students all the time, and even more so when many of us are working in a distance learning environment.

In addition to having about ten ten-minute individual meetings with students in video conferences each week (see “INDIVIDUAL MEETINGS” ARE THE BUILDING BLOCKS OF A SUCCESSFUL COMMUNITY ORGANIZATION & THEY CAN BE THE SAME IN A DISTANCE LEARNING CLASSROOM), I have all students complete a simple Google form where they rate how they’re feeling about school and their lives, if they are having any technical problems, and if they have any other concerns.  Of course, if you ask, you have to respond, but the extra time has clearly paid-off for everybody.

As regular readers know, I have been a fervent advocate of having students do anonymous evaluations of teachers and classes (not for formal evaluation purposes, though!).  I have always learned a lot from them, and usually do them at the end of each semester (see My Best Posts On Students Evaluating Classes (And Teachers)).

Then I saw the new Edutopia video embedded below.

That was my realization after viewing the video, which suggests just that.

Their recommended questions are not earth-shaking (“Are my assignment clear?”).  But, really, that is the kind of basic feedback we all need – what’s clear in a physical classroom where I can be available immediately for any kind of needed clarification is a different kind of clarity than what is needed in a virtual classroom where students are in breakout rooms and I can’t be in all of them at the same time.

Watch the video and I suspect you’ll do what I’m doing – preparing a simple Google Form that students can spend one minute on tomorrow in order to give me feedback….

Video: This Is Me Trying To Keep Pace With Distance Learning Lesson Planning….:

Here’s how the Crash Course site describes this video:

At the end of our journey through modern European history, we’re taking an episode to look back at how the practice of history developed and what the aim and goals and purpose of history have been. We’ll also take time to consider how we should approach history research and writing going forward.

Of course, since it’s part of their European History course, it is pretty Eurocentric.  Nonetheless, it’s still pretty interesting.

THE BEST – & MOST INTERESTING – RESOURCES FOR STUDYING HISTORY

Dr. Carl Wieman is a Stanford professor and a Nobel Prize winner,  and he’s also done important work over the years trying to shake up the antiquated lecture style of so many college courses.  Much of that work is also applicable to K-12 settings. He also helped establish PhET Interactive Simulations, which are well-known among science teachers.

You can see a guest piece he wrote a few years ago for my Education Week Teacher column, A Nobel Laureate Writes About Becoming A “Science Coach.”

He just was awarded the 2020 Yidan Prize for education research, which is the most financially generous education award in the world – $4 million!

His work on teaching has been focused on promoting “active learning.”  He’s got his particular step-by-step strategy to use that in the “lecture hall,” but generally that concept means what most of us think it does – interactive lessons including small group activities that are different from the passivity of listening to a lecture for an hour.  He also includes and credits the work of Professor Eric Mazur in this area (see “Twilight Of The Lecture”).

You can find a whole lot more about active learning at The Best Research Demonstrating That Lectures Are Not The Best Instructional Strategy.

I’m adding this new video to The Best Resources To Learn About World Teachers Day (which is on October 5th):

TED-Ed Video: “What you might not know about the Declaration of Independence”

Four Great Videos Showing There Is Strength In Unity