How Will Probable Biden/Harris Administration Immigration Policies Affect The Number Of ELLs in Schools?

I’ve previously published several posts about our Presidential election, including:

WHAT EDUCATION POLICIES CAN WE EXPECT FROM THE BIDEN ADMINISTRATION?

IT LOOKS LIKE THERE ARE NOW FOUR OPTIONS FOR A STIMULUS PACKAGE FOR SCHOOLS & OTHERS – WHICH DO YOU THINK IS MORE LIKELY?

WHAT MIGHT THE RESULTS OF THIS PRESIDENTIAL ELECTION SUGGEST THAT TEACHERS (& OTHERS) SHOULD DO GOING FORWARD?

Now, it’s time for some thoughts on how Biden/Harris administration immigration policies might affect English Language Learners in schools….

The latest ELL statistics available for U.S. schools are always about two-and-a-half years behind the present, as I wrote about in a post last year, A Look Back: What Impact Will Trump Administration Policies Have On Future ELL Numbers? Here Is My Guess, & I Would Love To Hear Yours.

At that time, the latest stats were from Fall, 2016, and showed that ELLs comprised 9.6% of the school population.

In that post, I predicted there would be a light uptick in that number for the following year, and then decreases, perhaps by 2020 to as low as 9.2%,  because of Trump Administration policies.

I was correct on the slight uptick, as you can see from this illustration from The Condition of Education 2020: 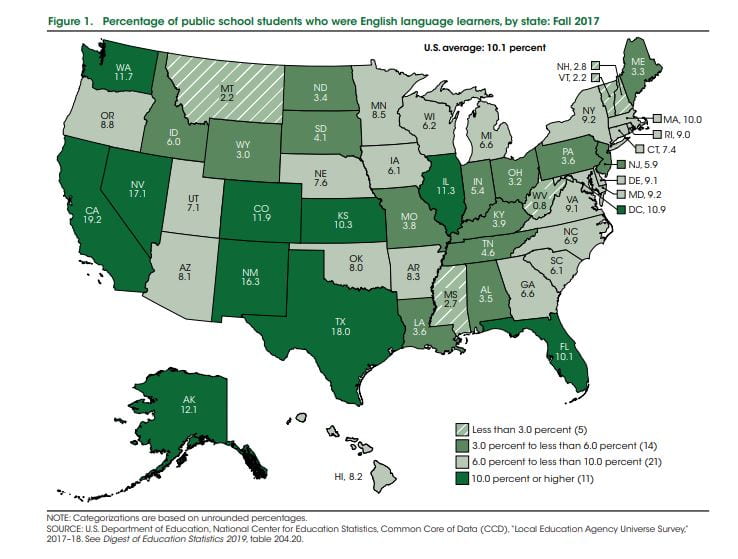 We’ll have to wait until May to see if the numbers went down in the next year. Certainly, if what has happened in our school is any indication, that prediction will prove to be accurate.

In the Biden campaign’s immigration paper, several pledges are made that should reverse this trend.

One, he pledges to increase refugee admissions to 125,000 and to up that number even further in subsequent years. This will be a welcome change from the Trump Administration, which has reduced refugee numbers to the lowest in the history of the U.S. refugee program and then refused to release any future numbers (see “Give Me Your Tired, Your Poor, Your Huddled Masses Yearning To Breathe Free” – Never Mind). This should definitely impact schools across the country, and especially ours, since Sacramento historically has accepted thousands of refugees.

The Biden campaign also has pledged to dismantle the Trump Administration’s illegal and inhuman asylum policies, and reinstitute the successful programs that allowed asylum-seekers to stay in the U.S. while their requests were being reviewed. This change should also result in higher numbers of ELLs entering our schools.

The Biden campaign also says they want to provide support to Latin American nations to improve their economies, safety and infrastructure. In the long-term, that should mean fewer immigrants feeling a need to emigrate to the U.S. In the shorter-term, however, I suspect it’s a safe bet that, with Trump gone, the number of people trying to enter the U.S. without asylum cases is likely to increase, too, and that should result in more ELLs enrolling in schools.

These changes are going to take time, however. I would not bet on any increase ELL enrollment until Fall, 2021 at the earliest, and that’s assuming that a vaccine against COVID-19 is widely available (though I could see the refugee number increasing fairly quickly). Overall, I would guess that most schools won’t be affected until Spring, 2022. Of course, getting an influx of new students late in the school year is not going to be an easy situation for anyone to handle.

In the long run, of course, the more immigrants that come to the U.S., the better it is for the future of our country. Reversing the past several years of anti-immigrant policies, though, might mean that things could be a bit bumpy in the short-term for schools having to re-adjust…

Will California Schools Finally Get The Resources They Need?