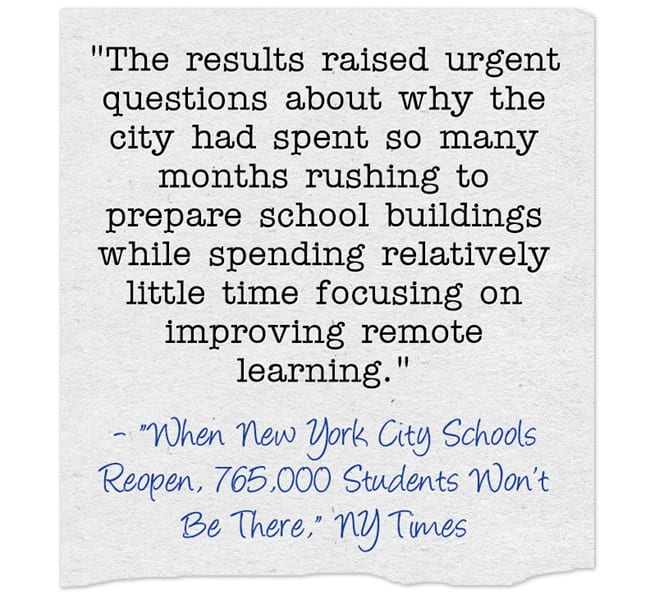 The quote above is from an article in today’s New York Times discussing this week’s closure of New York City’s schools, and reflects a failing not just of New York City, but many other school districts, including our own.

Last night, I watched part of our district’s Board meeting (I can no longer handle watching them in their entirety), and it led off with everything they were doing, and the money they were spending, to get schools ready to welcome students to physical campuses – the same day San Bernardino schools announced they would be all remote for the rest of the school year, and it’s becoming increasing clear that they will be the first of many…

What if, instead, they used those resources to provide outreach and social service support to the ten percent of our district’s students that we are likely to lose permanently, and aren’t going to saved by going hybrid.

What if, instead, they used those resources to provide support that teachers can use (not the professional development that those in the Central Office who have never taught a remote class think we need)?  They could start by asking us!

What if, instead, they used those resources to figure out and expand remote support for our students who have many learning challenges?

What if, instead, they used those resources to pay teachers to teach extra remote classes for English Language Learners (instead of teaching like me choosing to teach multiple additional classes for free each week because we don’t want our students to fall behind)?

I’m not holding my breath – about our district or most others….

Research Says The Best Thing To Do To Reopen Schools Is Reduce Community Infection – Wear A Darn Mask!