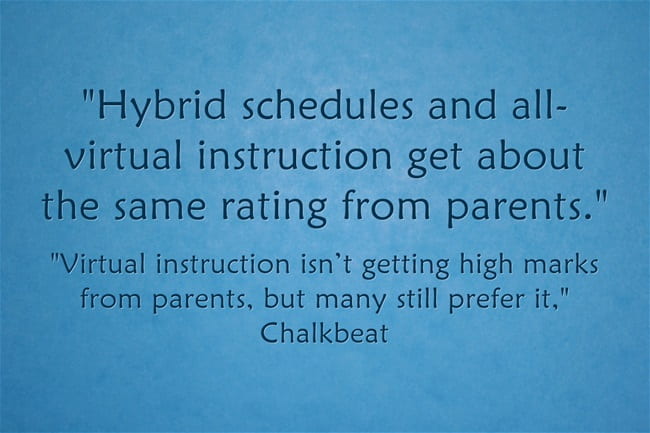 Last week, I published a post titled This Is The Question So Many Districts Need To Asked – & Challenged On – Right Now…, where I recommended districts stop putting so much time and resources into preparing for the possibility of hybrid instruction.  I shared several actions they should be taking, instead.

Now, national polls are finding that parents are rating hybrid instruction the same or even worse than full-time virtual learning (see Virtual instruction isn’t getting high marks from parents, but many still prefer it).

I can understand why they feel that way based on what I’ve been hearing about them. If our district chooses to go that route (which, with local infection rates, doesn’t stand a chance of actually happening, even though they are wasting enormous resources on preparing for it), it will result in huge disruptions to high school and middle school classes and likely less instructional time – at least, at our school – for our most vulnerable students.

Many school districts are acting like Donald Trump – they are deluding themselves into imagining a reality that doesn’t exist and will not exist in the future, and causing further damage to everybody else in the process.

I’m not holding my breath, however, that many will show the same wisdom of the San Bernardino school district, which has read the writing on the wall and committed to full-time virtual learning for the rest of the school year.