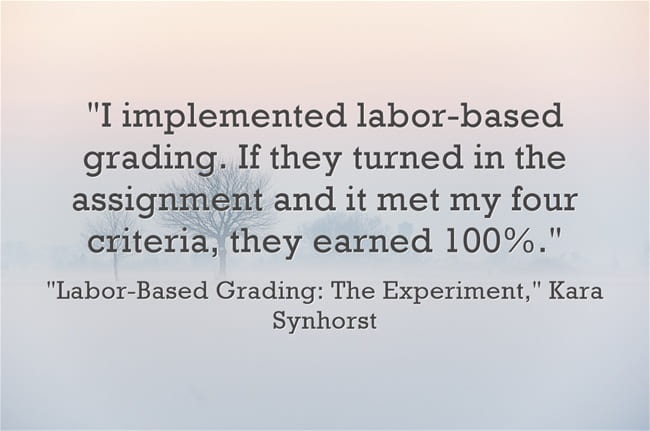 Editor’s Note: My colleague Kara Synhorst is trying something very interesting this school year, and agreed to write a guest post about it.

For several years, I’ve been doing reading to educate myself on anti-racist work. When our English department read about labor-based grading and the rationale behind it (I think we read an excerpt by Asao Inoue), I remember thinking that it sounded like a great way to make grading less subjective, and therefore less prone to being affected by my own implicit biases. It also sounded like a lot of work.

As an IB (International Baccalaureate) teacher, I attended two trainings recently in which the workshop leaders talked about IB “approaches to teaching.” In part, the ATL asks that the work be focused on conceptual understanding, differentiated, and based on inquiry. IB also encourages students to become risk-takers, something I struggle with. Because our students are so driven, they often worry too much about getting things “right,” and they stay within very safe boundaries, rarely challenging themselves.

And then the pandemic hit! Distance learning felt disjointed and chaotic, and the kids were stressed out.

I spent the summer trying to knit all these ideas and challenges into something cohesive. I decided that there was no better time to try labor-based grading than when I most needed to give kids a guarantee (a good grade if they just tried) and a boost. But labor-based grading still looked really hard, and it was only summer and I was already working full-time! I decided that for it to work, I would also have to really streamline the assignments I was asking for.

I decided to assign just one piece of homework each week. In my Language and Literature classes, they had to do the assigned reading, then demonstrate their understanding of a concept I’d taught in class. The homework always looks the same: Demonstrate your understanding of ________ in any format you choose.

Among the things I’ve asked them to demonstrate are the development of themes, tone, symbolism, archetypes, and the use of sound (in poetry).

I told the students that there are four qualities each assignment should meet:

It should have taken them between 30 minutes and two hours.

It should be the best quality they are capable of.

It should be clear to someone not in the class what they are trying to communicate.

They should understand their own purpose and be able to communicate it in a sentence or two.

Beyond that, they had nearly free reign: I encouraged them to write blog posts, letters, poems and song lyrics, to create slide shows and posters and comics, and to record podcasts and TikToks. I gave twenty-two choices but made it clear that if they could think of a way to communicate that wasn’t on there, it was probably okay, too.

Over the first three weeks or so, the kids were tentative. I got mostly writing pieces, and some slideshows. I answered a lot of questions, and showed examples of student work (with permission) that was risk-taking, but also received full credit.

I’m happy to say that in the 13th week of the experiment, I now have podcasts, artwork, short films, songs, dances, art, and creative writing coming in each week with no additional prompting. I’ve even had students submit assignments in embroidery!

One of the greatest benefits has been to me — I love seeing their creative endeavors and hearing their voices (some of the podcasts have begun to be quite lengthy!) and seeing their faces, when so often in class, their cameras are off.

Within that framework, I implemented labor-based grading. If they turned in the assignment and it met my four criteria, they earned 100%. There were some students who didn’t demonstrate understanding (perhaps they painted something, but it was unclear how it addressed the topic), so I would ask them in the comments on the assignment to explain their understanding, and most followed up. In fact, I found myself having conversations with the students in the comments section frequently. I also committed to giving them thoughtful, prompt feedback.

That’s not to say everything worked perfectly! Initially, I wrote out the grading contract based on Inoue’s (I found a sample online), but adjusted to meet my students’ (and our schedule’s) needs better. But at the end of the first quarter, some students were doing worse under the contract than I thought was fair: a single “ignored” assignment would have given them a D, and 2 an F. The language was also an issue: Inoue called late work “missing” and called missing work “ignored.” It was complicated and didn’t feel as aligned with their learning and effort as I’d like it to.

I held a brief discussion on one of our short Mondays about the grading policy to get the students’ feedback, and I took notes on what they told me. Many thought attendance shouldn’t count in their grade — part of the original policy I borrowed from Inoue — and I thought they made a good point! Like me, they thought the contract was overly complicated. But most wanted to be held accountable, and most liked the weekly assignments. A few who weren’t doing well even admitted that it seemed fair and they knew they could be doing better if they were turning in work.

I made some changes and shared them with the students. Now, their grades are based on percentage, but each assignment still earns them 100%. Only assignments they do not attempt (or that do not meet the requirements at all) count against them.

It does mean that sometimes things feel unfair to me: a student who produced a 15 minute video podcast complete with special effects and music earns the same score as a student who wrote a paragraph without capitalization. But I keep coming back to what it is I want for the students. I want them to be able to take intellectual risks. I want them to be able to make choices about their own education and how they express themselves. I want them to reach higher levels of understanding of the material we engage with (and many of the assignments they’re doing, like writing songs using the poetic devices we’ve studied, are much higher on the Bloom’s taxonomy scale than some of the writing they were doing previously). I want each student working to their own strengths and challenging themselves. And for the most part, that’s what I’m seeing.

Mr. Ferlazzo asked how many students have failing grades under my current system. It’s not zero, unfortunately. I have students who never attend class and whom I can’t reach by phone or email. I have students who attend every day and don’t submit work. I’m doing my best to reach out and offer help to them, including inviting them to stay during asynchronous time and demonstrate their understanding in a brief conversation in a breakout room.

Before the school year began, knowing that taking on distance learning, a new grading contract, and a new kind of structure for class work was a lot, I told myself that it was a weird year: if it didn’t work, I’d call a mulligan. So far, I’m pretty happy with the results, though I’m sure I’ll continue to tweak it and talk with the students about how it’s working for them. Will it translate to in-person learning? We’ll cross that bridge when we come to it. In the meantime, I feel good about having tried something new with an eye towards equity, and I’m enjoying the way I’m getting to know students through their creative and self-driven work.

Several readers asked if Kara would mind sharing the student hand-out she used explaining the system and including the twenty-three choices students have to demonstrate understanding.

Kara has graciously shared it here in a downloadable format.

“The Best Resources For Learning About Community Schools”