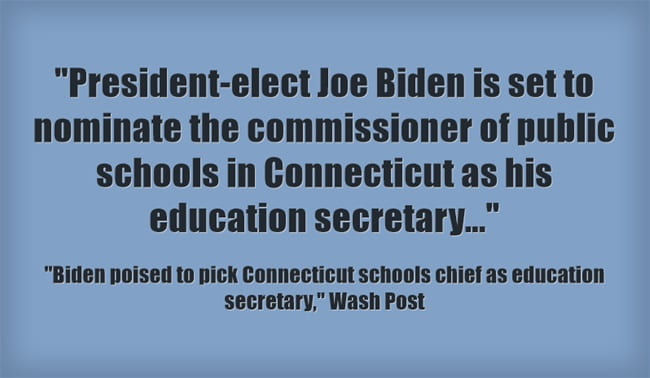 Biden poised to pick Connecticut schools chief as education secretary is the headline of an article in today’s Washington Post.

Here is an excerpt:

Miguel Cardona was named Connecticut’s top schools official last year and if confirmed will have achieved a meteoric rise, moving from an assistant superintendent in Meriden, Conn., a district with 9,000 students, to secretary of education in less than two years.

He was born in Meriden to Puerto Rican parents who lived in public housing. He began his career as a fourth-grade teacher and rocketed up the ranks, becoming the state’s youngest principal at age 28. He was named the state’s principal of the year in 2012.

I don’t really know anything more about him than is in the article, but he certainly will be a substantial change from Betsy DeVos, who may go down as one of the worse Secretaries of Education ever….

This article from the CT Mirror provides a bit more background on him: As Biden eyes Cardona for education secretary, focus is on how he handled school reopening

Refreshing to learn from this @EricaLG story that Biden's nominee for US education secretary, Miguel Cardona, was a "Spanish-only speaking student when he first started school."https://t.co/I6jnKKwYLP