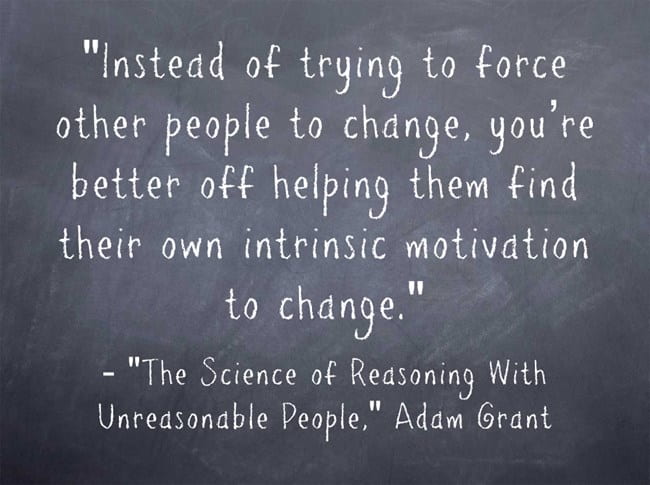 Adam Grant has a useful column in today’s NY Times, and it also contains a lot of great links.

It’s headlined The Science of Reasoning With Unreasonable People.

He provides helpful advice on how to talk with people who disagree with you and, in fact, reflects some of what I’ve written in Leading With Inquiry, Not Judgment.

However, I think it’s important to point out that I think this kind of advice comes with some limitations.

It makes most sense when talking with friends and colleagues.  In certain situations, it can work with strangers – for example, in the context of what is known as “deep canvassing” (see more resources on this at The Best Posts & Articles On Building Influence & Creating Change).

At the same time, however, I think we also have to recognize some important caveats:

One, if we want to use “motivational interviewing” (which is the strategy that Grant recommends), and if that means we’re dealing other people’s racist, homophobic or sexist beliefs, I think it’s then the responsibility of us whites (and in the case of sexism – white men) to apply it.  It’s a form of “privilege” to expect that the targets of wrongful behavior to show patience and flexibility towards those who don’t respect them.

Two, in a broadly political context, we have to recognize that there isn’t always time for “motivational interviewing” and often the greater good calls for straight political power to overcome resistance, such as the Biden Administration ignoring calls from Republicans (in the name of “bipartisan unity”) to reduce supporting low-income people in the face of the pandemic.

I often remember something that Martin Luther King, Jr. said:

“Morality cannot be legislated, but behavior can be regulated. Judicial decrees may not change the heart, but they can restrain the heartless.”

I’m adding this post to The Best Ways To Talk With Someone Who Disagrees With You.

The Best Videos For Learning About The Impeachment Process