How My ELL History Students Have Evaluated Our Class – And Me!

As regular readers know, at various times during the school year I have my students complete anonymous evaluations of our classes. I advise them that I always make the results public – to blog readers and to our administrators.

Sometimes that commitment results in unexpected situations, like the year The Washington Post picked up on one of my blog posts and published an article with this headline: NEWS BREAK (not breaking news): Teacher asks students to grade him. One wrote: ‘I give Mr. Ferlazzo an A at being annoying.’

I’ve collected many of those posts, along with other articles about the use of anonymous student surveys, at Best Posts On Students Evaluating Classes (And Teachers).

This post will review the evaluation done my by ELL US History students in our full-time distance learning class (theoretically, we may go to hybrid in May).  It’s the first post about a series of surveys I’ve been doing over the past month.

Most of the questions asked students to respond using a linear scale, with 1 being the worst and 5 being the best.

In an ordinary year, I would be disappointed with these results – I’ve usually gotten mostly 5’s.  However, this has been an online class for seven months in the middle of pandemic.  I’ll take it.

I’m a little surprised at these numbers –  class work is done in groups, and most students largely chosen their members.  Because of that, I would have expected there to be more 5’s.  I used to encourage some switching very two months or so, but haven’t done that since Winter Break.  I probably should encourage it to happen again but, to tell you the truth, I’m barely hanging on right now and I don’t want to do anything that might cause any additional class disruption or more work for me.  So I might just stay satisfied with these numbers.

When we use chapters from our history book, I read the first page to the class and then groups go into breakout rooms to read the remaining three-or-four pages.  One students shares their screen, and students take turns reading each paragraph.  At the end of each page, they list words that are new to them and write a summary for each page.  Even though they cooperate on it, each person has to actually write the same things on their own copies.  After they are done, one student acts as the teacher and uses Whiteboard.fi  to read phrases and sentence from the chapter to the other students in the group while they write them down on their copies of the whiteboard (while promising not to look at the chapter itself). The teacher then corrects their writing, if necessary.

It’s not as good as doing the same kind of exercise with mini-whiteboards in the physical classroom, but it works.

I’ll take these rankings.  Again, they’re not as high as they might be in normal times, but they could be far worse.

I’ve recently been trying an activity where small groups can choose one of four photographs about the era we’re studying and complete an image analysis where they first have to write what they see, what they know about the situation based on what we have been studying, what they think is happening and predict will happen next and, finally, list three questions they have about the picture (it’s a modified version of a sheet from The National Archives – I didn’t invent it).  Then, students present to a group that chose a different picture.

What can I say?  At this point, I’ll be satisfied with these ratings, and continue to do it every other week until school ends.

No surprise here.  I try to end each class with either a Quizizz, Kahoot, Fluentkey, or Messenger and Scribe Game reinforcing what we have just learned. 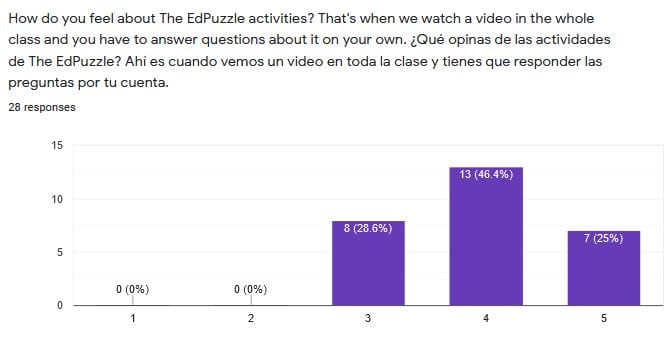 EdPuzzle has zillions of interactive videos. However, because our District has made terrible decisions about restricting video content on Chromebooks, the vast majority of them are blocked so students can’t watch them on their own or in breakout rooms.  So, I have to show the video while students answer the questions on their computers.

It’s not ideal (students have to either split their screen – if they know how – or switch tabs), but it’s a decent way for students to access content via short videos.

In the physical classroom, I’d show a video and stop it frequently while students would respond to my questions on mini-whiteboards.  I’d be able to interact with them and generate a discussion.  EdPuzzle is a poor substitute, but, hey, it’s distance learning and we’re in the middle of a pandemic.

I’m a bit surprised at these ratings – I would have thought they would be higher since students can watch them in groups and cooperate to come up with the answers.  And, at least when we started doing them, student reaction seemed more positive.

I suspect it relates to the video quality.  Nearpod’s video selection is pretty tiny and pretty dry.  It’s easy to upload any video, but then you have come up with the questions yourself.  I’m doing that for my IB Theory of Knowledge classes, and I just can’t afford the time to do it for US History, too.

All other secondary classes meet three times each week.  I volunteer my time to teach both of my ELL classes five times a week (of course, my students are not aware that I am unpaid).  Our district talks a good game about equity, and they certainly have had money to pay teachers of ELLs and other groups hard-hit by the pandemic to provide extra support to them, but they have chosen not to do so.

Attendance at my classes is good (though a bit weaker on Fridays).  But I certainly can’t blame students for not being thrilled at having to wake up a bit earlier two days a week (that’s when we have classes during “zero period”), and not being exciting at spending even more time on Zoom.

I was pleasantly surprised that students rated these so highly.  They make presentations at least three times each week, and they’re great opportunities to practice speaking English.  This generally gets lower-ratings when we’re in physical school, and I think the fact that they are online (usually with cameras off) makes them less nervous about speaking English to a group.

It’s obvious that they are learning less History than they would ordinarily learn if we were in a physical classroom, but our classes are not chopped liver.  I’ll take these ratings.

Each of my classes, including this one, has a leadership team of 8-12 students who are responsible for leading breakout rooms and who regularly evaluate the class with me (in this class, we actually de-brief for a few minutes after each class).   They also complete a weekly written self-assessment.

All my classes would be in pretty bad shape without them, and I would be toast.

Leadership team members need my help here in figuring out strategies on how to encourage the laggards.  But I think the problem here is that everybody is running out of steam.

I’m working hard, and I think that’s obvious to the students.

I was definitely pleased to see these responses:

i feel good and proud of my self

Yes and I improved a lot in myself.

I been feeling really well i think is a great time to help each other as English learners because we feel more confident trying to speak English with friends and also it helps me a lot to learn new things.

How i have felt in general about being a member of the leadership class team is pretty good because i feel like Mr. Ferlazzo is asking me for help and i like to help him.

I feel good teach some thing to my friends